1. Carry your gun more often. I know a lot of gun owners only carry concealed when they might be driving through a “bad” part of town or when they’re traveling far from home. But you and I know attacks can happen any place and any time. Even if you’re running out to pick up some milk at 7-11, how do you know someone’s not going to try and rob the place as you’re paying for the milk? Obviously, you don’t. The good news is, there are so many shapes and sizes of guns on the market that we have plenty of choices in what we can carry. You don’t have to always carry a full size gun, you can simply slip a .380 in your pocket as I often do. Never forget the oft quoted words, “the best gun is the one you’re carrying at the time.”

2. Go to the range more. Shooting is a diminishing skill, which is why you need to train as much as you can. I realize we all have busy schedules, but go to the shooting range at least once a month if you can, and even once a week if you can swing it. The best way I’ve found to help people make sure they get to the range is to have them put it down on their calendar. For instance, you could make the 1st Friday of every month your range day. If it’s written down in your calendar then there’s a much better chance you’ll end up practicing at the range. Of course, in between going to the range you should do dry fire practice. I spend at least 10-15 minutes a day dry firing and I know it helps improve my accuracy and will help improve yours too.

3. Take someone shooting. Over the years, I’ve discovered there are pretty much only two ways to convince someone that guns aren’t the “devil” and that shooting is fun. The first way is when someone comes to me who’s been the victim of a crime. They tell me that they used to be anti-gun but now realize they need a gun to protect themselves. I hate it when this happens and that people have to end up getting attacked before they realize why a gun is necessary. The second way to help someone get over their dislike of guns is to simply take them shooting. I’ve taken a number of people to the range that couldn’t believe how fun it was and instantly became hooked. So, this next year invite some friends and family to the range and help them see that guns and shooting aren’t that bad after all.

4. Keep your guns locked up at all times. There are still too many stories in the news about a young child finding a gun in his house and accidentally killing himself or a friend. In my opinion, your gun should be locked up at all times unless it’s on your person. I prefer the Gunvault and Stack-On rapid access safes, but there are dozens of safes on the market. Even if you don’t have children you never know if a friend visiting or a handyman or someone else might find your gun and end up killing or injuring themselves with it. Let’s make 2014 the year that gun owners always lock up their guns. Read about Project ChildSafe for more ideas.

5. Take care of your body. Use hearing protection when you go shooting so you don’t damage your hearing or what’s left of it. Also, make sure that every time you finish shooting you wash the lead off your hands and face, especially before eating, and that you take a shower when you can. If you have children, it is especially important that you don’t play with your kids until you’ve washed all of the lead off yourself.

7. Be more situationally aware. The “Knockout Game” is still in the news a lot lately and doesn’t seem to be going anywhere. That is why it’s critical to pay attention to your surroundings and not have your head down in a cell phone or iPad. The fact is, if you have good situational awareness it will hopefully keep you from ever having to use your gun to defend yourself in the first place.

8. Take better care of your guns. I’ll be the first to admit that cleaning my guns is not my favorite activity in the world. However, I know that the gun I’m carrying might save my life one day so I do make sure it’s cleaned often so it won’t jam on me. You don’t have to clean your gun every time you shoot but I would clean it every 500 rounds.

9. Find the right holster. One of the reasons people don’t carry their gun all of the time is because they haven’t found a comfortable holster. There are about a billion holster makers these days so quickly order a bunch of holsters until you find the one for you. Just make sure you know a company’s return policy before you buy so you can return the holsters you don’t like. 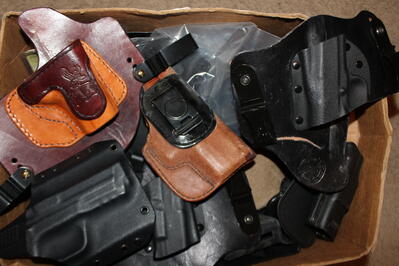 (The author's box of holsters, which he does use for his various guns)

10. Buy a gun. Despite what my wife thinks, you can never have enough guns. So buy yourself a new gun this year and check another gun off of your long list of guns you eventually plan to buy. You know you’ll love shooting it and testing out your new gun is a great excuse to invite someone to the range with you. (looking for some direction? Read the 5 key questions to ask before you buy a new gun)