12 Reasons I Concealed Carry A Gun 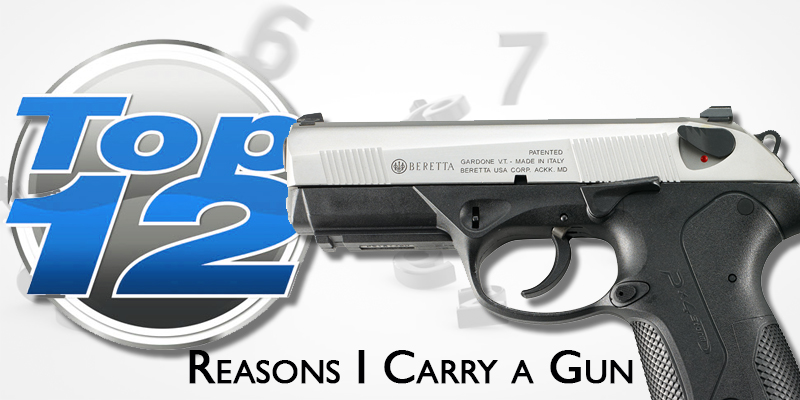 1. A fire extinguisher is a lousy self defense weapon.

No one seems to have an issue with folks keeping a fire extinguisher in the house, right? I mean, people don’t question your paranoia level even though there are fire departments just about everywhere. So I thought about just carrying a fire extinguisher for self defense too. I figured I could foam at least three people in the face before it emptied, and then it becomes an excellent impact weapon. After discovering that finding a concealed holster was near impossible, I gave up. 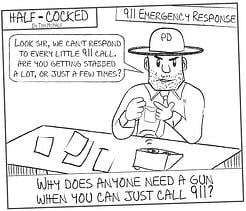 While crime rates continue to fall over the long haul, there’s still plenty of evil behavior to go around. Read any paper and you’ll see that crimes happen all over, not just in “high risk” places. Speaking of high risk places, if I ever thought I was going somewhere I might need to use my gun, you can be darn tootin’ sure I wouldn’t be going there in the first place.

According to USA Carry, that’s the number of warrants outstanding for felons across the US. They walk among us.

Before you write off this idea, think of the benefits. Although a tank has great offensive weaponry, you probably wouldn’t ever need it. You’re pretty well protected from just about anything other than rust. Just drive it into your garage and be sure to shut the garage door with your clicker before exiting the hatch. Also, remember to lower the main gun barrel before driving in.

5. Because Miss USA said people ought to learn to defend themselves.

As the Duchess of Defense discussed recently, it’s a good idea for anyone, not just women to learn how to protect themselves. While the world “should” be a place free of crime, it’s not. It’s up to you how you want to handle that reality.

I carry one gun because more than that is painful. Back in the day, I made a video for a Top Shot application and strapped 7 guns on - all concealed - just to show that it can be done. Well armed? Yes. Comfortable? Maybe about as comfortable as Piers Morgan at a Three Gun doubleheader. And no, I didn’t make the final cut for the show.

8. My powers can only be used for good.

Just Texas? Nah. In Florida, one is twice as likely to be attacked by an alligator than a concealed carry permit holder.

So why all the concern about why you can and can’t carry? Because irrational hoplophobia.

9. As awesome as the police are, they can’t get to me fast enough.

Law enforcement can be a thankless job. Ask William. I’m sure he’ll have more to say about that in future columns. You have to be dedicated and willing to risk, well, everything, in order to engage in that career choice. That’s a lot of dedication to preserving public safety. But any police officer understands, and will admit, that they are minutes away when seconds count. Seconds. No one can respond to a crime before damage is done, no matter how dedicated.

I find I am far more aware of my surroundings and circumstances when carrying a gun. Not because I want to get involved in something, but because I want to avoid things. A road rage argument on the road? Nope. If I’m carrying a gun, I’ll let the other guy “win” and continue on my way. Suspicious looking people? Nope. I’ll take the long way around. Dark alleys? Nah, even though I love scary movies, I won’t do dark alleys in real life.

I’m not at all suggesting that I will deter crime with my gun, or by showing it. That’s stupid, and almost always illegal. I am suggesting that when it’s well known that a goodly sized part of the population carries guns, criminals are much more thoughtful. Big house (prison) surveys of inmates indicate that what they fear most are armed citizens. That disrupts work plans.

12. Rights can be lost through atrophy. And apathy.

Imagine if we all stopped believing that we could say what we want, or write whatever blog articles we want (gasp!) What if we started asking permission to speak or write? What if we started to look for prior approval of speeches, articles, letters, pictures and videos? When you stop using rights, they can be lost through atrophy - and apathy.

No one gave you the right to free speech or the right to bear arms. Those are pre-existing human rights that are only protected by those we choose to put in positions of power. When we stop acting like those rights are absolutely natural, they can be taken away.