5 Stand - When There's Not Time for Sporting Clays

For those of us that may be lacking in the time and money department, of getting a round of sporting clays in, there is an alternative: 5 stand. The set up takes much less space than a sporting clays course. It  requires a lot less walking and saves a considerable amount of time. You may even have a chance to win some bets against your best buddies, or in my case, against your spouse!

5 stand is a cross between trap, skeet and sporting clays with the advantage that it is more action packed than trap, has more crossing/flying patterns than skeet and is faster and less expensive than sporting clays.

I mention 5 stand in comparison to sporting clays because of the wide variety of targets thrown. No 5 stand set up you shoot will be exactly alike. One similarity they will all have is that there will be 5 shooting stands, or stations, to shoot from.

How to Shoot 5 Stand

The clays will be thrown from between 6 to 8 throwers. Throwers can be placed ahead of the shooting stations, to the left, right, straight ahead and even behind the shooter at assorted yardages. The traps will be aligned to throw various crossing, sliding, dropping, and some of the most challenging (and my favorite) stand and fall patterns that replicate overhead teal. 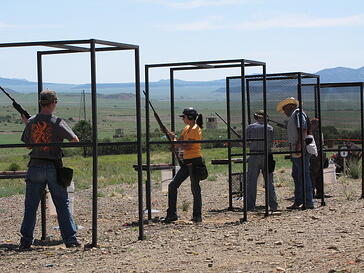 The shooters rotate from one stand to the next until they are back at their starting stand.

Here is part of the fun of 5 stand. While, clays are flying from the left, from the right, shooting straight up in the air and zipping overhead, a scorekeeper is keeping track. Score is kept as to who busted the most clays. Scoring is quite simple. Whoever broke the most clays in the end wins!

Tiebreakers are sometimes necessary because you simply cannot have two winners. In the event of a tie, a shoot off will take place with the top scorers taking a stand. The shooters will shoot the menu lines at their stands, starting with line one and progressing to line three. Whichever shooter misses a clay first gives up the chance at first place to their competitor.

At first the game may sound a bit complicated, but you will get the hang of it in no time at all. In fact, my daughter's YHEC team picked it up in no time at all. It is a fantastic warm up for a sporting clays competition. It is often a highlight with youth shooters at the range. As a matter of fact, there is often a waiting list, so you better get signed up now.