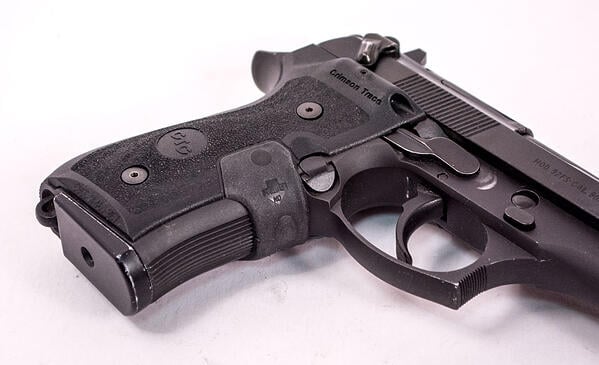 If you want to start a bar fight, just bring up the topic of using lasers on handguns. Although they’ve been mainstream for years, there’s still an amazing amount of controversy, disinformation and downright bunk floating around out there. With that in mind, we figured it’s time to do a series of articles that together, will offer a comprehensive guide to handgun lasers.

We’ll start off easy with this first installment and cover the different types of lasers that can be used with a handgun. Later on, we’ll get into the harder stuff like benefits, myths and misconceptions and tactics. Ready? Let’s go…

When it comes to types of lasers, we need to think in two dimensions. The first relates to how a laser is integrated with the handgun. The second addresses the method of activation. That’s fancy terminology for “how does it turn on and off?”

Many handguns have removable grips (or stocks if we’re being really traditional.) This presents a great opportunity for laser manufacturers like Crimson Trace to build replacement grips with laser functionality inside of the grips. Generally, batteries and electronics can be hidden in the grip panels themselves and the laser lens, aiming adjustments and housing can be molded into the top of the grip panel. The laser beam will travel from the top of the grip, alongside the frame of the gun and forward to infinity. Since the laser is high on the frame, it’s only offset from the bore of the handgun by an inch or less - slightly below and to the side. Even still, you can adjust the angle of the beam to make it coincide with the point of bullet impact at any distance you like.

Lasergrips are a great solution for a number of reasons. As the laser is built into the grip itself, there are no significant changes to the shape and size of the gun. If you have a holster for your gun, odds are that the holster will work just fine when you add Lasergrips. There are no extra pieces to knock off or damage either. It’s a very discreet and natural solution. 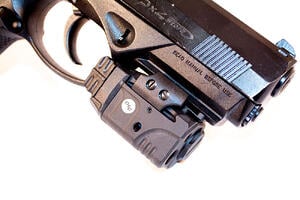 Many newer handguns, like the Beretta PX4, feature one-piece polymer frames. The grip is part of the gun frame itself, so there are no removable panels that can be replaced with Lasergrips. Fortunately, many of these guns have Picatinny rails in front of the trigger guard. As these rails are standard width and shape, manufacturers can develop accessories (like lasers) to fit there.

The benefit of a rail-mounted laser is that you can add a laser (or laser / light combo) to virtually any handgun equipped with a rail. On the flip side, you now have a new piece of gear under the barrel, so you’ll need to find a compatible holster.

Some handguns, like the Beretta Nano, are compact and smooth, so they do not have a sharp-edged rail segment up front. Companies like Crimson Trace and Lasermax develop custom lasers that wrap around the underside of the frame and attaches to the trigger guard. It’s a little bit like a rail mounted laser, except it doesn't require a rail and is made for a specific gun model. As with rail-mounted lasers, you’ll need to make sure you have a compatible holster as there is a little bit of new bulk from the laser housing.

Yet another option, available for some handguns, like the Beretta 92 and 96, for example, is a guide rod laser. Located in the frame, just under the barrel, the guide rod exists to make the recoil spring behave as it compresses and expands. Lasermax has figured out how to make a replacement guide rod that has all the batteries and guts of a laser right inside. Just replace your guide rod with the laser-equipped one and a beam shoots forward just underneath the muzzle of your handgun.

The big benefit of guide rod lasers is that they add no bulk to the exterior of your handgun. Whatever holster you had before will still be fine. As the laser is already lined up with the barrel, there is no need to adjust the angle of the beam either.

The other consideration, when choosing a laser, is the method of activation. How do you turn it on or off? While each has a different button, switch or lever, there are two basic approaches to the whole question of how to turn the thing on.

All Lasergrips (that I can think of) feature what’s called instinctive activation. In english, this means that the button is placed in such a position that the natural act of gripping the handgun turns on the laser. Some models have a pressure pad on the front of the grip, others on the back and some on the sides. In any case, a firm grip causes pressure to be applied from your firing hand and the laser turns on. If you regularly practice, you can easily learn how to apply the right amount of pressure to turn your laser on and off at will.

The benefit to instinctive activation lasers is that you have nothing to worry about or remember. If you every need to pick up your gun in an emergency situation, the laser will be on. There’s no need to remember to flip a switch. Many models do have a master power switch which allows you to disable the laser if you're practicing at the range, so you don’t run down the batteries prematurely.

Many rail-mounted lasers have paddles or levers that you press with the trigger or support hand finger to turn on and off. When you pick up your handgun, these lasers will be off until you decide to turn them on.

Guide rod lasers also have a separate activation switch. In most cases, the guide rod laser will come with a new takedown lever that serves the purpose of activating the laser.

Some people like the control of a deliberate activation laser. If you don’t want that beam for any reason, don’t turn it on. Instinctive activation fans like the fact that they don’t have to think about activation during a stressful incident.

In my experiences, I’ve found that I prefer instinctive activation. I’ve been in too many shoot house training scenarios using manually activated lasers where, when finished, the instructor smiles at me and says “You know, you have a laser. It might have helped if you had used it!” Ummm. Yep. I guess I never turned it on…

Next time we’ll get into a detailed discussion of benefits of handgun-mounted lasers, so stay tuned!