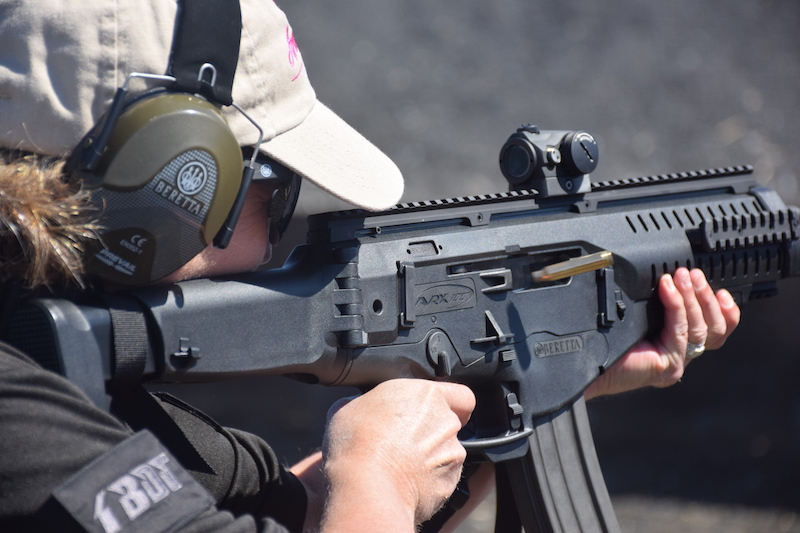 I was very fortunate to be invited to participate in Beretta’s 1st Tactical Summit held at the elite Academi training facility in Moyock NC. Top gun industry writers from all over the country attended to get hands on training with the full line of Beretta tactical firearms. Just getting the chance to learn about these combat guns from the team from Beretta would have been amazing in itself, but in an effort to make this a fully experiential opportunity, Beretta brought in an exceptional team of top tactical instructors from all over the country to put us, and the equipment through the paces.  The result? An over the top, in depth, hands on full immersion into the nooks and crannies of these guns, the depths of real tactical training and the core of Beretta’s mission and values.

Deep at the core of many of the women who desire to own a firearm, is the need, yes need, to have the confidence and ability to protect themselves and their families. This new awareness and transition into the role of self-protector is still rather young and a bit underdeveloped for many.  I believe many of us women fall into the first ring of self-protection as we have come to know it thus far. The gun is purchased, some basic training is taken, they practice regularly and in their naiveté, believe themselves to be prepared. Are they better prepared? Absolutely. Are they fully prepared? I don’t think so. This incomplete sense of competence needs to be replaced with a new, expanded horizon of defensive and tactical training. This is part of the progression towards becoming a warrior, which takes time, understanding and training to grow into the full awareness of what it truly means to become a fully developed warrior and to confidently use the tools to be one.

To go further into the realm of tactical training is going to require women getting over a few even larger hurdles than they have already cleared to where they are now. The mindset and the gory realities of what it takes to survive are a bit out of the emotional comfort zone of many women, and let’s face it; it’s a bit intense.

Having to acknowledge the brutal and vile truths of a war to survive against an enemy or enemies whose depravity goes beyond comprehension is just tough for this gender. Add to that the even more testosterone rich world of tactical training laced with the “rough and tough, get it right or else” training style, and you have a high hurdle for many women to clear. It is time for women to go deeper and we must make a way for them. This does NOT mean softening the training, as there is no greater growth and refining than that which takes place in the fire, but rather bring an awareness of the challenges women face along with the understanding that we have journeyed far from a different reality and live out this new role of self-protector a little differently than a man. This will help to forge the training side of the bridge.  I will work on expanding the knowledge and understanding of what is required to begin to build the other side of the bridge.  To truly be educated, equipped and empowered to successfully protect themselves and their families, women must travel to and train in the world of tactical training.  So let’s build the bridge!

Now back to the Berretta Tactical Summit. So, which comes first, the gun or the shooter? For Beretta, it is clearly the shooter. Every firearm they make starts with the shooter. His or her needs, whether on the battlefield, the hunt, the range or in the home are the starting places from which the gun is designed and built.  The corporate culture of passion and commitment to meet the needs of the shooter was incredibly inspiring and was demonstrated not only by the staff present at the summit, but represented in the research, development and manufacturing of each and every product. With its awesome 500 year history and its partnership with the US Military, Beretta not only is the history of manufacturing firearms, it also is directly connected and woven into this country’s rich military strength, something that is a source of genuine pride in the Beretta culture.

Now for the guns we had the chance to shoot and the instructors we were privileged to train with.

Beretta celebrates 30 years of the M9 being the combat pistol for the US Military.  Although there has been some controversy over this gun, much of which is fiction, there was something very special about holding it in my hands. The M9A1 Tactical Pistol is the upgraded model with added features based on input from Military and law enforcement agencies around the world.  We had the thrill of training with Ernie Langdon, who is on staff with The Police Policy Studies Council and has been an adjunct instructor for Beretta USA, Sigarms Academy, Smith & Wesson Academy and the Surefire Institute. His impressive resume goes on and on and boy does he know the M9!  Although this is a ‘larger’ gun and a bit difficult for my small hands to reach some the controls. I had no trouble managing the trigger. The double action trigger pull was surprisingly manageable and it shot smooth, accurately and flawlessly. It was an honor and a joy to shoot this gun!

I have had limited experience with Carbines, so to get dropped head first into training with Pat Rogers owner of E.A.G ,Tactical, with one of the biggest, baddest fighting machines, well let’s just say was AWESOME! I did however, earn the nickname of Grandma from Pat, so I clearly have some work to do with a gun like this! Everything was adjustable on this firearm and it is completely ambidextrous, even the ejection port and charging handle were quickly and easily switched from right to left. No tools are required for any of the adjustments or for take down, something I really appreciate about this gun. I again, with my smaller hands had some real difficulty in manipulating the controls without the use of my non-dominant hand and it was rather weighty, wich began to take its toll on these Grandma arms, but the recoil, although substantial, was manageable and provided quite a rush.

When it came time to don the Steiner Optics night vision gear, a first for me and quite an experience, I was hard pressed to work the controls, obviously something that comes with familiarity with the gun and larger, stronger hands. There was ample room on the picatinny rails for the flashlight; infrared/visible lasers and scope leaving room for more add-ons.  As I shared with Pat, I am now in Carbine Love!!

Shooting a long-range sniper rifle was a first for me, and what a joy it was! Shooting at 400, 800 and 1000 yards is quite an awesome experience. To then get to give it a shot in pitch black with night vision scopes, took it over the top. Having to wait for a deer and bear to move off of the range was pretty special too.

John “Doc” Spears was our expert instructor. John is a weapons and tactics, precision rifle, CQB Operations, No-Light, and TCCC instructor as well as a spinal surgeon, so yes, we can just say brilliant and a pretty darn nice guy too!  I learned the basics of adjusting the rifle for elevation and windage as he shared the trigonometry on his unique training aid, the side panel of his white van with a dry erase marker!  I was astonished at the accuracy and precision of these rifles and gained a little bit of insight into the world of a sniper.

Although this is a bit hard to say considering the firearms and training I had experienced over these few days, this gun and shooting it was my favorite. Steve Fisher owner of Sentinel Concepts who stands multiple feet taller than me and who has the nickname of “Yeti”, was our instructor for this discipline. I was a little intimidated at the thought of having to be put through shotgun hell with him, but let me just say this man is a master instructor with the right mix of drill sergeant and comedian. Steve was one of the primary instructors at Magpul, and has 15 years of law enforcement service in various roles. His career as a trainer started in the 90’s, first at NTFT and then later as the owner and lead trainer of Michigan Defensive Firearms Institute. 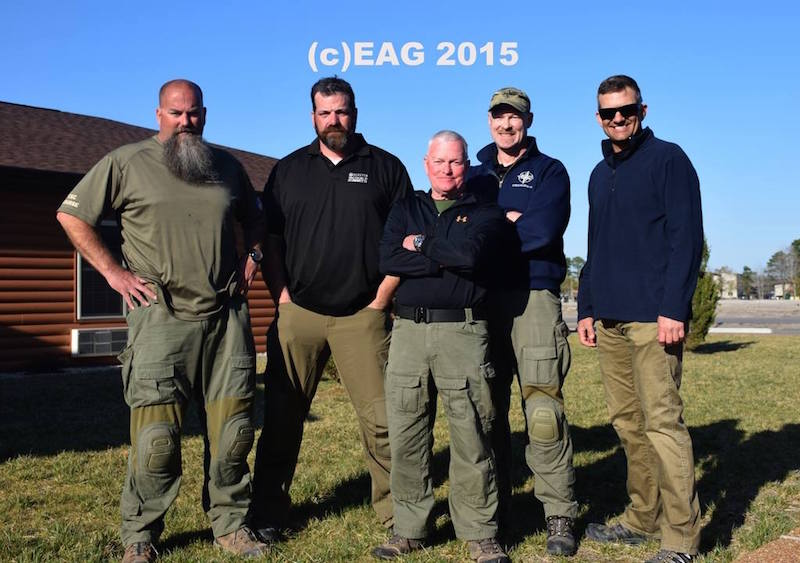 I honestly have to say I thoroughly enjoyed shooting this shotgun. I understand in new ways, just what a great shotgun in trained hands with a great load can do. It was lightweight with surprisingly very manageable recoil (6lb, 6oz empty). It has an oversized bolt handle, bolt release, magazine release and reversible safety. Paired with extreme grip checkering and the standard with Ghost Ring Sights (Yes, despite what you may have heard, you must aim a shotgun!), make this a very effective shotgun when the adrenaline of a life or death fight interferes with fine motor skills. These are significant features for a home defense shotgun for anyone, but especially a woman.  I can’t tell you how many spent shells hit the ground during these three hours, but I could have kept shooting.  With its BLINK gas operating system, which claims to cycle 36% faster than any other shotgun on the market.  I was back on target pulling the trigger extremely quickly.  I will definitely be purchasing this shotgun!

After all of this shooting (And Tylenol), I come away energized with a deeper understanding and respect for Berretta, for the writers who are committed to providing accurate and informative articles to gun lovers across this country and for the community of tactical trainers who devote their lives to help us all on our journey’s to become warriors. Thank you Beretta for letting me participate. 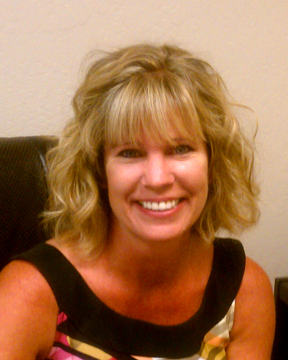 As a firearm enthusiast, and NRA certified handgun instructor, Carrie has set her sights on opening and expanding the world of firearms to women, working to “demystify” the unnecessarily confusing and intimidating male-driven industry.