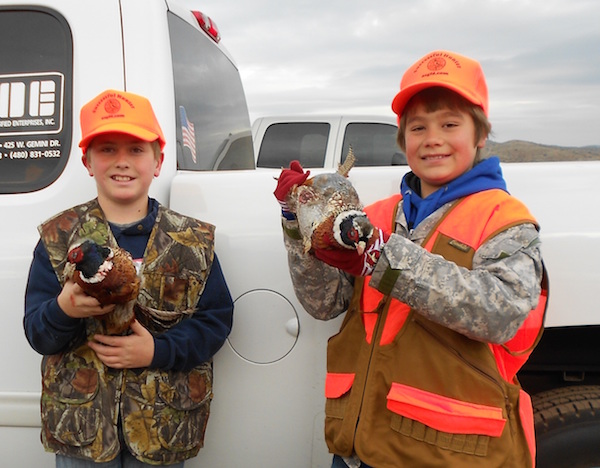 Those who’ve never seen the sun rise over the winter desert have missed one of God’s most spectacular creations. First, there is a narrow strip of tequila sunrise color sharply contrasted by the jagged black skyline. The gradual warming of the cold eastern sky illuminates the highest hills behind you first, turning them into a warm pink color while the desert floor stays dark. The shapes of the washes and ridges bristle with prickly pear and manzanilla bushes. Gradually, almost imperceptibly, it becomes daylight. On this morning, a thin veil of clouds covered the sky for the YMCA’s High Desert Youth Pheasant Hunt promising to keep the dogs from overheating, even if the kids were a little cold.My first western hunt was for chukars with a tall, tough Arizonian named Ken Middleton and his beloved Pete, an Elhew pointer who raised his leg to pee in celebration of every retrieved bird. Ken, Pete, and I hunted the YMCA High Desert Hunt Club as a diversion after spending four days walking the aisles of SHOT Show. As we hunted, we talked about the importance of passing on a love of the outdoors to the next generation and Ken described a youth hunt where kids who successfully completed their hunter safety course were drawn to get a special pheasant hunt right there at the High Desert Hunt Club. 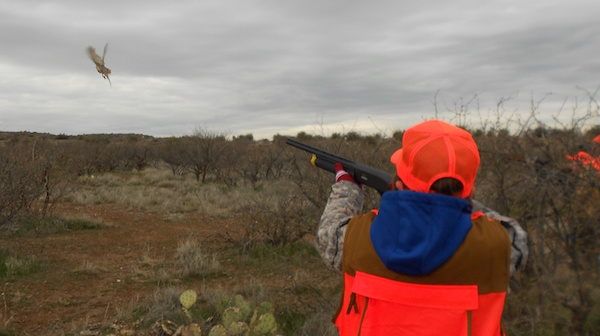 After that desert hunt with Ken, we talked on the phone several times. I’d ask about Pete and Ken would say we’d hunt again next time I was in Arizona. Like all new friends, we planned for the future and expected to hunt together again. Then I called and got a non-working number. Ken’s website disappeared off the web and I wondered what happened. A year or so later, I learned of his death. I also learned that Pete had died just a few weeks after his master.

There’s an intangible joy that comes from being present at a life changing time in a child’s life. It’s why we become Hunter Safety instructors, Little League coaches, or any of dozens of ways we can give something back to the sports we love. To those of us who mentor young hunters, though, it’s somehow more gratifying, because hunting and the process of providing food from nature’s bounty feeds us as a species on a more primordial level. It is an instinct in us that’s awakened when we harvest one of God’s creatures, dress it, and partake of a meal with those we love. It’s something in us that needs to be fulfilled. It is why we hunt. 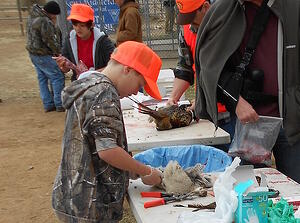 I stood behind the action for that first shot of the morning. I took in the pictures, the smiles, the high fives, and the stroking of feathers. I walked behind a young man with a few long feathers sticking out of his game vest and I swear, he was at least two inches taller. He was different and we all could sense it. I ate lunch with him and his dad and saw the pleasure on his face as we relived the hunt.

There should be more events like this. Youth Hunts are an opportunity for young boys and girls to see dogs work for the first time. They’re a day of confirmation for those instructors who put their time into the preservation of hunting. They’re a day for young men and women who aspire to be hunters to become hunters. It was a pleasure to be a part of the event and see that everyone who attended went home feeling better than when they came.

By happenstance, Mark Middleton, the son of my friend Ken, had googled his Dad’s name about a month before and found a magazine story I’d written about our hunt with Pete and those chukars. We talked on the phone, reminisced about Ken and Pete, and Mark told me he was following in his Dad’s footsteps, training dogs and boarding them at On Point Kennels. As we talked, I thought of how Ken had been successful in raising his son with a deep respect for the outdoors and looked forward to meeting Mark in person. On the afternoon of the youth hunt, I had the pleasure of meeting Mark who was handling dogs for the event.

When most of us take our last breath, there are those who mourn us but few of us truly leave a legacy for the world to see. It was a complement to Ken that Mark has turned out so well but Ken’s legacy goes a lot further than that.

The Youth Hunt Ken was so proud of has been happening at the Chauncy Ranch for about a dozen years. For the last two years, the Hunt has been designated as the Ken Middleton Memorial YMCA Youth Hunt. You can’t imagine how gratifying it was to see folks wearing tee shirts and hats with Ken’s name on them during the 2012 YMCA Youth Hunt. I found myself wishing Ken could see all this, men from their twenties to past his age, spending the day mentoring the hunters of tomorrow, young people wearing blaze orange and smiling, youthful faces. I’m not sure whether we have any insight into this world once we’ve passed to the other side but I envisioned Ken’s spirit hovering over that hunt, his Ithaca 20 gauge double in one hand and the other stroking old Pete’s head while his son, Mark, carried on the legacy he learned from his dad.

I feel blessed to have had an opportunity to have known Ken, to have met Mark, and to have had a chance to be there for the hunt. Most of all I feel blessed by having a love of the outdoors passed on to me by men like those volunteers and my friend, Ken Middleton.

The YMCA High Desert Hunt Club occupies 4500 acres if Arizona high desert hill country. There are 8 hunting fields for the total of 80 kids who participate every year in the youth hunt. The event is held over two weekends two weeks apart with 40 kids participating. The event is sponsored by YMCA High Desert Hunt Club, the Arizona Game and Fish, the National Wild Turkey Foundation, and Safari Club International. The kids are selected from about 500 kids who’ve taken the Hunter Education Course during that year, with some selection emphasis on kids who wouldn’t otherwise have such an opportunity. Kids get orientation, go out on the clays field to shoot targets and then go in the field with a dog handler and a Hunter Safety Instructor. Each youth hunter has three rooster pheasants to hunt up with a 90% success ratio of the kids getting a bird. For more information, contact the YMCA High Desert Hunt Club.