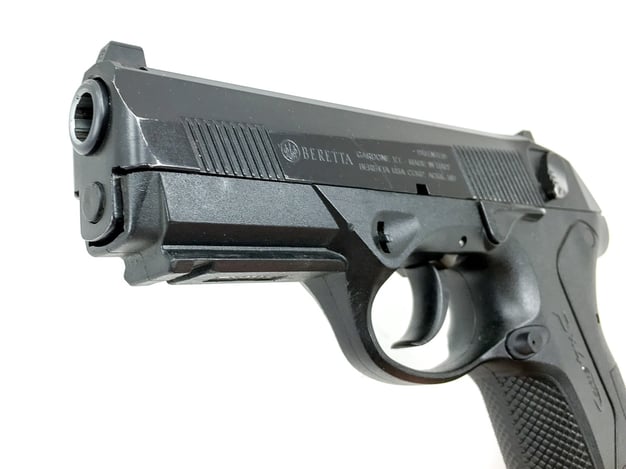 Walk down the firing line of any public pistol range, and you'll see people having a grand ol' time throwing rounds downrange towards their target. Most of the targets will have a great many holes scattered about them with no visible rhyme or reason and no evidence of any marksmanship skills at all.

But yet, if you ask those people if they can shoot, to a person, they'll say "Yes," even though their targets are saying things to the contrary. So what is "being able to shoot," and how do you get better at it?

Also See: How Natural Point of Aim Can Improve Your Handgun Accuracy

First off, let's face facts: Shooting is fun. Lots and lots and lots of fun. Pulling the trigger and making your pistol go BOOM and then seeing a hole appear somewhere in the target is fun. It's more fun, though, (a lot more fun, if I may say so), to pull the trigger, hear the boom and see the hole appear in the target exactly where you desire. Marksmanship is a skill, and like any other skill, it takes work to develop, and that work begins with realizing you're not as good of a shot as you think you are. However, you can be, if you want.

Remember that old joke about how many psychologists it takes to change a lightbulb (One, but the lightbulb has to want to change)? It's the same with improving your marksmanship skills. If you keep going to the range and shooting the same target the same way, nothing is going to change, and your skills are not going to improve, and, most importantly, you are not going to out-shoot your friends.

There are lots and lots of articles out there which list out a variety of steps you can take to improve your pistol marksmanship, but all of them seem to miss one important point: Where the muzzle of your gun is pointed when the bullet leaves the barrel is the direction your shot is going to go. Therefore, it is imperative that the muzzle of your gun is pointed to where you want your shot to hit before, during and after the trigger is pressed. Anything that interrupts that process will result in a missed shot.

That simple concept drives everything there is to know about marksmanship. A bad grip affects where the muzzle of the gun is pointed when the bullet leaves the gun, as does a bad stance and poorly aligned sights. And, because it's the last action you take before the gun goes bang, moving the trigger smoothly without disrupting your sights becomes very, very important to hitting your target.

Let's walk through each of those steps, and talk about them in terms of keeping your pistol pointed in the right direction when the bullet goes flying downrange. These tips assume you want to improve your ability to hit the target in a defensive or practical shooting competition because there are different techniques used you're looking to shoot a bullseye match or a silhouette competition or other specialized sport.

Simply put, the more you have your hands on the handgun, the better you can control it. On a semi-automatic pistol, I prefer to start out with wrapping my primary hand around the gun and making sure the web of my hand is as high up as it can go on the back of the grip, because this will help drive the recoil of my gun straight back, rather than force the pistol up into the air.

The support hand is a vital part of a good grip, and keeping as much of the support side palm on the grip of the gun plays a big role in developing a stable, consistent grip. Avoid the "teacup" grip by keeping the support hand away from underneath the pistol: That support hand is going to be a lot more useful if it's gripping the gun and controlling recoil. And don't be afraid to grip the gun hard, because a strong pistol grip will overcome any effect doing so might have on your trigger press (more on that later).

When your pistol goes off, a large amount of force is transferred to your hands from the recoil of the gun going off, and that force is then transferred to your arms and then to your upper torso. This action is pretty much the same thing that happens when you punch something. Therefore, a proper fighting stance from boxing or karate or any of the martial arts is also a good stance to use with a pistol. Keep your feet about a shoulder's width apart, with your support side foot slightly ahead of the other one. Make sure your knees are relaxed, and your elbows slightly bent. Rather than fight the recoil of your gun with just your arms, use this stance to absorb and re-distribute the recoil to the rest of your body.

There are many different types of pistol sights out there, but all them are designed around the idea of giving you a visual representation of where your muzzle is pointed, some with greater success than others. No matter what you choose, if you have conventional a front post and rear sight on your pistol, learn how to keep your eyes trained on how the front sight is lining up with the rear notch before, during and after the trigger press. No, that is not a natural function: We humans are predisposed to look at the problem, not what's in our hand. However, getting used to looking at the front sight and how it's aligned with everything else will help you learn how to point the gun naturally and quickly at the target, no matter how near or far away it is.

And now we come down to the most crucial element of reliably hitting what you're aiming at: A smooth and consistent trigger press. This is important because as I said before, moving the trigger is the last thing you do before the gun goes bang. You can do everything else correctly, but if you move the trigger with a jerk that throws your sights off-target, your shot is going to miss. There are many different ways to get to a smooth trigger press, but one that I've found effective is imagining that your trigger finger is moving back to touch the center of your chest. No matter what mental tool you use to get a smooth trigger press, practice it regularly because shooting is a perishable skill.

Learning all of this is best done under the watchful eye of an experienced firearms trainer because having a neutral, trained observer watching you shoot is a quicker way to learn than trying to figure all of this out for yourself. And remember to have fun as you hone your skills, because shooting stuff is fun, but shooting stuff well when you want to is even more fun.