3 Concealed Carry Tips For People With A Disabilities 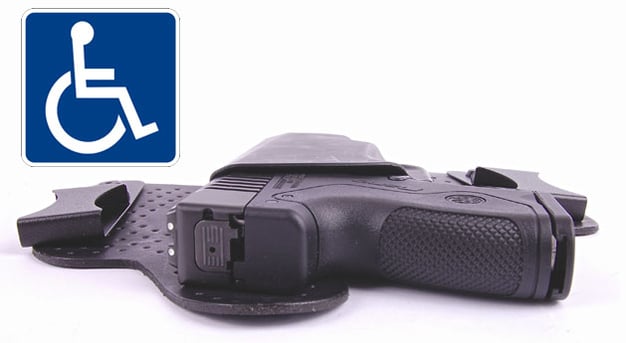 I was diagnosed and treated for a rare muscle tumor when I was 17. The cancer was so rare that I was only the 7th person diagnosed with it and the first person to ever survive it. I was sent to St. Jude Childrens Research Hospital in Memphis, TN which is an awesome hospital and I strongly recommend that you help support they hospital with donations or fundraisers.

You may also like: 3 Problems With Carrying A Gun While On Crutches
I spent 6 months in treatment and have been in remission since December of 1997. Eventually the side effects of the radiation treatment set in and the scar tissue in the radiation area set up like concrete. I reached the point where I couldnt move my left hip or knee. I walked with a very pronounce limp.
In March 2010, I broke my bad leg. My femur snapped where the good bone and the irradiated bone met and the bad bone shattered into 3 pieces. Two years, ten months, two surgeries, a bone graft and two titanium rods later (the first non-slip rod slipped), and I am still on crutches and will be for the foreseeable future.
The bone started mending after the second surgery but the healing is slow due to the poor circulation in the radiation area and also due to the poor condition of my femur bone. The doc was shocked when what looked like dead bone started healer. I guess it was just mostly dead. Thanks to God for the miracle of the human body.

Ive told you all of that so that you can know that I know what it is like to live with a physical disability. As you know from my previous posts, I now have a concealed carry permit and have been working out the best way for me to carry a concealed weapon.
Here are 3 Tips for folks with a disability that conceal carry:
Dont Let Someone Else Tell You What Is Best For You  talk to people, get opinions but when it comes down to it, you need to carry what works for you. Dont let someone tell you that you should be carrying a .45 for the stopping power when your arthritis will barely let you use a .22. The choice of a carry pistol has to be what works best for you.
When is comes to how you will carry concealed, you will need to figure out what works best for you with that too. In your case, a lot of the recommended conceal carry techniques and holsters may not work for you. Dont let someone else tell you what is best for you. You need to work it all out in a way that best suits your needs.
Practice Your Way  Once you have the best method that fits your situation, practice, practice, practice. This applies to everyone but more so to someone with a disability that might impede their ability to draw their weapon. Sorry but thats just the way it is.
Dont Carry a Gun  I know that sounds radical but hear me out, if your disability doesn't allow you to draw or shoot your pistol or allows an attacker a more than average chance of taking your pistol away from you, dont carry one. You are responsible to be able to defend yourself and your loved ones. If your disability makes carrying a pistol a danger to others either by your inability to fire the weapon safely and accurately or by the potential of your weapon being used against others then you should seriously consider not carrying a pistol.
Instead, you could carry a knife and tactical flash light. In a pinch, those two items are quite effective. I am not sure where I heard this saying but is has stuck with me (I am paraphrasing): Someone can take a gun away from you without getting shot, but no one can take a knife away from you without getting cut.
Author: Jason Parks - You can follow Jason on Twitter @thejasonparks