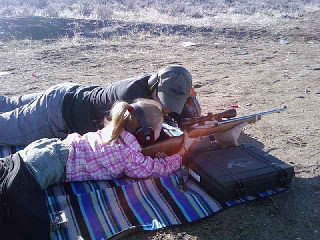 Have you ever wondered where all of these women shooters are coming from? They are everywhere; at the range, at gun stores and they are even going to gun shows! It’s like they are crawling out of the woodwork. Even the color and shape of gun gear is  changing because of them all. They are EVERYWHERE.
Did they just appear out of nowhere, are they some new form of creation?  Where did they all come from and how did they become such good shots?  It actually isn’t all that mysterious. Many have just been busy being girls and since the world of shooting for the most part, has been a “manly” culture,  they have left it to them. But as with most things, the times have changed. The door has swung wide open for women and they are skillfully and happily - stepping over the threshold.
Many in fact aren’t new to shooting at all.  If you ask them you are likely to hear that their father showed them how to safely use a firearm when they were young. They will share their fondest memories of falling on their behinds because of the recoil, or of hitting the bullseye on their first shot and the shocked look on their dad’s face at the sight. Time with dad is a very special thing to a young girl and they remember every minute of their times shooting together. For many it was one of the few places where they could really connect with their fathers. They will lovingly give him the credit for teaching them about safe gun handling and for making them such good shots. Many share that they had put these times and the guns behind them to move into womanhood to assume their roles as wife, mother and/or professional. But, as I said, the times have changed. Necessity drives many of these women to return to their roots and pick up a gun again to protect themselves.
What great gifts for a father to give his daughter; precious time with him and the skills to safely handle a firearm. As so many women are sharing their memories of shooting with their fathers this Father’s Day and how grateful they are because of it, I hope the dads of today continue to invest in their little girls and realize that it is about so much more than guns.
Happy Father's Day!