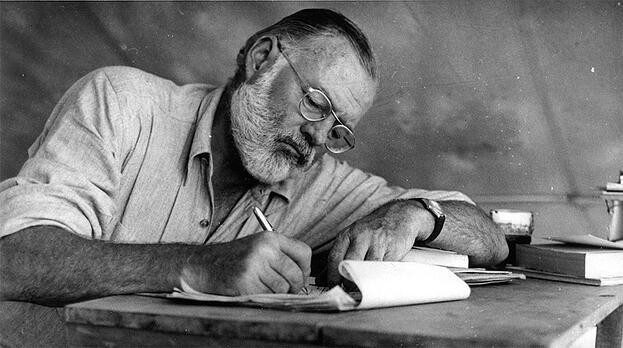 This is a guest post from Guns.com. Check out Guns.com for news, original content, product reviews and editorials with a focus on objective journalism, quality and, above all else, guns.

A lot can get done on a name alone and when you’ve been making guns (or doing anything) as long as Beretta has, you tend to realize the value of this. That’s why we’re looking at a couple big names that changed the world but when it came to shooting, chose Berettas:

Ernest Hemingway
The origins (or even actual history of use for that matter) of "Papa’s" famed Beretta SO3 aren’t necessarily black and white, rather they’re tinged with a foggy, green hue not unlike the world after a few too many Mojitos. After the author’s death in 1961, Beretta No. 5991 was auctioned

off by Abercrombie & Fitch in 1963 after consignment from his widow, Mary Hemingway.
Following a crooked trail of order slips and half diary entries, we can surmise that Hemingway was duck hunting in Italy (hunting out of a Venetian blind, as he put in) in 1948 and 1949 but no sooner. He makes mention of new guns purchased during this trip (and documents from Mary support this), though neither party names the maker and Beretta’s own records indicate that Hemingway bought the gun at Armeria Caccia, a sportsmen outfit on Venice’s Via San Marco, in 1947. Such inconsistencies have lead some to question the authenticity of the gun, which was evidently shipped back to him in Cuba after his ’53-‘54 safari, during which the master of American letters weathered two bush plane accidents.

Also see: The "Trident" story - what does the Beretta logo mean? 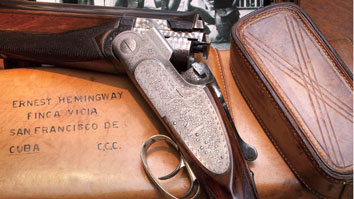 Also curious, the gun, which is now on display at the Beretta Gallery in New York City, is stamped S3 rather than the standard SO3. No explanation has been made available to account for this anomaly.

Steven Spielberg
Though he gave us miracles of modern firearm depiction like Saving Private Ryan and Band of Brothers, many will be surprised to know that Oscar-winning director Steven Spielberg is also something of a shooter himself and for many years his favorite gun was his Beretta SO4.
As the story goes, back in 1988, Mr. Spielberg turned royal heads when he participated as a "novice" shooter in the Jackie Stewart Celebrity Challenge Shoot— Stewart himself was a legendary shot gunner and racecar driver with ties to the Beretta. Despite his relative inexperience, Spielberg finished among the top male competitors and even shot a perfect score on one event, making seasoned attendees blush.
In fact, it’s believed that during this shooting exhibition, Spielberg, along with fellow shoot participant Harrison Ford, caught the elusive ear of King Hussein of Jordan and secured royal permission to film in the Petra—the locale that would become the backdrop for the classic final scene in Indiana Jones and the Last Crusade. Up until the event, Spielberg had been denied access.

And there are signs he still had Beretta on the brain years later. In Minority Report, Tom Cruise holsters a Beretta 9000.

Among those who know him, the Desert Storm Commander’s affinity for Beretta has been something of a fixture of his personality for a long time, not the least bit apparent in his longstanding friendship with the Beretta family. An avid hunter and collector of fine shotguns, Schwarzkopf stayed in contact with his friend Ugo Gussalli Beretta throughout the late '80s and early '90s.

In 1993 while the General was vacationing at Lake Garda, he couldn’t resist the temptation to sneak off to visit the Beretta factory. This marked one of the last facility tours company visionary Pier Giuseppe Beretta took part in before his death.

Schwarzkopf received a personalized Beretta SO6 on that trip, but according to a Times of London interview, Schwarzkopf's favorite Beretta was an SO5 he received in 1991 also from the Beretta family. He reportedly calls this gun his "baby".

James Bond
Or Ian Fleming, rather. Or Sean Connery for that matter.When 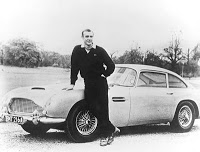 Fleming penned Casino Royale in 1953, his use of actual names and models for the guns mentioned was pioneering; most contemporary works of fiction simply referred to a gun by its caliber and its relative size (i.e. a .38 or a large .38). Fleming drew predominantly upon his own experience as a British Naval Intelligence Officer during WWII when picking out an arsenal for James Bond but he admittedly only possessed a passing interest in firearms and he was ignorant of the specifics needed to bring the heightened degree of realism he wanted to the novel. Accordingly, Fleming consulted renowned London Gunsmith Robert Churchill about the guns in Casino Royale (who, reportedly, corrected numerous misspellings of the name "Beretta").

And of all of Bond’s guns it is his .25 Beretta, not his signature Walther PPK, that generates the most 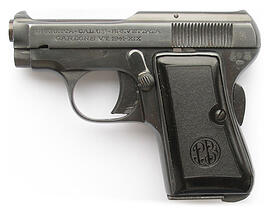 controversy among fans of the 007 Canon. An import from Flemings' days of carrying a Browning .25 automatic, the "very flat .25 Beretta automatic with a skeleton grip" which Bond carries is described by characters throughout the novels as a "fancy looking" ladies gun. The Beretta Model 418 gets modified for deep concealment in Dr. No and gets a silencer in Diamonds Are Forever. Some believe the choice of caliber—a .25 centerfire—is actually Fleming’s response to critics who thought the gun and caliber were wimpy.

For his own part, Sean Connery shoots Beretta too. He also participated in the Jackie Stewart Shoot, which marked the first time "Sir Thomas" ever picked up a shotgun.