Responsible gun owners: Don't Give Up!

A few months ago, gun control was a rare discussion at the dinner table, on the news, or around the water cooler. It felt like the winds had changed and we were heading for calm waters.  Then a storm erupted, and now gun control seems to be front and center on everyones mind. The tragic misguided actions of a few disturbed people have turned the spotlight on us, the legal, responsible, safe gun owners and firearms enthusiasts of America. Unfortunately, that spotlight is full of misguided rage and ignorance.

Everyone seems to have an opinion about gun control these days, including politicians, journalists, actors, musicians, soccer moms, the mail man, and even my brothers dog, who barks every time certain politicians show up on the TV.  Ive been taking it all in, from day one, but the reactions Ive encountered at the range over the situation are truly amazing.

Ive heard gun owners say that nothing is going to happen.  There wont be a ban. Nothing else is going to infringe to our rights. They arent that stupid. The votes arent there. I wish I was this optimistic.

Ive heard from shooters who are concerned, but aren't taking action.  Other than panic buying like everyone else, they just dont seem to want spend time fighting for our rights.  Im worried, but I dont know what to do.  I wish I was this apathetic.

Ive heard from gun owners who are already throwing in the towel.  We cant win. Were going to lose something; its just a matter of what. No way can we stop this steamroller, after such a deplorable act.  I wish I could give these people hope.

So, what are you doing Phil?  Ill tell you, but first let me tell you what I am not doing.

I am contacting my legislators.  I know, does it really do anything?  I honestly dont know, but its something I can do.  Id wager some of the people screaming for gun control are doing so because the talking heads on TV, their favorite actor, or their Facebook friends are telling them it is the right thing to do.  Im also going to wager these people wont go the extra mile to write that letter or make a phone call when the next gun control bill hits the floor for a vote.  If I can get just one more letter or phone call in than the other guys, its a win.

Im increasing our numbers.  Im already a member of a popular 2nd Amendment lobbying organization, but Im also persuading others to join, including family, friends, my brothers dog, and anyone else who will listen.  I gave gift memberships for entire family (even you Mom) right before I wrote this.  I want to make sure every gun owner that I know is a member of one of these organizations.  Maybe I can persuade a few non gun owners too.

Im not letting the media bias break down my resolve. Bias, agenda, whatever you call it, its there, whether we like to admit it or not. I am standing firm, no matter what they spew at us.  At the same time, I am not shying away from the other side either. As frustrating and illogical as some of the facts and opinions out there may be, Im paying attention to what they are saying. Im thinking about it, thinking about what drives it, thinking of ways to discuss it, and thinking of ways to argue against it.

Im being a responsible representative for gun owners.  How?  By communicating with people about the 2nd Amendment and safe, responsible firearms ownership in an effective, non-argumentative or aggressive way. Its proven difficult for me at times, trying to remain calm, and discuss the situation without letting emotion take over.  If you are passionate enough to be reading this, you have probably felt the same way.  I am seeking out people who want to discuss the issue.  We shouldn't force a discussion on anyone, but if I overhear one happening, I am jumping in.  Engaging in calm, collective debate, and making folks understand that the criminals all over the nightly news are NOT indicative of the typical legal American gun owner, is our most effective tool right now.  Im putting these folks in my shoes, showing them what gun ownership means to me, what I have gained from it, and teaching how important it is to all of us.  What better way to educate people about guns than friendly conversation with an actual gun owner?

Im remembering who the real enemy is.  We could have a healthy debate on this one, but I tell myself that many of the people calling for gun control are not our real enemy.  Our real enemies are fear and ignorance.  Yes, the person blaming us and our guns for the deaths of innocents isnt our enemy, their misguided ideas are.  Its very hard to stay above the emotions and rage often inflicted upon us, but we have to, at all costs.  We must prove that the stereotype of gun owners is not correct.  We must rise above and be better than the illogical ideas and the false fears.

Im reminding myself that we all have a common goal.  Gun owners and anti-gun folks alike all want the same thing in regards to recent events.  We want to never again turn on our TVs and see a scene like the one from Newtown, or Columbine, or Aurora.  We just have differing views of how to accomplish that goal.  Its hard to look past that sometime, but we have to keep that in mind, no matter how emotional this issue gets.  If we can devote some of this energy we are using against each other into a common solution, we might just be able to accomplish this goal.  I know that there are those among us who will always seek to infringe on liberty, but we would have an easier time standing against those people if they didn't have the terrified masses behind them in the wake of another tragedy.

Im shooting!  Of course!  This is the most important thing we can do!  We have to keep the spirit of the American gun owner alive, now more than ever!  Matches are still happening.  The thrill of the hunt is still waiting.  There is practice to be done.  There are lots of new shooters who need a guiding hand or a basic firearms safety education.  Ammo needs loaded.  Lots of guns at the gun shop need a new home!  Admittedly, its sometimes difficult to keep a smile on my face and enjoy the range time with my friends and family, given the seemingly enormous mountain of obstacles ahead of us, but keeping my passion alive reminds me why I must continue to fight the good fight.

Lastly, Ill tell you what I am going to do if we are hit with new gun control legislation.  Im still not giving up.  I will keep shooting.  We must all keep shooting.  We will change our gear, adapt our rule books, and do whatever else we need to do to keep our guns running.  We have no choice.  We owe it to every American who has ever served or given their life in defense of this country and the Constitution.  We owe it to ourselves, our families, our friends, our communities, and all who have lived, or ever will live, under the Stars and Stripes.

Im finishing this post with an important picture.  It's not a gun, or a flag, or an eagle, or anything else commonly seen as patriotic.  It's picture of the Safety Officers and Staff from the 2012 PA State IDPA Championships.  I had the pleasure of working with this motley crew in running this match.  What does this photo have to do with the 2nd Amendment battle we are facing?  Everything.  These folks are the reason I am fighting.  Of all the things I have gained from being a gun owner, nothing is more important than the people I have met, the memories we have made, and the memories waiting to be made, on and off the range.  There are doctors, lawyers, police officers, housewives, students, mechanics, and active and retired military in this picture.  They are all safe, responsible, legal American gun owners.  Some of them are my oldest friends, some of them are new friends, but every single one of them is a member of my family.

They are your family too. Dont give up. 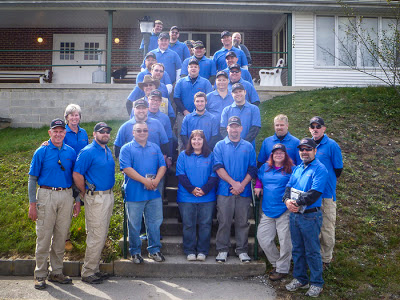