Learning to Shoot with your Weak Hand - Firearms Training

When you go to shooting school there are a number of things you will learn before you ever fire a shot. One important thing you will be taught is how to determine which eye is your dominant eye and to shoot with the correlating hand.

Your dominant eye is the one that looks directly at an object. It is easy to determine. Extend your arms with your palms facing straight ahead. Bring your hands together with your thumbs facing one another. Overlap your fingertips and thumbs to form a triangle of space. Next, select an object in the distance and look at it through the hole formed by your hands. Now close your right eye. If you can still see the object, you are left eye dominant. If you can no longer see the object, you are right eye dominant.

If you are right handed, but left eye dominant (or vice-versa) this is called cross dominance. It is simply the situation that occurs when your dominant eye and dominant hand are on opposite sides of your body. Determining eye dominance is important because of the variance in depth perception when you are looking at a target versus looking at your gun sight.

There are a number of techniques shooters with cross dominance can practice and still use their strong hand. You can close the dominant eye thus focusing with the eye which is on the same side as the dominant hand. The shooter can try placing a small piece of scotch tape on the dominant eye lens of their shooting glasses. This blurs the dominant eye and forces your weak eye to take over. Another technique includes shifting the gun toward the weak-handed side so the sight is in front of the dominant eye. These techniques can be used with pistol and become effective with lots of practice.

There are a couple reasons it is invaluable to learn to shoot with your weak, non-dominant, hand. One is to be able to keep both eyes open. In regard to long gun shooting moving your head or shifting the gun to get your dominant eye behind the sights as you would with a pistol is simply impossible. 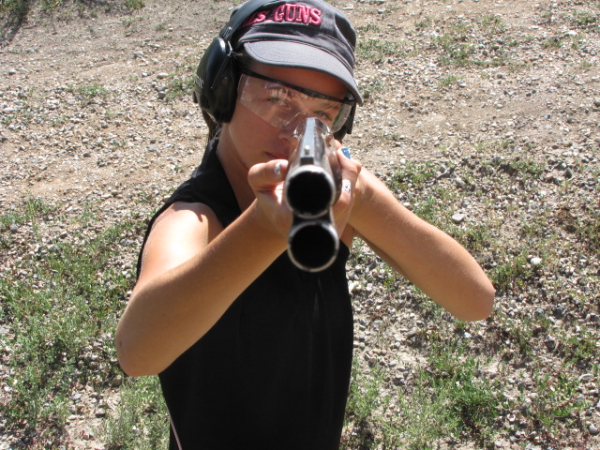 Shooting with both eyes open can be important for hunting, target shooting and personal protection. If you are pheasant hunting or target shooting, you can see the bird, or clay, as it launches from your weak side. The peripheral vision gives you an added amount of time to mount your gun and acquire your target. The same can be said in personal protection. If you have to close your eye, you may not see another attacker coming from the side. Having both eyes open gives you a greater field of vision.

I am mentioning eye dominance because it seems, my dominant eye has changed over the years. It is becoming more difficult for me to shoot moving targets.

Here is the problem. If you put the shotgun in line with your dominant eye and have both eyes open, you see a smooth line down the barrel and the sight at the end. Try switching hands and mount the gun in front of your non-dominant eye. Open both eyes and look down the barrel.  The view is almost one of double vision. The barrel may appear crisscrossed with two sights at the end. This is one reason you end up having to close an eye to shoot.

I decided to learn to shoot with both hands. I took my pistol, rifle and shotgun to the range to attempt shooting with my weak hand. Overall the shooting went well. I had a fairly good grouping with both the pistol and rifle. I thought the shotgun would be the challenge of the trio, but I was pleasantly surprised as I shattered eight out of ten clays.

With the pistol I fumbled around a bit when I approached the line to practice. The grip felt awkward as my right hand fought to be in charge. Next, my thumbs had a challenge as they argued with the safety. My muscle memory told my right thumb to flip the safety. With the new grip, the left was in the way. I took my time and worked this out. Next, I practiced releasing the magazine.

When I felt safe and comfortable with my new grip I sent a few rounds down range. The trigger-pull felt fine, and my shot grouping was fairly good. The most difficult undertaking of live fire was the old habit of closing my left eye. Ultimately, it was the muscle-memory from years of shooting that presented the largest challenge.

Shooting the rifle offered no huge obstacles. I shot from a bench and remained steady. After this experiment I believed shotgun would be the most difficult since I would be shooting at moving targets. 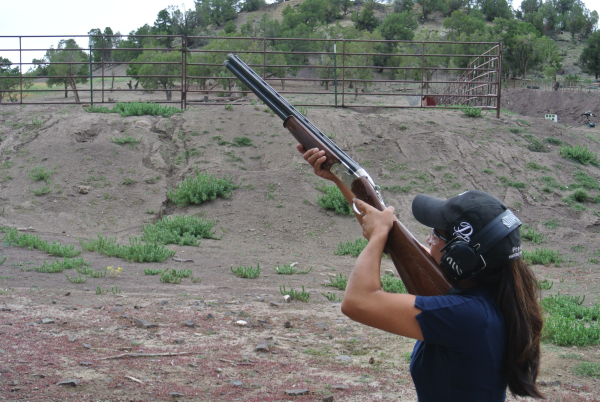 I practiced mounting and swinging the shotgun before going to live fire. I had to place the opposite foot forward which opened up my stance, allowing me to swing through with ease. I was able to focus with both eyes open much easier than I had at the pistol range. I felt more relaxed in my movement and confident in my shots.

At the shotgun range, I was using a Beretta Silver Pigeon 12 gauge. I have used this gun over the years and have always been able operate the break action with ease. When I switched to my left hand, I was a bit awkward opening the action and catching the spent shells with my right hand.

After this personal test, I am certain anyone can practice and become quite proficient with both eyes open using their weak hand.