When I first started duck hunting, we didn’t have layout blinds. It’s not that they weren’t available, we just couldn’t afford them. A pit blind was out of the question too, as where I lived, they were illegal. So we camo’ed up the best we could and pulled nasty old burlap feed sacks over our feet. Honestly, we did pretty well. Either we did a pretty good job of getting covered up, or we had dumb birds. Either way, it worked.

Many years ago, I was working my way through college behind the counter at a local sporting goods store. Every year, the day or even the night before the firearm deer season would open, some guy would always come in and buy a shiny new deer rifle. He’d always buy a scope too and I’d mount and bore sight it for him. Without fail, he’d buy only one box of ammo, because he was planning to go hunting the next morning. Yeah, without sighting the rifle in, or even shooting it first. I got so I’d ask where these guys were hunting, so I could be far away from them. And without fail, at least half of them would come back in and demand the rifle be returned or fixed because they either missed the deer or just hated the gun for some reason.

I bring that story up because now you’ve gone and got yourself a bright, shiny new layout blind. Maybe you were like me when I started hunting and have worked your way to affording a blind. Good deal. Layouts are not only more comfortable to hunt from, they do a better job at concealing you from the birds. As the season goes on, and those birds are getting shot at more, the more concealment you can get, the better.

So what do you do with your blind now that you have it? Good question. There are some good instructions in the box about putting it together, but there’s a lot more to it than that. You can’t just throw the thing together and hope it magically works the first morning in the field. You’ve got some serious setup work to do, but don’t worry.

Take your new blind out of the box and set it up either in your house or yard, if it is nice and warm out. Most  blinds are made of  very heavy-duty nylon material that is going to be stiff and hard to work with at first. Let it warm up first. Take your time and set it up slowly. Just because it’s tough doesn’t mean you can’t wreck it.

Now, take it outside and let it sit in the yard for a day or three.  Let the sun bleach out some of the shine of the fabric. Part of the problem when using heavy nylon fabrics to make blinds is that we want to buy something that is going to last for years of hunting. To do this, the fabrics get treatments to resist rot and tears. We also want them to look good, so we buy camo blinds. It looks great and helps us be more successful in the field, but all of these treatments together makes for, you guessed it, a shiny new blind. You’re not going to hurt or damage in any way your blind by letting it sit out in the elements for a few days. In fact, the next step goes way beyond letting the blind get a little sun. 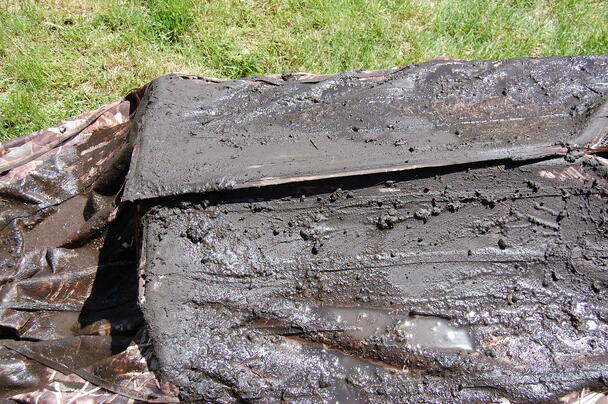 Remember when you were a kid, how much fun it was to play in the mud? Well now you get to do it again. Taking a bucket and mixing up a good slurry of mud. You then take an old mop or paint brush and give your blind a good coating of nice thick mud. My wife saw me doing this the first time and yelled at me, thinking I had gone nuts. You let the mud dry and then shake or sweep it off. It helps take the UV edge off the blind and helps it blend in better when you’re brushing the blind in. I know it sounds weird, but it works. If you have little kids, get them to help. My kids get really happy when I bring home a new blind because they know that not only will they get a cool fort to play with in the back yard for a few days, they’ll also get to make a big mess with mud and not get yelled at. My wife, well, she used to not be as happy as the kids, but now that she’s hunting out of one of the blinds too, that’s better.

You want to do the same steps whether you’re using a camo blind or one of the khaki-brown blinds. Same process goes for those of you with dog blinds too. 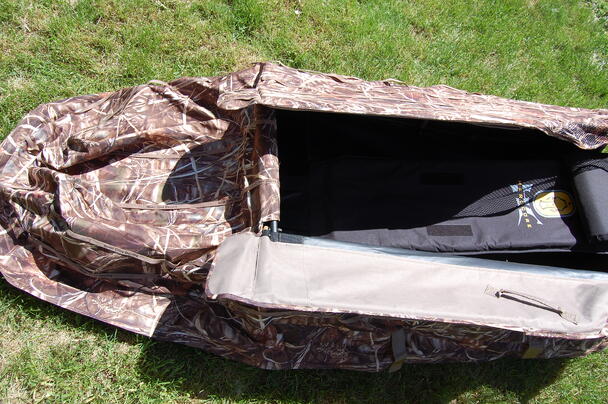 If you know where you’re going to be hunting, it is ok to start brushing out the blind before you go. Yes, the camo helps, but you need that depth and extra realism of brush to conceal the blind right. Synthetic blind materials are available to help match the conditions. I have a harder time finding longer green materials for those early season hunts in alfalfa fields, I’m always stocking up on green blind materials so I can properly brush the blinds in for that time of year. Then I switch it out as the season moves along. By the end of the season, I’ve usually got some much stuff tucked and piled on the blinds, they don’t look anything like they did when I took them out of the box.

Go hunting! The best compliment I ever got about my hunting stuff from one of my good buddies who hunts with me. He wasn’t out one morning due to work, but came by the field and saw all these geese. He pulled out his binoculars and watched for a while before calling me to let me know he was watching all these geese in my field.  As he was telling me about all the geese, I opened the blind and waved to him. He not only couldn’t tell the decoys weren’t real, but he never saw the blinds, even with good binoculars. 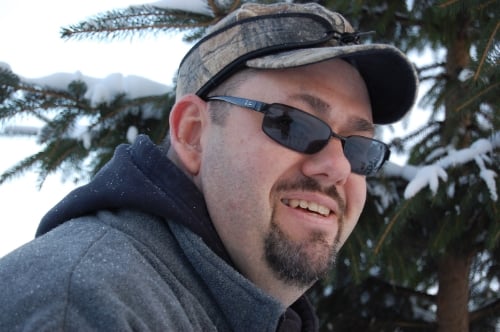