Clay Shooting Advice from an Olympian 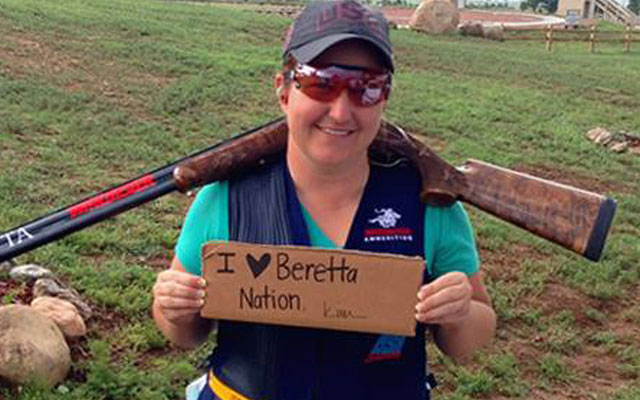 Each year thousands of people make a great migration to the Shooting, Hunting, Outdoor Trade Show (SHOT Show). It is the industry’s largest trade show and is attended by retailers, media and other industry professionals. This year was a bit different for me. My daughter, Lea, was finally old enough to take along. She had an amazing time meeting colleagues, suppliers and learning about products. While she was there she worked on intern and homework assignments.

Lea had a lot of work to do, but a highlight was meeting clay shooting Olympic athlete, Beretta shooter, Kim Rhode.

Also see: Clay Shooting Tips: The Straight Away Target - Easy to Hit and Easy to Miss

When Lea learned she would possibly see Kim Rhode, she was extremely excited. Kim is a HUGE mentor to my young shotgun shooter and many others as well.

The day came and it was time to meet the highly decorated Olympian. Nervousness could be felt in the air as we awaited her arrival. If you’ve ever wondered what it’s like to meet a real live hero, just ask my daughter. She was sweaty. Her heart raced and when Kim finally appeared, there was nothing but silence.

Her huge eyes peered at the medals as Kim laid them on the counter “Atlanta, Sydney, Athens, Beijing and London.” They shined under the lights. After a bit of stammering, “ums” and “ah’s”, the awe-struck teen finally developed the nerve to ask the ever-friendly Olympian some questions. 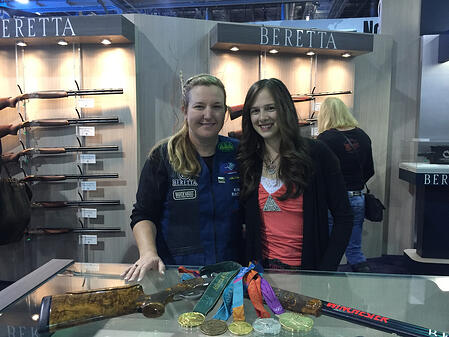 Lea - How did you get into competitive shooting?

Lea - Did you ever consider shooting competitively in .22 or any other events?

K.R. - A little know fact. I actually did compete in .22 rifle. At 10 or 11 years old I started off in the junior NRA program at the local club. I did good. I won the clubs and stuff. To keep my interest, they had a shotgun program they did once a moth. It was through that program that I was introduced. With the moving targets and crushing in the air, I was hooked. That was the beginning of my shotgun career.

Lea - Do you remember your first competition?

K.R. - I don’t remember the very first competition, but I remember some of the early on competitions. Back in the day I used to shoot a lot out at Fresno and Bakersfield. They had the state shoot there. We would go down just past the end of the skeet fields and play in the river. A couple times I almost missed my shoot offs. They were calling for me and had to come fish me out of the river because I was down there swimming. Those were the good old days.

Lea - Do you ever have a bad day of shooting?

K.R. - I think everybody has bad days. I would be lying if I said “No.” I wish they were all fantastic and perfect every day but that isn’t the case. How you overcome those obstacles and how you work through it makes you a champion. It’s what keeps you coming back again and again. If it were easy, you wouldn’t really appreciate the win or what it took to get there. So yes. I have those bad days, and I miss. The trick is, as I always say, not to miss when it counts the most.

Lea - How do you shake off a miss or a bad day of shooting?

K.R. - I don’t think your really shake it off. It’s one of those things where you kinda accept it, try to work through it and figure it out. Don’t get frustrated or discouraged or mad because that’s only going to cost you more birds in the long run. Your goal is to stay strong, keep going and win the competition. It’s never over until it’s over. I focus on the basics and go back to what I know to figure it out. I take it one target at a time.

Lea - Do you have any advice for young competitive shooters?

K.R. – Focus on drilling targets, not shooting rounds, and working stations. Be honest with yourself and recognize what your problems or fears may be at a certain target or station. Overcome them. That’s really what it’s about. When you get into a match you need to know you can win. Step out on that line and have the confidence to go for your goal or your dream. Put yourself out there. That is key to being successful in this sport. You have to have the desire to never give up.