Concealed Carry Tips: How to Improve Your Situational Awareness 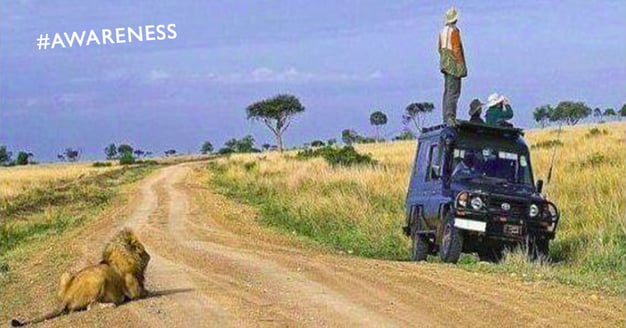 There’s an old saying that goes something like this.

Sounds, simple, doesn’t it? The hard part is the avoidance. Before you can avoid something, you have to know it’s headed right at you. If the “detect and avoid" part was easy and came naturally, the Titanic would be an obscure footnote in history.

For some people, awareness and powers of observation come naturally. My wife could walk through a restaurant with her eyes closed and then proceed to tell me physical descriptions of everyone there along with a pretty good rundown on what they were wearing and how many of them ordered the Escargot appetizer. Unless I'm really intentional, I generally won't notice if a Yeti in a clown suit was playing the accordion and singing the Davey Crockett theme song. The point? Like most people, I have to deliberately “switch on” to be usefully aware of my surroundings.

Let’s talk about a few ways that you can improve your awareness, which can help how effective you are when carrying a concealed carry handgun. If you want to sound all tactical in front of your friends, you can tell them that you’re training your “situational awareness.”

Put Down the Phone

Have you ever just glanced at your phone for just a “split second, ” and something happened during that time? To the point where you were surprised, and possibly scared, at how long you were completely unaware? It’s happened to me, and it’s a very unpleasant feeling. Just knowing that you were “switched off” for far longer than you thought - to the point that something catastrophic could have happened before you had any idea what was was going on.

Being curious, I decided to unofficially time a quick text message check. I usually keep my phone in my front pocket, so I include the time to withdraw it, press my finger on the unlock scanner, switch to the text app, and read the most recent message.

Here’s the point. Even during the duration of a “quick text check” a whole lot can happen. Someone that wasn’t even on your “potential threat radar” could materialize in your face from a long ways off. If the threat is in a vehicle, that distance is even further.

The best gun fighting skills in the world won’t protect you as much as being continuously aware. If you’re in public, walking, standing in line, or waiting on a friend, keep the phone in your pocket or purse and check it at a time when you can afford not to pay attention to your surroundings.

Consider this way to make success more likely. If you focus on positioning yourself in such places and ways to make observation easy, you won’t have to work as hard. Here are a few tips to get you started.

Put your back against the wall. Whether standing or sitting, use architecture to your advantage. If you're positioned in such a way that a solid wall or building is behind you, then you’ve just reduced the area you need to observe by half. Without the need to keep tabs on what’s going on behind you it’s easier to naturally and casually focus on what’s in front.

Choose your seat wisely. While you can’t always select your table or area, you can almost always decide which chair you want. When sitting in a restaurant, choose the seat that faces the door. The noise and motion of people coming and going will usually get your attention so that can spot anything unusual. After you consciously choose the “observation seat” a few times, you’ll find yourself doing it subconsciously as a habit.

Aisle seats in large rooms or theaters serve a similar purpose as putting your back to a wall. Positioned on one side or another it’s easier to see the whole room without having to keep track of a 360-degree environment. As a bonus, it’s a heck of a lot easier to get out in the event of a fire or other emergency.

A natural response when trying to be intentional about improving your awareness is to try and observe, process, and store everything. You can’t do it. There’s simply too much information in just one daily scene much less all of them. That’s OK, however, you don’t need to process everything. Most people you see or interact with on a daily basis aren’t threats anyway, so why try to observe and remember everything about them? So how do you observe what’s important while avoiding processor meltdown?

That sounds rude, but it really isn’t. Allow me to explain. Every environment has its rhythms. You know, normal behavior, people, activities, attire, and mannerisms. I like to focus on people that fit the current environment and then “discard” them as potential threats. That’s my objective, to notice, evaluate, and discard people. While you could set a goal of cataloging everyone you meet with the intention of remembering all the details about them, it’s an unrealistic goal. There’s no way you can process that much information. Besides, it’s almost entirely irrelevant because 99.99% of the people you encounter won’t present a threat. The key is spotting that small percentage that might.

Let’s consider a somewhat extreme example. I live near the beach, so that’s an easy place to identify people rhythms. If I see a family of four wearing bathing suits and t-shirts and carrying a laundry basket of beach toys, the odds are pretty good that they fit into that environment. On the other hand, if a figure materializes from the dunes wearing a ninja costume and mask, waving nunchucks while playing the bagpipes, the signs point to an abnormality, so that’s a person I want to keep an eye on.

In the real world, you might notice someone wearing clothes inappropriate for the current environment, trying too hard to look like they’re doing whatever activity is expected for that location, fidgeting with their hands or feet, or looking around while quietly talking on a cell phone. You get the idea. Once you understand the rhythm of the areas you frequent, it becomes easier to spot people “out of rhythm.” One benefit to a world full of CCTV cameras is that it’s another way to spot suspicious behavior. If you see someone checking out all the corners in the ceiling, then maybe they’re trying to spot or avoid being caught on candid camera.

The other big benefit of using an “evaluate and discard” strategy is that it lets you live your life. Rather than going about your daily business in a constant state of paranoia, trying to watch and catalog every movement and mannerism of everyone around you, you can go about your day in a more natural and comfortable state of awareness. You’re paying attention to your surroundings and you're prepared to “zero in” if you spot something out of the daily rhythms, but you aren’t consumed by the activity.

Part of the challenge, for me anyway, is the comfortable yet slippery slope to mental zombie-land. While walking around it’s far too easy to zone out and “see” everything while seeing nothing. One tip that really helps to keep your brain engaged and helping your eyes to notice things is to read. Read it all. Signs, graffiti, bumper stickers, car manufacturer badges, signs, things in storefronts, and whatever other written word is among your daily travels.

Give it a try. I’ll bet you find you notice quite a few things you never saw before. It's not about the reading comprehension as much as it's about keeping your eyes moving and your brain engaged.

Here’s the bottom line. Unless you’re naturally gifted with Sherlock Holmes powers of observation, you might just need to be intentional about it. The more you find deliberate ways to focus on your environment, the more aware you’ll be subconsciously.