Consciousness and Competence in Training 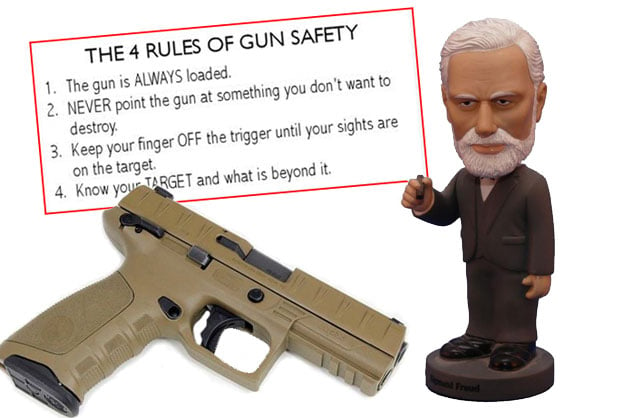 My first experience shooting a paper target with a pistol was both shocking and revealing. As a young man, I shot pistols with my friends who owned a Smith and Wesson Model 25. They all considered me to be the best shot, but we were shooting rocks, bottles, and cans - all normal practice targets in the 60s. I shot paper targets with rifles, but I considered this different, and it was only done to zero a scope or check different loads. On my first event of shooting paper with a pistol, a 25-yard pistol target was placed the proper 25 yards away. As I fired five rounds, I noted with satisfaction that there were no hits in the white. When we walked down to check my score. I found there were no hits in the black, either. I had grossly overestimated my capability. I was unconsciously incompetent before those five shots and consciously incompetent by the time the owner of that fine old revolver fired ten shots, all in the nine and ten rings.

Also See: How To Improve Your Handgun Accuracy In One Easy Step

As a shooter, there are four stages of competence. I just described the first two in the previous paragraph. Almost all shooters who don’t approach shooting seriously are in the first or second category. Men tend to be unconsciously incompetent, and women tend towards conscious incompetence. All things being equal, women are usually easier to train, because men have to cross over into the second stage to begin to improve. As I saw on the day of my awakening, men tend to see poor performance, and they assume it’s the equipment, hence the statement, “You might as well throw a .45 as to try to hit something with it”. I heard this a lot from the post-World War II generation.

Unconsciously incompetent shooters resist training because they believe they’re perfectly capable and want to hold onto their habits that don’t work. Most can’t accept that what they’ve believed all their lives isn’t the best way. They require demonstration that there’s a better way. Some require repeated demonstrations and almost downright humiliation to be convinced they really don’t know the best way. Obviously, they’re difficult to train, and until they move from this state of mind, they’ll never learn to shoot well.

Conscious incompetence is common with new shooters who have a fear or lack of understanding of firearms. This is where real progress in training begins. As an instructor, with the influx of so many new firearms owners, I see this more frequently. Consciously incompetent shooters are receptive to instruction from the first shot. They know they need help and willingly accept it. They have an interest in improving their skills and are on their way to learning to shoot well.

The next stage of the progression is conscious competence. With the guidance of a good instructor, the shooter acquires the ability to perform, but results require constant conscious mental reminders of proper technique. This is the checklist form of shooting where most people generally fall in love with shooting. They’ve learned what they need to do. They cross off a mental checklist as they fire a shot, and they get the reward of a good result. In any form of predictable shooting situation, this is a workable method for success. Less of the “checklist” mindset is required, but the shooter is still unable to perform other tasks and still shoot well.

The ultimate goal for shooting success, whether it’s rifle, pistol, or shotgun, defensive or competition, is unconscious competence. Unconscious competence allows the shooter to perform with accuracy and speed while focusing on other issues. Action stage matches like three gun and USPSA create problems for the shooter to solve mentally while requiring physical speed and accuracy. To be successful, the process of firing the gun properly has to be performed without thinking about items on the checklist; firing the shot is done as a conditioned response.

Unconscious competence in the form of a conditioned response should be the goal for safe gun handling too. In fact, it’s probably even more important because we handle guns more than we shoot them. Developing the conditioned response of checking a firearm before handling it will reduce your chance of an accidental or negligent discharge. Proper muzzle control as a conditioned response can be learned through awareness and repetition, and the same is true of keeping your finger off the trigger.

In hunting, that unconsciously competent, conditioned, response allows an effective shot under surprise conditions. In competition, it allows the shooter to perform while making decisions and dealing with distractions. In a defensive situation, it allows the defender to judge whether the situation truly is a deadly force event and be aware of other threats or possible bystanders while performing under pressure. While not everyone can achieve total unconscious competence, it’s the level all truly exceptional shooters achieve.