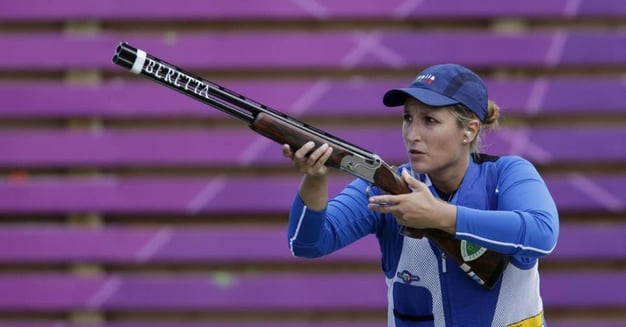 Also See: How To Fit Your Shotgun For More Accurate Shooting

Wingshooting is unlike most other forms of shooting because it requires the shooter to focus on a fast moving target. Because of the lag between the time the gun is fired and the shot charge arrives at the target, the shooter has to shoot at the point where the target will be when the shot charge arrives. This is further complicated by the reaction time of the shooter, which exaggerates the actual amount of lead allowed. As a result, effective wingshooting requires instinctive judgments of the amount of lead required and angle of movement of the gun. There’s no time for checking to see if you’re looking straight down the barrel.

Most other forms of shooting allow time for the shooter to mentally go through the actions required for an effective shot, but with wingshooting, there’s only a small window of time. Because of this, it’s imperative that aim adjustments requiring thought be kept to a minimum, meaning the way the shotgun fits the shooter is more important than any other kind of shooting.

I explained to my client that shotguns don’t have a rear sight like rifles and shotguns because there isn’t time to consciously align sights in wingshooting. Instead, the shooter’s head position on the stock constitutes the rear sight. When a shotgun is mounted with the shooter’s head positioned on the stock, so the eye is aligned with the rib and bead, the gun will shoot to the point of aim. If the head is too high, the gun will shoot high, too low and the shooter will shoot low.

At extremely high levels of skill and competition, guns are specifically fitted to the individual shooter, and this pays off when breaking one or two more shots out of a hundred means the difference between winning and simply participating. There have been volumes written about gun fit, but at the basic levels of shooting most hunters and casual shooters engage in, it’s quite possible to achieve reasonable gun fit without having a custom stock designed to the shooter’s requirements. While there’s no doubt that a precisely fitted gun will benefit any shooter, most people simply aren’t willing to spend a couple of thousand dollars for a perfect fit.

Before proper gun fit can be established, the shooter must have a consistent gun mount. The only way to do this is through repeatedly shouldering the gun until it comes to your shoulder smoothly and consistently. While this is often referred to as muscle memory, a better description might be to call it a conditioned response of your brain learning to control your muscles consistently to accomplish a task. When you drive a car and need to quickly apply the brakes, you don’t have to look or feel around for the brake pedal because you’ve repeated the process so many times your foot has learned exactly where the pedal. Your brain even knows instinctively how much pressure is required to stop the car smoothly in the distance you have. That same kind of subconscious control is required for a consistent gun mount.

To accomplish this, choose a spot on the wall or other target point. With the gun at the ready position, close your eyes and mount the gun with the intention of the bead on the end of the barrel being pointed exactly at the target. The butt of the gun should be in the pocket of your shoulder, not out on the shoulder joint or your arm. Open your eyes and observe the result. Repeat this process until you get a consistent result. It takes more than one session to properly condition your brain to control your muscles consistently, so multiple sessions are required for most beginning shooters. The more you do this, the faster your progress.

Anatomy of the mount

From the low ready position, the gun should come slightly forward to avoid snagging clothing, and as the stock meets the shooters face, it should be nestled into the shoulder pocket. Many new shooters find they’re looking over the top of the gun and need to learn to lift their shoulder somewhat to meet the gun as it comes into contact with their face. The gun should be pulled firmly into your shoulder with your face firmly in contact with the comb of the stock. Remember, head position on the stock is critical because shotguns don’t have rear sights. Where your head is on the stock replaces the alignment of a rear sight and allows you to see straight down the barrel, allowing the gun to shoot where you look.

What you should see

Once proper gun mount is accomplished, only then can you can assess the fit of the gun. For proper gun fit, the shooter should be looking straight down the barrel without having to adjust his head position every time the gun is mounted. Adjustments to a stock right or left are called cast adjustments. If you’re not looking straight down the barrel and have to adjust your head right or left, you might need to adjust your gun mount or install cast spacers.

Ideally, you should only be able to see a small amount of the rib, and you should be looking straight down it. If the gun has a mid-bead, the two beads should be stacked into a figure 8 shape. If you’re looking down on the top of the rib, the comb of the stock is too high. If you’re seeing the back of the receiver, the comb is too low. Most modern semi-autos have shims or adjustable cheek pieces that allow a reasonable amount of gun adjustment. Unless you have an extremely unusual face shape, you should be able to adjust your mount to compensate for right and left with most guns. Guns with fixed stocks have to be reshaped by a professional.

When you shop for a gun, it’s imperative to try this technique with the prospective gun before you buy it. If the gun doesn’t have a shim or cheekpiece system to adjust it to fit you, you’ll have to shell out a considerable amount of money to make the gun fit. There are other adjustments like length of pull and pitch that affect your shooting, but the height of the comb is by far the most important.

If your gun fits properly, you’ll be able to focus on the target because the gun will always shoot where you’re looking. You should see the barrel, rib, and bead, but only in periphery and as a reference. There’ll be no need to shift the gun or push your head further forward or back, and your shooting will improve because you can then focus on driving the gun to the target instead of wondering where the gun will shoot. Crushing clay targets is satisfying, and the ability to do so depends more on how well the gun fits you than your choice of gun, choke, or ammunition. You’ll never reach your potential until you shoot a gun that fits.