Five Ways To Do Concealed Carry with a Full Size Gun

A small gun like a Beretta Tomcat is easy to carry, but a large gun, like this 92FS is oh-so-nice to shoot!

Because I like big guns and I cannot lie. While liking big guns may sounds like a macho thing, it’s really the opposite. Two of my favorite big guns, the Beretta 92FS and the Px4 Storm, are the same caliber as plenty of smaller guns chambered in 9mm and .40 S&W respectively. They’re just larger. And that’s where the reverse macho element comes into play.

A larger gun is easier to shoot. You can get a good, solid grasp on it. It’s got a longer sight radius, so aiming is easier. The larger weight and size soak up felt recoil. When you add all that up, big guns shoot lighter and more comfortably than small guns. Heck, when I take a new shooter to the range, the first thing I steer them to, after some practice with a .22LR like the Neos, is the biggest gun they can properly hold - ideally chambered in 9mm. Why? Because I know it will be kinder and gentler to them. Less blast, less muzzle jump and less felt recoil.

As far as I’m concerned, there are lots of benefits to big guns, but only one drawback. That disadvantage is ease of concealment. If you carry a concealed gun on a daily basis, a large gun is more work. Not just in terms of weight, but the longer grip and barrel present more “bulk” that needs to be hidden away in your clothes. Depending on your lifestyle and daily activities, there are a number of ways to comfortably, and effectively, conceal a larger gun. Let’s consider a few. 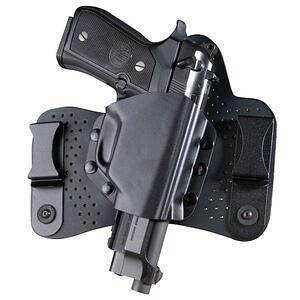 My personal favorite general purpose carry method for large guns is a hybrid-style inside-the-waistband holster. Beretta makes them for my 92FS and Px4 Storm. Here’s why they’re such a good solution for full size pistols:

While not my favorite for general purpose carry, off-body solutions have their place. Riding a bike. Jogging. Hiking. Going for a walk. Picnics. Basically, off body can be a great solution where your off body carry device is likely to stay on you the whole time you’re doing whatever it is you’re doing.

A few things fall into this category including concealed carry purses, fanny or belly packs and the new “sling” packs. For athletic activity, like riding, hiking or walking, I prefer the sling pack design. Usually a single strap backpack, these are designed to quickly rotate to the front of the body in such a way that a gun compartment is presented. Sling pack designs help you conceal a gun in plain sight while making it almost instantly accessible.

The only drawback to off body solutions is just that - they can be “off” body. If you’re engaged in activity where you won’t remove the carry pack for long periods of time, great. If you’re routine is such that you need to put the pack or bag down frequently, this is not a good solution. After all, you’re responsible for the security of your gun at all times.

No, I’m not talking getting into the Valentines’ Day spirit early. I’m talking about spandex undershirt and undershorts solutions. I’ve had good success with undershirt carry for my Beretta 92FS and Px4 Storm. They key is to find a shirt that has an elastic gun security strap mounted high - just under your arm. Not only is concealment outstanding, the high mount allows your arm to help retain the gun during physical activity. Some designs feature a pouch instead of an elastic strap. These are great for smaller guns, but not as effective for larger ones as the gun won’t fit entirely inside the pocket and allow it to close properly.

You might also check out concealment shorts. Think spandex athletic underwear with a gun pocket mounted in the four and eight o’clock positions. You get many of the advantages of an inside-the-waistband holster but with more wardrobe flexibility. You can tuck in a shirt or blouse with no telltale clips exposed.

Drawbacks? You won’t be able to access your gun as quickly as with other solutions as you have to grope inside your shirt first. As always, plenty of practice with your chosen method of carry is critical!

Don Johnson was onto something back in the Miami Vice days. A quality shoulder holster can be a good solution if you spend a lot of time at a desk or in vehicles - in other words, sitting. Of course, your daily attire needs to include a cover garment that’s open in the front, like a blazer or jacket. I find that the shoulder harness system with gun on one side and spare magazines on the other balances nicely. Carrying a full size gun and a couple of spare magazines is not a problem.

The biggest downside is muzzle discipline. Most shoulder holsters have the muzzle oriented behind you. And when you draw, you run the risk of muzzling people to your offhand side and front. Still, this is one of my favorite ways to carry a large, heavy pistol. Just practice your draw to muzzle the ground instead of bystanders.

Using a traditional outside-the-waistband holster with a large gun usually requires a cover garment akin to those black trench coats Neo and Trinity wore in The Matrix. Sometimes that’s an option, especially in colder climates where a jacket stays on most of the time. If you live in the outdoor sauna known as the Southeastern United States, big cover garments can cause heat stroke. One option to consider is a heavily-raked holster, such as a small-of-back model. But wait, aren’t small-of-back holsters kind of dangerous? Perhaps. If you get pushed or fall down, you really don’t want a big gun between the ground and your spine. That’s why I like to use a small-of-back type holster carried in the four-thirty or five o’clock position. You get the benefits of good concealment without the risk of hurting yourself. And the gun is a lot easier to reach than from a six o’clock position. Why a small of back design you ask? Because of the aggressive cant angle (heavily raked) design. The severe angle allows you to carry the gun further back towards the six o’clock position. The angle also means the barrel of a full size gun doesn’t extend as far down, hence less of a need for an extra-long cover garment.

These are just a few suggestions that have worked for me. Keep in mind holsters are a very personal thing. You have to balance your body type, daily routine and gun accessibility requirements to find the right answer for you.