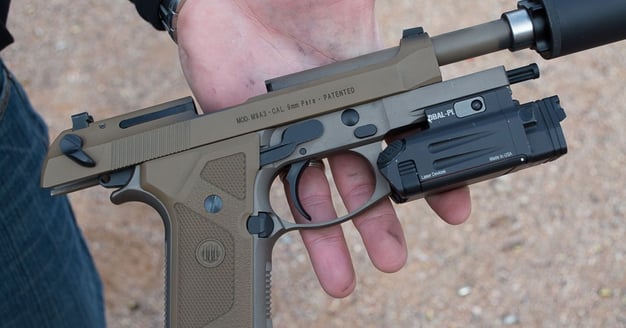 I visited a local gun shop this week and was glad to see that business was booming. I was happy for the shop owner, the people browsing and buying, and for the industry. But my brief moment of euphoria was rudely interrupted by three instances of sloppy gun handling - two by customers and one by an employee of the business. As an instructor, range safety officer, and former police firearms instructor, my instincts kicked in, and I wanted to grab the guns and point them in a safe direction before anyone got hurt. That was three instances of pointing a loaded gun at people within just a few moments.

Also see: How to Survive Your First Gun Store Visit

I’m sure you’re asking how in the heck loaded guns got into a gun shop, so let me clarify… All guns are loaded! That’s the mindset that you have to have when handling them. You can drop the magazine, lock the slide to the rear and manually and visually check the chamber to ensure there is no cartridge there, but you still have to treat an handgun, shotgun and rifle as if it were loaded and keep the muzzle pointed in a safe direction. That’s just the first rule of gun handling. Too many people have been shot by guns that "weren’t loaded" to take any chances.

The incident opened my eyes to a need - a basic need - for information about passing guns back and forth as often happens in gun stores and on the range. So, I wanted to take a few minutes of your time to cover how to professionally pass a handgun from one person to another in such an environment. The first rule has already been mentioned: Treat every gun as if it were loaded. It should always be kept pointed in a direction so that if it were to discharge, no people would be hurt and hopefully, only minimal property damage will occur. There are too many variables here to give specific guidelines for every situation unless you’re on a range. In that case, then the gun should always be pointed downrange. In a gun store or anywhere there are people around, just make sure that the muzzle doesn’t point at anyone or sweep over them at any time.

Okay, we have the first rule down. What’s next?

The second rule is that anytime you pick up a handgun (or any firearm) or have one handed your way, you must check it to ensure that it’s not loaded. For a semi-automatic handgun, this means dropping the magazine, locking the slide to the rear, and visually and physically verifying that there are no cartridges in the magazine well or the chamber. Typically, this will include sticking one’s little finger into the ejection port area and feeling the empty chamber. Once you’ve validated that the handgun is unloaded, you should check the magazine as well. If the handgun is a revolver, you’re going to go through the same routine with it. While keeping it pointed in a safe direction, press the cylinder release, open the cylinder, and visually verify that each chamber is empty. Then, and only then, can you begin to examine the handgun, handle it, and or point it to see how it feels to you. Yes, if you’re going to buy a handgun, that’s one of the most important criteria that have to be met; it has to fit your hand comfortably, and you must also be able to operate all of the gun’s controls without having to shift it excessively in your hand.

Now that you have that part down, let’s move on to how a professional passes a handgun to another person.

Once you’ve finished handling the gun and wish to give it to someone else, you must again perform the above steps to validate that it is empty. Preferably, you’ll do that under their supervision, so they too can see that it is unloaded. If it is a semi-automatic pistol, the magazine should be out. If it is a revolver, the cylinder should be open. The procedure is slightly more complicated for single action pistols or handguns with special configurations, but the goal is always to ensure that the gun is unloaded before passing it to anyone else. If you handle handguns other than double-action revolvers or most semi-automatic pistols, ask for the proper procedure before handling them.

After validating that the gun is unloaded, it is time to hand it to the other person. To do this, you should grasp the gun in such a way that you present the grip to the other person rather than the barrel. For a semi-automatic pistol, this typically means grasping the slide/barrel assembly and turning it so that the muzzle faces your direction (though not at you). The other person can then grasp the grips firmly and take control of it. For double-action revolvers, you may either grasp the barrel, as with semi-auto’s, or you can hook your fingers through the open cylinder area, grasp the top strap, and turn the grips toward the other person.

The person receiving the gun should go through the same procedures that you did when you received it. They might have just watched you check, but they should always do the same thing for themselves. It seems a bit redundant, but it’s a heck of a lot better than risking the alternative. It’s easy to get complacent. Don’t let it happen to you or anyone around you. As most instructors tell their students, there are only two kinds of shooters - the ones that have had an accidental discharge, and those who will. Handle firearms long enough, and it will happen!

If you follow these simple procedures, the staff in any gun shop will know automatically that you are serious and that you are a professional when it comes to handling guns. They will usually smile in appreciation.