How to Hit the Bird When You're Cross-Eye Dominant 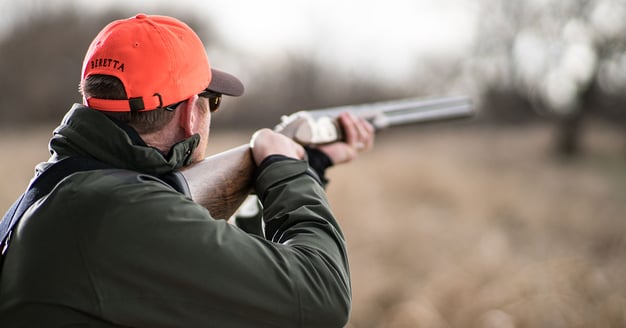 We all have our excuses about why we miss flying birds when we’re shooting our shotguns, but cross-eye dominance doesn’t have to be one of them.

As a child, and even into young adulthood, I had a strong right-eye, which matched my right-handedness. Unbeknownst to me, my eyes changed as I aged. Now my left eye will take over as the strong one if the right one is fatigued. The issue doesn’t bother me at all as I look through the scope atop my Sako Hunter rifle. When I need both eyes open, to point at and hit a bird is when I’ve encountered difficulty.

See also: Learning to Shoot with Your Weak Hand (And check eye dominance)

I discussed the issue with my optometrist and with other shooting friends. What I learned is that this isn’t an unusual issue. While my eyes compensate for one another, and one takes over on occasion, other people’s dominance may switch entirely - or be switched from the start. What I’ve learned is that there is more than one way to hit a bird, and you don’t have to let your cross-eye dominance be a detriment.

After you’ve figured out which eye is the one with the strength and focus, you need to do just that. Develop your strength, in working on your shooting form, and learn to focus. Learn to see your target.

Learn to shoot with the other hand

I’ve been shooting right handed since the age of five. Let me tell you: after a few decades of doing so, it’s a challenge to swing and shoot a shotgun with your other hand. However, it’s not impossible. With a lot of practice using your safe, unloaded shotgun, you’ll be ready to head to the range and try a few live-fire rounds. Eventually, you’ll catch up to your target.

I gave this option a try and found success. You can do this too. It’s like driving a car. At first, you’ll have to talk yourself through each step, “grip hand, finger out of the trigger, forehand point, cheek weld, neck out, shoulder mount, safety, swing, shoot.” After a lot of practice, the mechanics will become second-nature, and you’ll be more focused on your target than telling your body what to do.

As I mentioned, my eye dominance changes. What I’ve opted to do is stay with my good-old strong hand swing. Let me tell you how I hit my targets, even when the other eye tries to take over.

Close or blur an eye

One thing I’ve been told is, “You’ll have to close an eye, so your vision is properly aligned with the barrel.” If you’ve ever shot with an eye closed, you know that it’s pretty difficult. Our brains need the peripheral vision to calculate angle, distance, and speed. With an eye closed, it’s hard to translate how quickly a bird is coming. While it can be done, it’s a limiting scenario.

A way to effectively block out one eye, so it doesn’t take over, is to blur out your shooting glasses. Do this by applying opaque tape, or smudging chapstick, to the lens of your glasses just in front of the pupil of the eye that’s not aligned with the barrel. Even though that side will be blurry, you’ll still be able to see through that lens and get most of the benefits of peripheral vision.

This method works, but I’ve learned a better way.

Close an eye - but not yet!

A friend taught me the easiest way to have both eyes open, swing, and hit my targets when my cross-dominant eye takes over. As I lay in the blind and the low-flyers come our way, I keep both eyes open. Just when my hunting partner, who’s been designated the caller, yells “Shoot ‘em!” I mount the gun. Remember, both eyes are open. I focus, seeing each detail in the feathers of the bird I choose. Just as I prepare to pull the trigger, I close the cross-side eye, simultaneously pulling the trigger, and “BAM!” a goose crumples and plummets from the sky.

It may sound complicated at first, but with practice, the “strong-hand, both eyes open, close one at the last moment” method is safe to learn and very productive.