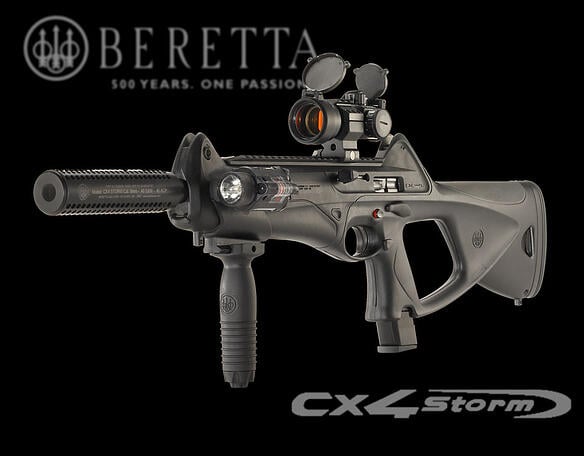 Also see: Shooting The Beretta 1301 Tactical In The Dark (3 Gun)

Though the traditional police shotgun is one of the most versatile weapons available, its usefulness is determined based on matching the cartridge loaded to the circumstances at hand. Since the standard police load was buckshot, one always had to take that into consideration when responding to any situation. It was my feeling (and still is today) that I would be better off with a short rifle where I could more readily control shot placement. So when offered the opportunity to evaluate the Cx4, I jumped at the chance.

This is not the first pistol-caliber carbine I’ve evaluated. When my department mandated that Glock would be the required sidearm, I looked into another one that used the Glock magazines. That was an Olympic Arms K40GL - an AR type rifle that had a special lower made to use the Glock factory magazines. It was a great idea, but it failed in one of my most important categories - reliability. I could possibly have tinkered with it and made it operate reliably, but I didn’t have the time nor the patience and sold it to a friend shortly after getting it. It’s my understanding that Wolf Manufacturing offers another take on this Glock carbine concept, but I can’t vouch for it, since I’ve not tried it. So my first experience with a pistol caliber carbine was not good. Still, I have always been a huge Beretta fan, so I looked forward to seeing their take on the concept.

I notified my FFL dealer that I was having the Cx4 sent and asked him to keep his eye out for it. I received a call the next day saying that it had arrived. As he opened the box, he commented that he was anxious since he’d never seen one before. I had to laugh as he opened up the familiar blue case and exclaimed, “Wow, I didn’t know Beretta made weapons for Klingons!” He pulled it from the case and admired the graceful lines. I had always liked the looks of the Cx4, but never thought of it in that way. Still, I can picture it in the hands of Lt. Worf. I can see him explaining how it uses the same ammo and magazines as his handgun and that even Mr. Spock would agree that it was a logical choice.

But enough of the Trekkie stuff. Let’s get on to my report…

Stardate 92166.95: I arrived at the range bright and early to evaluate the Cx4 carbine from Beretta. (Sorry, couldn’t resist!)

I took the Cx4 to the range in late July and tested it using a number of ammo types ranging from factory self-defense loads to factory practice loads and even a few hand loads of different types. My initial impression was that this was a soft-shooting and very accurate little rifle. With no sight changes whatsoever, I was able to engage targets at about 30 yards without fail. Curious, I flipped the sight to the smaller aperture designed for longer distances and attempted a few 100 yard shots. I found it easy to hit an 8” target shooting offhand (read old milk jug.) I was impressed. I passed it over to a friend of mine and he too found it easy to hit at different ranges. What’s more, it was just a fun little rifle to shoot.

One notable thing about the Cx4 is that standard magazine change drills were different when using the carbine. Those used to the American style of pistol reloading, where your magazine falls free and another is slammed into place with the weak hand will find it a little odd. Though I have big hands, I was unable to easily reach the magazine release button with my shooting hand due to the stock design preventing the typical hand rotation on the grip. If I changed to a more European style of magazine change where the mag button is pressed with the weak hand and the same hand is used to catch the falling magazine, I found that I had no issues whatsoever. In fact, I started getting used to the drill by modifying the standard tactical reload procedure that is frequently taught to police. After about 30 minutes, I found that it came natural to me. This is not a criticism of the Cx4. It’s just something to note about it and practice.

Being the utilitarian that I am, I immediately started thinking about the different roles that it might fulfill. My initial thoughts about using it as a patrol rifle now seemed to be very reasonable. It would make a fine addition to the arsenal for any suburban police department. I thought back to my time as a campus police officer and imagined using it to clear buildings in an active shooter scenario. Again, it would fit the role quite well. Then I thought about how it would fit in the average home as a self-defense gun. This too seemed to be a perfect match for its capabilities. It’s this last role that I decided to evaluate in a little more detail.

Some of the characteristics needed in a home defense weapon are that it should be reliable, accurate, reliably digest a variety ammunition types and be easy to use. I’d already seen that I could use it easily and that my buddy Tom could, but I wanted more information. A week later, my youngest daughter and I met a friend at a local indoor range. Neither of these ladies was used to shooting rifles, so I wanted to see how well they could shoot with it. I have to tell you that both of them commented that they didn’t care for the looks of the Cx4 - something that I found surprising. Even when they held it and shouldered it, they still were standoffish.

Things didn’t look like they were going very well, but I persisted. With a target at 15 yards, both ladies were able to accurately place shots in the center of a standard bullseye target. I wasn’t really surprised since I’d already learned that it was easy to shoot accurately. The surprise came when they commented on the gun after shooting it. Both changed their minds and said that they "really liked it." I was curious about the change, so I asked them why they changed their mind. Neither one gave me an answer. They just liked; that was all the reply that I got. OK. Who am I to argue with a woman’s opinion?

I was still curious about how new shooters would react to the Cx4, so I met a couple of other friends at the range a week later and repeated the test. Interestingly, my male friend shot it but wasn’t too keen on it. He shot well with it but said that he just wasn’t a rifle kind of guy. He preferred to stick to his handgun. OK. I can live with that. When my other friend picked up the Cx4, she fumbled with it at first. I coached her for a moment, then she started shooting. Her reaction was the same as the previous two ladies - she liked it and shot very well with it. I have to note here that this young lady had never picked up a gun in her life before coming to the range that day. I add that because it goes to my initial thoughts about how easy carbines are to accurately use - especially for new shooters or ones that don’t get to practice a lot. If we think of the typical home use, that’s what we’re going to find; it’s likely going to be a novice shooter or one who doesn’t get much practice time. The fact that all four of these shooters could pick it up and accurately fire it demonstrated that it would be great in this role.

I’ve since taken the Cx4 to the range a number of times, and I’ve had a lot of fun with it. I’ve had so much fun with it that I think I’m going to have to add one to my small collection. My usual criteria for evaluating whether I add a new gun has been modified a little. I’ve always decided based upon the intended role the gun would fill. The Cx4 has had me add a new category to the list - fun to shoot.

If you’ve read this far, you’ve probably asked where all of the specifications are. Well, I skipped them. This is not a new firearm, so if you’re looking for the length, weight, trigger pull, etc., all of the specs are available right here at Beretta USA. My purpose is not to repeat what others have said already. Instead, I wanted to offer some thoughts on how the many different roles that this fun little carbine can fill. You might have noted that I also didn’t mention reliability. Well…I didn’t need to. Just like every Beretta I’ve ever owned, the thought never came up. That’s because there were never any issues. Pull the trigger and the gun fires. That’s exactly what I expect with a Beretta, and they have never let me down.

Now the only question to ponder is if I’m going to get to keep the Cx4 or if my daughter is going to abscond with it and claim it as her own.