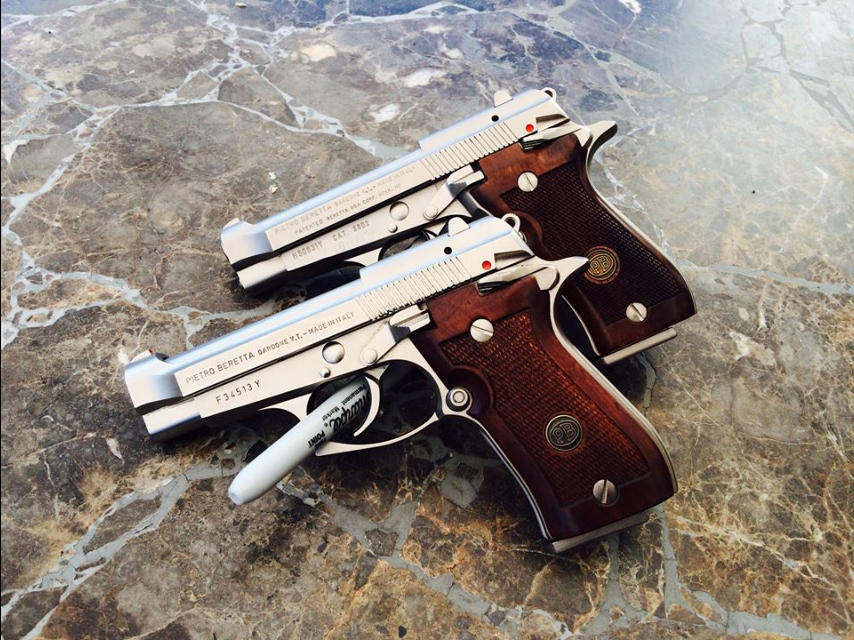 Every time summer rolls around, I find myself justifying the .380 as a practical concealed carry round. It is a story I tell myself, really. When the temperature hits triple digits, I tend to shed layers of clothing—layers that I rely on to conceal my preferred double-stack 9mm.

What do I have against the .380? Nothing really. In my years in the firearm industry, I’ve plugged away at numerous gel blocks. I’ve studied the terminal ballistics of the 9mm Kurz, and I like what I see.

I’m especially fond of the performance of these little buggers from Lehigh Defense. They have no lead in them, so I don’t worry about any exposure. They expand well, too.

It isn’t the terminal ballistics, though, that bothers me. It is the other end of that trajectory. The beginning. In order to expand on the down-range side, the .380 has to pick up some speed, quickly, and that makes an impression on the hand of the person pulling the trigger.

A bit of perspective on the .380’s origins

If you expected this to be one of those hit pieces on the .380, you’re mistaken. I’m not going to grouse about how the 9mm is more effective than the .380, or how a .45 ACP will blah, blah blah. Yes—duly noted.

I’m of the considered opinion that a well-placed .380 can be just as persuasive as a well placed .45. I’m here to talk about the delivery system.

Consider the origins of the .380 ACP. Back before World War II, there were numerous gun makers milling steel .380s that filled the hand. These are some of the easiest defensive pistols to shoot. The Colt 1908. The Walther PP, the Beretta 1934.

The guns were built to be concealed by men, mostly. Those men wore coats, even when the temperature hit triple digits.

These guns were heavier, which helped with recoil absorption. Their recoil impulse mitigated muzzle-flip, which allowed for them to be more easily controlled for a follow-up shot.

The same trend existed in revolvers. There were all sorts of smaller calibers, but the .38 gave way to the .38 Special, and that seemed good enough.

That didn’t stop the whiz-kids from refining the .45 ACP, and .38 Super, and the 9mm, etc. But the .380 and the .38 were comfortably seated on their respective concealed-carry thrones.

So what killed the big .380? As Mr. McGuire says to Benjamin in the 1967 film The Graduate: Plastics.

Mr. McGuire: I want to say one word to you. Just one word.

Mr. McGuire: Are you listening?

Benjamin: Yes, I am.

Benjamin: Exactly how do you mean?

Mr. McGuire: There's a great future in plastics. Think about it. Will you think about it?

Benjamin didn’t think about it. Every firearms manufacturer did, though. Plastics made compact handguns lighter. While I say plastics, I should really also include advances in aluminum and steel, as well as injection molding and CNC production methods.

To be utterly reductive, the polymer revolution made ever-smaller concealed carry guns possible. Fashions were changing. Men weren’t wearing suits so much, so the micro-.380s were ideal.

Look at the Beretta Cheetah. That gun, in all its glory, was behind its time. It stands as a refinement of earlier guns, including the Beretta 1934, yet it came just as polymer was shaking things up.

The Cheetah is easy to hold, thanks to its double-stack grip. The gun offers enough real estate for superior control. The longer barrel allows for a more functional sight-radius and squeezes a bit more out of the expanding gases.

If I sound nostalgic, it is because I am. I spent last weekend at the range. In preparation for cooler temperatures, I have been working out my 9mm. As is my habit, I put a few boxes of .380 through a wee-little-mouse-gun, too, before I switch it out.

The ultra-small .380s, like the Pico, have their place. They are ridiculously easy to conceal. Thanks to advances in .380 ammunition, they are just as effective as their ancestors. But they're not as fun to shoot as the larger guns like the Cheetah.

Guns with exquisite ergonomics, like the PX4, are easy on the hand. I have run 500+ rounds in a single afternoon through a PX4 and not come away with hand cramps or pain. I’m also much faster with a compact double-stack. I’m more accurate, too. In the end, I’d say that I’m much more confident.

Still, I practice with my .380 carry pistol. I find the benefits of concealment greatly outweigh the discomfort of range time, so I practice.

After all, concealed carry is about how you feel. I’m not talking about the emotional snowflake kind of feelings. I’m talking about walking away from a fight. In a defensive shooting, when the adrenaline is ripping, you won’t feel the recoil in the web of your hand.