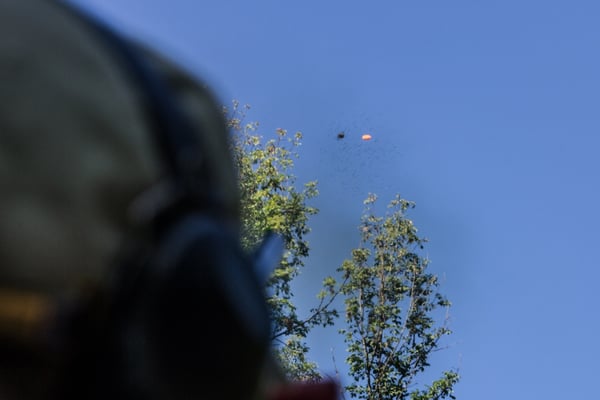 Wingshooting skills would be so easy to learn if we were shooting laser guns. You know, the ones aliens carried in the “B” movies to project a continuous beam of disintegration at earthlings who refused to take them to their leader. With these mythical shotguns, we would just watch the beam and easily adjust for lead on any target no matter how evasive its maneuvers.

If you’ve ever set foot on a shotgun range, you know it doesn’t work that way. Learning to consistently center a shot pattern you can’t see on a moving target is to master physics, muscle memory … and a good bit of art. It takes time.

By incorporating Winchester AA TrAAcker shotshells in their training toolbox, new shooters move a bit closer to this sci-fi fantasy. With some practice, TrAAckers allow the shooter (and coach) to more easily see the path of the shot pattern to the target.

How Do Visible Shots Benefit Training?

While an instructor analyzing a student’s shots will be able to see the tracer effect immediately, working alone it will take the shooter about 50 rounds to train his or her eyes to see the TrAAcker in flight. This skill creates an additional benefit for the shooter.

One of the most common causes of missing – one that haunts both novice and experienced shooters -- is focusing on the bead(s) rather than downrange to pick up the target. In severe cases, the shooter’s focus shifts back and forth several times during a shot.

To see the TrAAcker wad in flight, the shooter’s vision must be focused down range. The subconscious thought of “looking for the wad” forces focus down range thereby instilling good habits over bad. This can also help an experienced shooter halt a slump caused by looking at the bead(s).

Once a shooter creates the muscle memory it takes to break targets, and gains enough experience to understand what he/she is seeing in various presentations, wingshooting becomes a 95 percent mental game. All types of athletes from race car drivers to downhill skiers to golfers train in mental visualization – that is "seeing" desired outcomes before they happen. This is a crucial skill for top shotgunners; just ask the phenoms on the USA Shooting Team who shoot at the highest level. They “see” every target break as they prepare for the shot.

Once a shooter is secure in the ability to see TrAAckers in flight, it’s a beneficial drill to mix them with regular target loads. Instruct the shooter to load without identifying which shell they are putting into the gun. Shooters incorporating proper visualization will likely believe they see the TrAAcker on every shot whether it’s there or not. That’s a strong mental game and tough to beat!

How Do They Work? 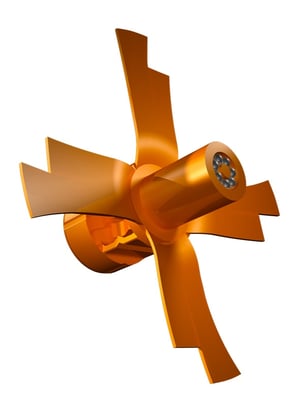 Winchester achieved the first requirement by building a flexible center post into the base of the wad. It’s, sort of, a shot cup within a shot cup. On setback as the shell is fired, this cup grabs and holds about 1/8 of an ounce of shot. This weights the wad, creating inertia to keep it with the shot pattern.

To keep the wad flying straight, the petals are much longer than those in standard wads. Even more important are their helical shape and the notches at the top of each petal. These create spin allowing the wad to fly on a line true with the pattern.

For Which Shotgun Games?

The TrAAcker’s sweet spot for trackability is 35-45 yards, which makes it a natural training aid for American trap shooters. The specs for American trap targets are to launch at 47 mph and fly 50 yards before hitting the ground. This makes the peak of the flight arc occur 25 yards beyond the front of the trap house. In a standard singles event, the trap is 16 yards in front of the shooter. If the target is broken at the optimal point - the peak of its arc - the distance from muzzle to the bird is 40 yards.

Winchester AA TrAAckers are also valuable training aids on the sporting clays course and on the skeet field. It may take the shooter additional visual training to learn to see the wads at closer ranges and against varied backgrounds. However, with a coach at his or her side, there will be no questions about where the pattern is shooting in relation to the target.

Are They Worth It?

Experienced shotgunning instructors learn to see shot strings for their students, especially when lighting conditions are right. However, this is a learned skill that’s not developed quickly. TrAAckers nearly eliminate that learning curve and even allow the practiced eye to “see” the shot string without a coach. This can be a big plus in advancing skills quickly. And in today’s world, creating fast success is important to keeping new shooters interested.

After you develop the skill to see the TrAAcker, I wouldn’t recommend shooting them exclusively. It’s expensive (they generally run a couple to a few dollars more a box than regular target loads), and the ultimate goal is to break targets consistently with standard loads. Yet, there is no other readily available or safe shotgun tracer technology. Winchester AA TrAAckers can be an excellent tool to learn basics more quickly and develop a strong mental game for competition.