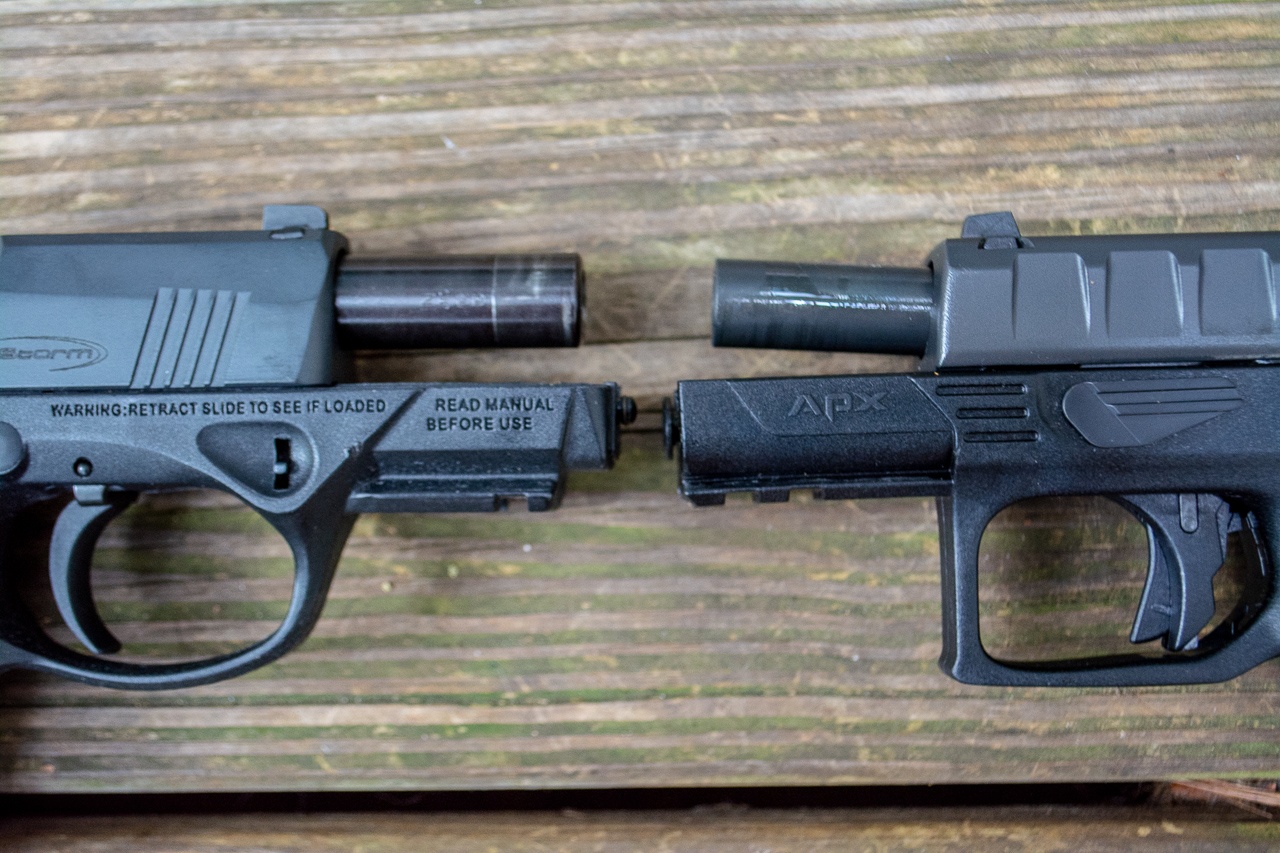 By very definition, semi-automatic pistols all have some basic features and functions in common. What makes them "semi-automatic" is the recoil system that performs a carefully orchestrated process of:

It sounds simple, but like most things that seem straightforward, there’s a catch. When a cartridge ignites, a whole lot of commotion happens in milliseconds. That conflagration creates a rapidly expanding cloud of highly pressurized hot gas. Pressure levels are astronomical, at least compared to everyday pressurized items like car and bike tires. Depending on the caliber, a handgun cartridge generates between 17,000 and 35,000 pounds per square inch of pressure in a fraction of an instant. That’s some seriously high-speed action. In fact, it all happens too fast for those semi-automatic recoil steps to happen reliably and safely.

If the pistol design allows the slide to fling back immediately on ignition, all that pressure hasn’t dissipated yet, so opening the chamber is a supremely bad idea. So, clever firearms designers have developed ingenious ways to “lock” the barrel and slide together as for just a bit as the recoil action begins. That allows the pressure to escape through the fiery end, while the chamber, as defined by the barrel and breech face of the slide (locked together), chills out a bit and begins its journey backward. Let’s state that differently for clarification. Upon ignition, the barrel and slide remain tightly locked together to contain pressure safely while both move towards the rear as a single unit. When pressure levels drop, they can safely disconnect.

In fact, the disconnection must happen or else there would be no way to eject the spent cartridge case and reload a new one. The mechanism by which barrel and slide lock and unlock are the topic of today’s discussion about rotary recoil systems like on the Beretta PX4 Compact and Full-Size models.

The most common recoil system in the pistol world is some form of the short-recoil tilting barrel system. The barrel locks to the slide by jamming into the ejection port cutout on the top of the slide. To unlock, the barrel must tilt, thereby lowering the breech end of the barrel and “unjamming” it from the rearward ejection port edge of the slide. So, when a shot is fired, barrel and slide move backward together, locked in position, until lugs on the bottom of the barrel catch lugs in the frame of the pistol. Once caught, those lugs “pull” the rear of the barrel down, thereby unlocking the barrel from the slide. With the barrel disconnected, the slide continues traveling back on its own and subsequently pulls the spent cartridge case out. When you field strip a short-recoil tilting barrel system pistol and lock the slide to the rear, you’ll notice that the muzzle end of the barrel points slightly upward. That’s because the rear barrel lugs have been caught by the frame locking block and pulled downward. 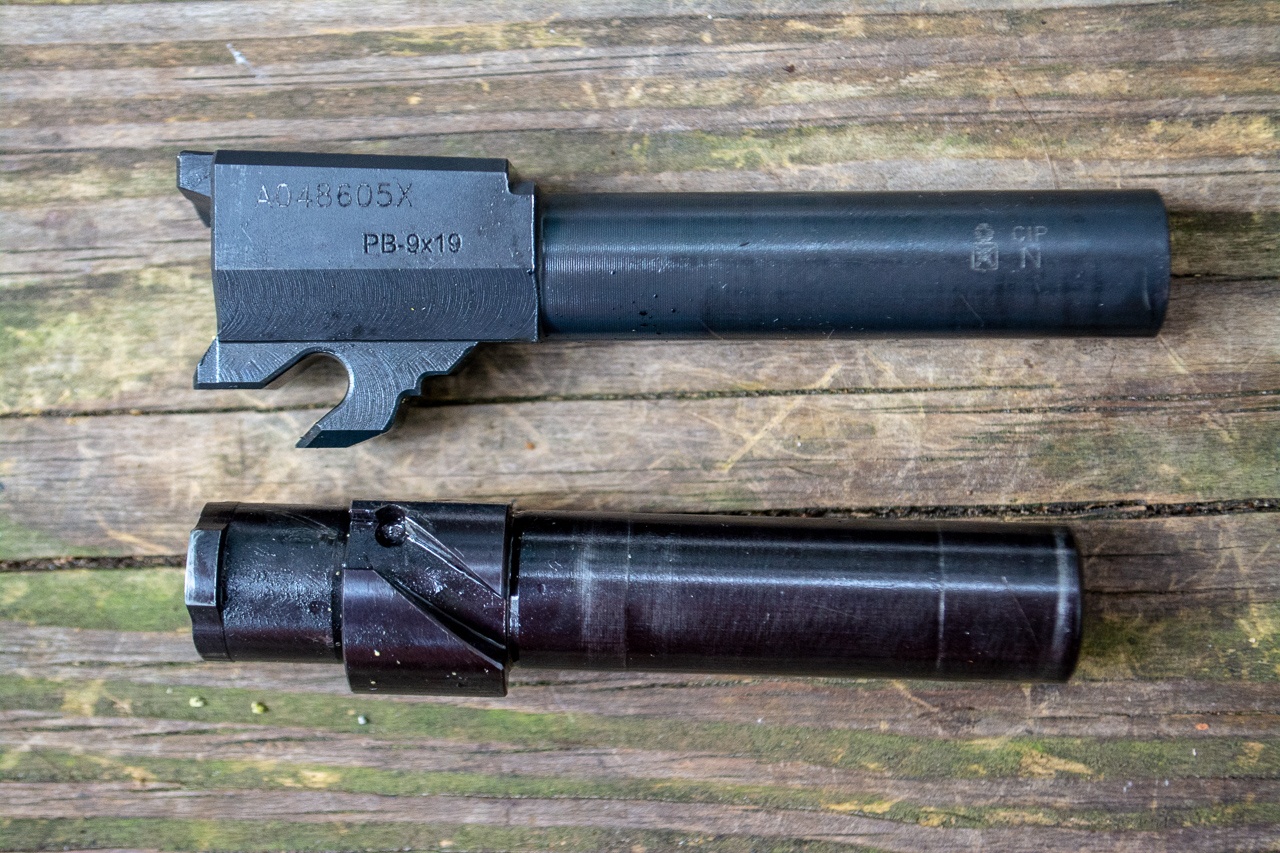 The rotary system takes a completely different approach. Because physics doesn’t change, the barrel and slide still have to remain locked together for a hot second until the pressure drops to tolerable levels. What’s different is how the slide and barrel lock and unlock from each other. With a rotary system, a diagonal groove in the bottom of the barrel rides on a lug on the locking block in the frame. As the barrel moves, its diagonal monorail track forces it to turn in place rather than tilt. As the barrel rotates, lugs on either slide that were previously locked into the slide rotate to an unlocked position, allowing the slide to continue on its journey without the barrel attached. You can make a loose analogy to a rifle bolt – those also rotate into and out of position to lock and unlock from the barrel.

The really nifty thing about the design is that the spinning bullet actually helps this process along. The rifling pattern is cut with a right-hand twist, so as the bullet travels down the barrel, it tends to torque the barrel clockwise from the shooter’s perspective. That clockwise rotation is not coincidentally the same direction of turn required to unlock the barrel from the slide.

With either system, all of this happens fast with minimal travel. In round numbers, the slide and barrel only remain locked together for about an eighth of an inch of rearward travel.

There are several benefits to the rotary recoil system.

With a short-recoil tilting barrel recoil system, all of the barrel movement is directed to the rear - towards you the shooter. You’ll feel that as part of the recoil sensation. In a rotary system, the barrel still moves backward, but part of its energy is dissipated radially rather than straight back. The forces are still there, just moving in different directions. The idea is that by spreading the recoil direction love, you feel less "kick", and have more control over the gun. In theory, the shooter will feel some rotational torque. I can't, but your mileage may vary.

When a barrel has to tilt, the hole in the front of the slide has to be large enough to allow for the tilt angle. In other words, the hole can’t be as precisely fit to the exterior diameter of the barrel. In a rotary system, there is no tilt. The barrel simply rotates in place. As a result, the hole in the slide can be smaller. That results in a tighter and more consistent fit between slide and barrel, and a better fit means better accuracy.

The PX4’s rotary recoil system locks slide to barrel in two places: at the front of the ejection port and two internal points inside of the slide. Better, more consistent, and tighter lock-up all contribute to improved accuracy and reliability.

In a tilting system, the chamber is, by definition, lower in the frame as a new cartridge gets loaded from the magazine. That’s because the barrel is tilted downward. This slight vertical offset means that the bore can’t be as low to the hand as there has to be room for the barrel to move back up into firing position. With the rotary system, the magazine can be almost directly behind the chamber. Since the chamber doesn’t move vertically, all of it can be lower relative to the shooter’s hand.

So, there you have it. The simplified version of what a rotary recoil action is and why it’s used.