Attitudes, Guns and the Importance of De-escalation 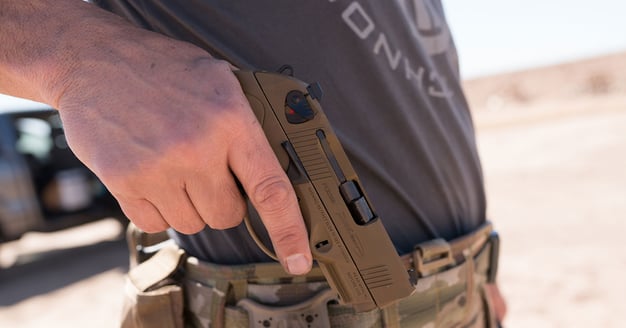 What do police officers' attitudes have to do with you? The nature of police work requires a careful balance between proactive action and de-escalation procedures. As an armed civilian, your mission if very different and with few exceptions, a "de-escalation" mentality will generally serve you well. Read on to learn why I take a different approach to confrontations when carrying a gun.

One of the most common questions I receive when people find out that I was a police officer is why police have to be such jerks all of the time (yes, I cleaned that up). I’m usually hit with a barrage of comments about police having attitudes because they can get away with it or that they feel some sense of cockiness because they carry a gun. Let’s be honest: there is some truth to both of these statements. I’ve worked with a number of cops that would grow a few inches if you gave them Viagra. (Warning: Don’t use that description when talking to or about your boss - just saying it might not be good for your career.) I’ve also worked with some of the kindest, most modest and humble people I’ve ever known. So what’s the key? What makes some great and others like talking to the South end of a North-bound mule?

There’s a lot that goes into the attitudes of police officers. It’s a topic that could provide volumes to explain. But I want to focus on one particular aspect - that police officers have attitudes because they carry guns. Let’s be honest; police work attracts a lot of Type A personalities. These are the guys looking for adventure. They are very competitive and love the chance to show that they are better than you at something - heck, at anything you choose.

I recall being a backup officer at a high-risk traffic stop early in my career where the drunk driver told the primary officer that he was going to kick his behind. The officer’s response? A broad grin covered his face. Some might argue that this was part of a psychological strategy to throw the suspect off-guard, and it did have that effect, which made it easier for me to de-escalate the situation and bring it to a successful conclusion. But this officer actually approached me afterward and complained, because he intended to show that *expletive* a few things. He wanted the fight and was disturbed that I prevented it.

You see, it didn’t matter to this officer that he had a handgun in his holster. It had nothing to do with the gun. He was just aggressive and wasn’t going to back down from a challenge. He would have been the same with or without the pistol on his side. There’s little doubt that he would have prevailed since he was a big, strong, and tough guy. He’s the one I would want backing me up if I was in a fight, and he did just that did many times.

At the time, I was a young, skinny officer who still lacked confidence. My approach was completely different, and it was based on the fact that I carried a gun. Look, I’ve been in some fights and have had the injuries to prove it. That’s ok. But when you’re a cop carrying a gun, it’s not ok. In fact, it often turns deadly. While having a gun can be a great advantage in some instances, it can be a burden to consider in others.

If you're an armed citizen, it's not your mission or duty to be proactive in crime prevention. It's also not your responsibility to win conflicts. Your responsibility is to protect yourself and your family, and the best way to do that is to avoid conflicts altogether. That's a critical distinction. As shown by this next example, the fact that you are carrying a gun can make a simple physical conflict potentially lethal.

I had a fellow officer who was in a struggle with a suspect who wrestled the gun from his holster. In this case, it was a revolver. The suspect was on top of the officer and had the pistol pointed at his head as they fought for control. He explained in graphic detail how he gripped the cylinder so tight to prevent it’s turning because he knew that it had to turn to fire. When he finally felt the cylinder slipping, he stuck his finger between the frame and the hammer. They continued to fight, and the suspect did end up firing a shot. Luckily, my friend was able to push the barrel to one side at the last second, so that he only suffered burns and a loss of hearing for a while. This story had a good ending since backup officers arrived right after that shot and the suspect went to prison.

It’s a double-edged sword. The handgun is critical for officer safety but also poses a threat that has to be kept in mind. I don’t know the current number, but it used to be true that about ten percent of officers shot were shot with their own guns. That was something that I have always been keenly aware of when faced with situations like the traffic stop mentioned above. In my case, the gun was one factor that pushed me to de-escalate the situation rather than fight with a suspect. It’s something I’ve repeatedly done through my police career. The same mentality is almost always your best approach as a concealed carrier too. The fact that you have a gun should make you far less inclined to enter a conflict of any kind, much less escalate one.

The bottom line is that whether you’re a police officer or a civilian carrying a firearm, you must be aware of the risks involved. Escalation of conflict to "potentially lethal" is just one of them. Carrying a gun doesn’t make you Superman, and it should temper your actions rather than inflame them. Keep in mind that there may also be some legal ramifications based on how you react as well.

My experience is that carrying a handgun has given me confidence in certain situations, but it has also caused me to be very circumspect in all situations.

Keep on learning all you can, and…..Carry On!