Quail Hunting and a Visit to the Dream Ranch 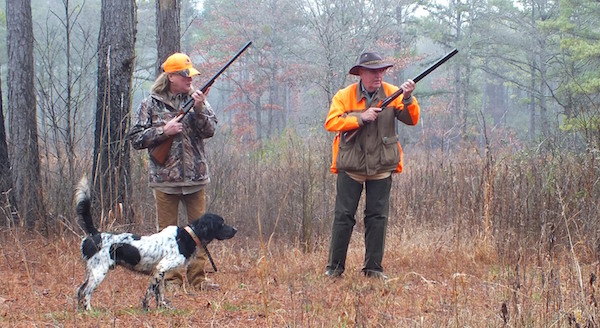 When my wife, Cherie, and I began making plans for our 2015 cross-country road trip to the Shooting, Hunting and Outdoor Trade Show (SHOT), we decided to sample some of the finest hunting locations in the country. The idea was to alternate a travel day with a hunting or shooting day. We figured the ideal travel stretch for this would be about an eight-hour drive. 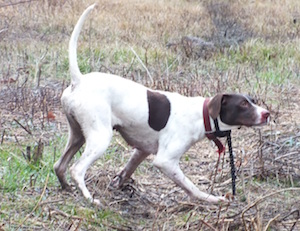 One of our favorite states is in the sweet gem of the south, Alabama. In Alabama, you'll find a spot that's earned the title of “Gem of Hunting Preserves in Alabama.” That would be the Dream Ranch. Located outside Guntersville in Alabama hill country, the Dream Ranch has been providing trips of a lifetime, since 2004. With 2,500 acres of hills and creek bottoms, the Dream Ranch offers trophy deer hunts, waterfowl hunts, fishing trips and the pursuit we chose, classic Southern quail hunting.

Dream Ranch’s lodge may well be the reason for the name. It’s huge, with accommodations for over two dozen guests, and is a wonder of polished wood and stone architecture. The primary social spot is a big central room with overstuffed couches and chairs and a large fireplace. The ceiling is supported by a grand pine post. Rooms are well appointed, beds are soft, and the bathrooms are everything one could want. Outside the decks run all the way around the building offering spectacular views of the surrounding area including Lake Guntersville. From the lower level deck, shooters can enjoy a round of wobble trap to warm up for the hunt with the targets launching from under their feet.

The deer hunting at the Dream Ranch is nothing short of phenomenal, with the best buck of this season scoring an amazing score of over 300 points. But in a land where quail is king, Dream Ranch is known as the place to quail hunt. Three elements make a great Southern quail hunt, terrain, dogs, and, of course, birds. Dream Ranch has a lot of bottom land, with some planted in rows and some fallow. The area we hunted was interspersed with big pines and oaks. It was more like the areas I hunted as a young man when we had quail on the family farms where I grew up. 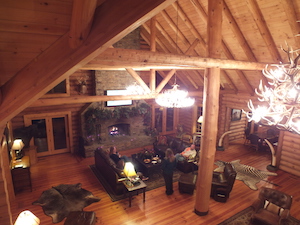 Our first brace of dogs were Sam and Sadie, both Elhew line pointers, and I fell in love with Sadie from the start. Both were great dogs, but Sadie had the classic liver and white coloring with just the right balance of color. The dogs performed like the well-honed team they were and after finding several coveys and singles, we switched out to setters, Rock and Tex. Cherie really liked Tex, an energetic black and white youngster who was as fast as a rocket. Our flushing dog, handling the flushes and retrieves, was a big English Cocker named Nick. Great dogs, working as a team, make quail hunting what it is. Given a choice between leaving out the dog work or the shooting, I’ll take the dogs and leave the guns at home every time.

On this trip; we’re covering a lot of locations and a lot of miles in the Nissan Pathfinder, so we only had one window for our bird hunt. In the pre-dawn morning, I woke up to the sound of pouring rain, but by the time we were downstairs for eggs, bacon, pancakes, and coffee, the rain had abated. Wet birds normally don’t fly well, but these guys buzzed out of the cover with enthusiasm. 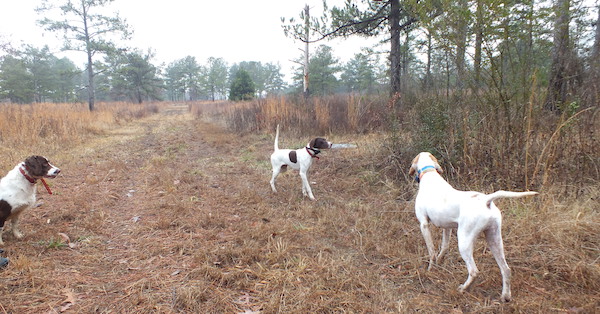 Sadie and Sam with Nick waiting the command to flush the birds.

A trip of a thousand miles begins with one step and on our trip across the country to SHOT Show, the largest arms-related show in the world, our first step was a very nice step indeed. The Dream Ranch is one of the top preserves in the country. The food is great, the lodge is inspiring, and there’s almost every kind of hunting one could desire available. The Dream Ranch isn’t a dream, it’s real and it’s located in the hills of Alabama near Lake Guntersville.