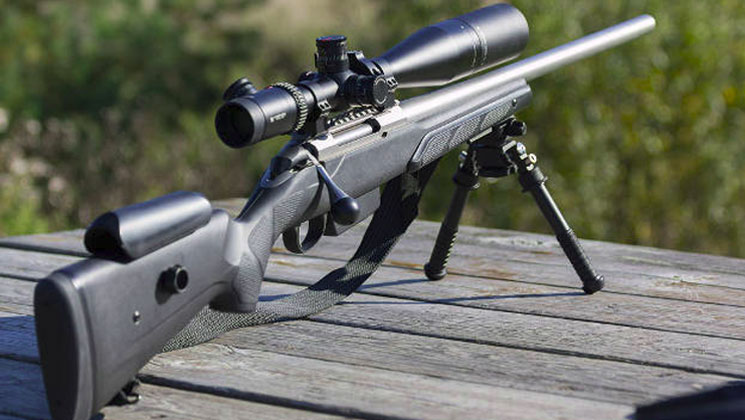 Since we weren’t really prepared for a serious prairie dog hunt, my grandson, Charlie, and I decided our best tactic was to shoot the closer dogs with the .22 rimfire. I had only two rifles in the truck, one was a .223 Remington 5.56mm NATO rifle with a 1-6 Alpen scope. The other was a .22LR semi-auto rifle. I shot a couple of dogs out at longer ranges with the .223, but the extra noise caused the closer dogs to keep their heads down for a longer length of time than the rimfire. Since the object was to get him some shots, we decided to stick with the .22.

I glassed a dog with his head up from behind the mound at a distance I estimated at a bit over 100 yards. The Anschutz was zeroed for a dead on hold at 50 yards and I gave Charlie a holdover guess and told him to hold about three inches right to compensate for a hard right wind. My wind call must have been right, or certainly close and the dog flipped as soon as Charlie broke the trigger. We walked it off and the shot was an honest 130 yards, an impressive good shot for a standard velocity .22. We carried the rifle to include it in the photo and as we were walking back, I impressed my grandson with a 50-yard head shot standing offhand.

OK, I know most prairie dog shoot stories lead off with feats of extreme long range shots, but this was an impromptu hunt that originally wasn’t part of our itinerary. I’d brought a couple of rifles along “just in case” and when we passed a massive prairie dog town in the Badlands National Park, it occurred to me that we might rustle up a hunt for the little critters as we headed back home through South Dakota. I was right.

As we drove east on I-90, I called Marshal Springer, at the Buffalo Butte Ranch, and asked if he might accommodate us for a little shoot as we passed by. While he’s normally booked through this time of year, he had a small pasture that would serve our purposes since we planned no long range shooting.

Buffalo Butte is a full-service outfitter and probably the premier prairie dog location in South Dakota with numerous shooting locations that allow rotation and keep the dogs from being excessively wary. Shooting benches are furnished and hunters are provided with lunches to allow a full day of shooting. The Buffalo Butte Lodge, built in 2003, is a stylish place for a hunt.

Our choice of Buffalo Butte was an excellent one and we were lucky to get a shooting spot on short notice. The best times for prairie dog hunts are late spring and early summer. Once the summer heat hits the prairie, the dogs prefer to lie in their holes during the heat of the day. While there’s shooting available most of the year, mid-May when the new pups begin to come out marks the best part of the season. By the end of June to early July, the shooting is slower in the heat of the day and the dogs are better educated and more wary.

Our trip wasn’t planned but was still a success, but the choice of a proper scope for the Colt would have made a big difference. Even moderately thin crosshairs of a six power scope will cover the whole dog at longer ranges and the ideal scope would probably be in the 4-16 range and more if you have a precision rifle and like to take the longer shots. Drop compensation turrets that are calibrated to your load have real value. Prairie dogs aren’t stationary targets and the ideal shot generally has a limited window of time. The best rifles for this game are flat shooting rifles. Whether you want to go for the really long shots or are happy to bang away at the close dogs, flat trajectories are best. I think the ideal rig would be two rifles, a rimfire 17 for the close shots and an accurate centerfire for the long range bragging shots.

Check your zero and know your ammo

It’s of paramount importance to come to the prairie with a solid zero and an excellent idea to check that zero once you arrive. Even the best rifles can experience a change of zero during extended trips and it’s hard to zero a rifle using dust signature, even for the best shooters. Prairie dogs aren’t shot at known distances like the ones at the rifle range, so you need to be able to compensate for distance. Where we hunted, we had a relatively small field, but even with a flat shooting rifle compensation had to be made for range. If you have limited experience at shooting in wind, be prepared for some education. The wind is rarely quiet on the flat plains and you’ll likely shoot in full value winds that exceed 15 miles per hour. Wind gauges help and a working knowledge of reading mirage would be a huge benefit.

Quality optics can make or break your trip so buy quality glass. Spending the day looking through a cheap pair of binoculars or a shoddy spotting scope is a miserable way to live. Charlie and I used a pair of Steiner 8x32 binos and a Celestron 20-60x80 spotting scope and left it set at 20x. A fixed long eye relief 20x eyepiece would have been even better. It’s been my experience that magnification is less important than resolution. Rifle scopes should have positive and repeatable adjustments. The ability to set your turrets at zero once you have your known zero is critical. Otherwise, you can get lost and that will ruin your day. Don’t forget to check parallax adjustments when you go from close to distant shots if those distances are great. Prairie dogs are small targets and often offer only partial view when hidden behind a mound.

Knowing the range is a huge advantage

When we arrived at our spot, I was certain I’d put my Halo range finder in the truck; I hadn’t and I spent the afternoon wishing it was with me instead of on top of the gun safe where I found it after the trip. Distances on the prairie are deceptive, especially for a guy who was raised in the East where there are always trees or rocks to aid in guessing distance. On my longer shots, I discovered my abilities for range estimation to be lacking. A good range finder will bring your shooting average up in double-digit percentage points.

The sun is relentless most days on the high plains, so wear a hat and use sunblock unless you like the look that makes folks guess you’ve been bobbing for french fries. Modern sweat wicking pants and shirts will keep you more comfortable and make your experience better.

A suppressed rifle is a blessing on a prairie dog hunt for two reasons. First, prairie dogs are sound sensitive and the more noise your shot makes, the longer they stay in the hole. A quality suppressor screwed on your muzzle can turn occasional shooting into whack-a-mole shooting. Had I had a suppressor on the Colt, we would have used it a lot more. Also, having a suppressor means you won’t need ear protection and that’s an added bonus.

More about prairie dogs: Prairie dogs cause damage to farm and grazing land. Their towns cover thousands of acres and the normal practice for controlling them is poisoning. On private land, the only towns that aren't poisoned are the ones reserved for prairie dog hunts, so the dogs actually benefit from farmers and ranchers selling hunts.