How To Improve Your Handgun Accuracy In One Easy Step 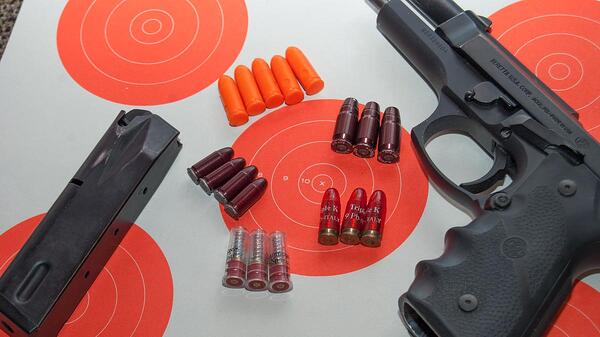 Here's a shooting tip: if you do this one practice routine, you can learn to shoot without missing. Before we get into the secret of how to always hit your target, we need to talk physics.

I know, this is a gun blog, and you never use that high school science stuff anyway. Just hear me out for a minute…

Also see: How to Find A Gun Expert for Real Handgun Training

Almost any handgun, like a Beretta Nano, Beretta 92 series or Beretta Px4 series has less weight than your trigger finger has strength. To go into a little more detail, let’s look at the factory specified weights of a few common handguns:

By now you’re probably thinking, “OK, Tom, that’s a fascinating display of your ability to read the Beretta catalog, but what does that have to do with never missing a target?”

I’m glad you asked! Now, let’s add one more piece of information to that list of gun weights. Now, we’ll consider the weight AND the number of pounds of trigger finger force required to fire the pistol.

If we do some fancy math, compare pounds and carry the one, we’ll see that in every case, the force required to break the trigger is more than the weight of the gun. This means that unless you hold the gun perfectly still while applying pressure to the trigger, the gun will move. if the gun moves during the firing sequence, the shot will impact somewhere other than where it was originally aimed.

When you look at it that way, it’s a pretty simple concept. But what do you do about the problem? The answer is easy. You learn how to press (not pull) the trigger without moving the gun. If you learn how to do that, every time, you won’t miss - assuming you have the gun pointed properly at the target.

How do you learn to press the trigger without moving the gun? Dry fire practice. We’ve talked about it tangentially here at Beretta USA a couple of times. Jason shared his dry fire routine and some tips. I mentioned it in an article about the value of practicing with .22s. But we’ve never covered a step by step process on how to dry fire at home without harming yourself, your family or your new love seat from Haverty’s.

Basic dry firing simply allows you to practice pulling the trigger pull on your gun without all that distracting flash and bang. All kidding aside, it’s a way to train your eyes, body and trigger finger to pull the trigger smoothly, without moving the sights off target. The real benefit is that you can do all this without that instinctive flinch when the gun normally goes bang. By conditioning yourself to perform a smooth trigger press, without a flinch reaction, you’ll eventually find that you do the same with a real gun when it does go bang.

The most important consideration is safety. You have to develop your own method that insures that you will never, ever, ever have bullets anywhere near your gun when you dry fire. All four gun safety rules apply when dry firing too:

Step 1: Remove all ammunition from your gun.

Remove the magazine from your gun. Next, rack the slide to remove the cartridge from the chamber. Look in the magazine well and chamber to verify that your gun is truly empty.

Step 2: Move the ammunition away from your practice area.

Humor me here. Get those bullets you just removed and place them out of reach from your practice area. It’s amazing how life’s distractions can cause you to forget you just reloaded your gun after dry fire practice.

Since we’re obeying Rule 1 and treating our gun as if it’s loaded, we need to aim at a safe target and backstop during dry fire practice. I use a dresser that’s backed up against a stairwell wall. If I did manage to launch a bullet at it, the dresser full of junk would stop the projectile.

If you line up the ammo from your gun like this near your target, you will have an additional visual cue that your gun is still unloaded.

Here’s a tip that I use. I line up the ammunition I removed from my gun on top of the dresser. I place the rounds from the magazine next to each other and set the round I removed from the chamber a bit off to the side. That’s a visual cue and reminder that all of the bullets from my gun, magazine and chamber, are safely removed.

Step 4: Focus on your front sight!

Focus on your front sight, so it’s crisp and clear. Your chosen (safe!) target will be a bit blurry and that’s OK. You want all of your focus on the front sight. Your sight will move around a bit as no one can hold a handgun perfectly still. This is OK and normal.

Never try to press the trigger quickly the millisecond your sights are where you want them - that leads to moving the gun and a missed shot.

Slowly PRESS the trigger as smoothly as possible while the sight is in the vicinity of your target. As you practice, you be able to hold your gun more steady and the sights will move around less on target. The goal here is to complete the full trigger press until the gun’s action releases – without moving the sights off target. Just accept the little bit of wobble.

You’ll notice I say “press” instead of “pull” and that’s deliberate. If you practice a slow and smooth “press” perfectly every time, your brain will acquire an excellent habit. When at the range, you’ll find that the smooth press is automatic.

As the gun dry fires, keep watching the sights until the action is complete. After the gun “clicks”, you’ll want to see the exact same sight picture as before the shot. That’s where your shot would have hit had you been firing a live cartridge. Think of this last step as follow through. Train your eyes to see the sight alignment just after the gun “fires.” Eventually, you’ll know where your shot hit without looking at the target.

Step 7: Reset if necessary depending on your gun type.

If you’re shooting a constant action striker-fired pistol, you'll have to cock the gun after each shot. To do this, just rack the slide. Fortunately, you don’t have to do a complete slide rack. With most pistols, you can pull the slide back ¼” or so and the striker mechanism will reset. Experiment with your gun to see how little of a partial slide rack you can get away with.

Step 8: Make a deliberate show of being done.

When you are finished, reload your gun with the ammunition you moved earlier. Now here’s the most important part - immediately store your gun in its normal place - holster, safe or lockbox. People have dry firing accidents when they reload their gun, get distracted, then resume “dry firing” only to experience a loud bang.

Those are the basic steps of safe and effective dry fire practice. In a future article, we’ll talk about other practice steps you can add to your dry fire routine.

One more thing. Always check with your gun manufacturer documentation to make sure your gun is safe to dry fire. Some guns, like most .22s, should not be dry fired. Most centerfire pistols are OK though.

Remember, do everything slowly, deliberately and perfectly. You are programming your brain so each action has to be exactly the same. Your brain will speed things up on its own when necessary. Brains are really smart like that.