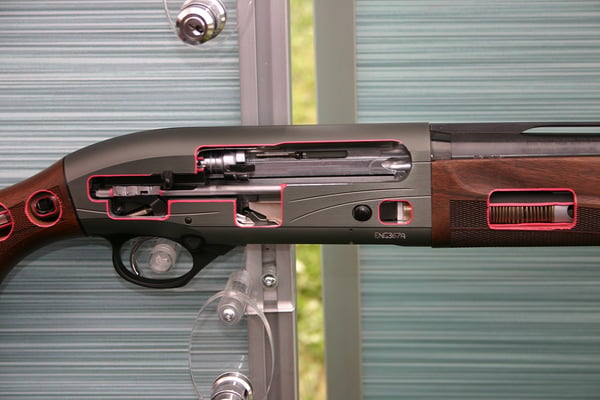 Spend a pre-hunting season Saturday afternoon at a sporting goods store, and chances are pretty good you’ll witness this scenario.

A parent, seeking a first shotgun for a son or daughter, walks in and makes a beeline to the single-shots, maybe with a glance at the pumps on the way. The youth points at the semi-automatic rack but is ushered away quickly. Eavesdropping, you’ll hear: “Too expensive,” “Too big for you,” “Adult’s gun.” Or the worst, “Those are dangerous!”

And you should see the looks when a savvy sales associate recommends a semi-automatic shotgun for Jack or Jill’s first … and forever … shotgun.

Let’s set the record straight on what a semi-automatic firearm is and is not. While they are often called “automatics” or “autos,” that terminology is incorrect and bad for the shooting sports.

Prejudice against a semi-auto as a first gun is usually based on misconceptions about price, complexity, and safety.

Semi-auto shotguns are available in a wide range of prices. A new-in-the-box, basic, reliable semi-auto with a synthetic stock and accessories can be purchased for as little as $500. A high-quality semi-auto equipped with everything a starting shooter needs to grow and develop for years to come – in trap, hunting, and other clay target sports – can be acquired for as little as $750 - $1,000. Semi-autos in this price range offer the most gun for the money of any you will find! Quality used semi-auto shotguns will generally be found at $400 and up.

These prices are a bit higher than single-shots and most pumps, but they represent lasting value. Chances are the new shooter will keep, use, and experience satisfaction with the semi-auto shotgun longer. Properly maintained, the semi-auto will hold higher resale value, too, when and if the time for a change arrives.

Far from complicated, there’s a case to be made the semi-auto is the easiest shotgun to learn to use and shoot well, especially in clays shooting. Firing a semi-auto doesn’t take a lot of thought or movement. This lets the budding shotgunner concentrate on all the other important aspects of making the shot – safety, visualization, routine, target acquisition, swing, trigger pull, follow through, etc. The world’s greatest shooters in all shotgun disciplines shoot either break-actions or semi-autos for this reason. They can concentrate fully on breaking the target with no extraneous “moving parts” to the process.

Another advantage of the semi-auto is the action locks open after the last shell in the gun is fired. This “automatically” makes the gun safe and unshootable until another shell is loaded and the action is closed. There is nothing for the beginner to forget on the firing line. The process is the simplest: load, push button to close action, shoulder gun, fire – action stays open – lower gun, wait for a turn to shoot.

Some look on the simplicity of “pull, shoot, pull, shoot…” until the gun is empty as a strike against safety. However, since only one shell at a time should be loaded in those initial shooting and teaching sessions, this shouldn’t be an issue. If there’s a concern about loading more shells into the semi-auto’s magazine, it can easily be eliminated by dropping a full-length plug into the magazine rendering any semi-auto a true single-shot.

If you’ve ever watched a beginning shooter struggle to pull back the hammer on an old-fashioned single shot, it’s not hard to recognize the simple push button or slide safety on a semi-auto is actually safer.

Depending on the make and model, the semi-automatic action employs either an inertia or a gas system. Both use energy from firing to cycle the action. This creates the advantage of reducing recoil transmitted to the butt of the gun.

Gas operated semi-autos reduce felt recoil more than any other action. Becoming a great shotgunner requires oodles of practice. That means firing thousands, potentially millions, of rounds in a lifetime. For the new shooter, combining a quality semi-auto with light recoiling target loads makes initial shooting experiences more enjoyable, and will keep them looking forward to the next time.

A Gun To Grow With

The idea of a semi-auto as the first and forever shotgun is catching on with firearms makers, too. More are offering downsized semi-autos with options to increase the length of pull and alter drop at comb as a young shooter grows physically and progresses in ability. Interchangeable chokes and even longer barrels can be added to make a first gun a forever gun that can handle any type of wingshooting … for a lifetime!