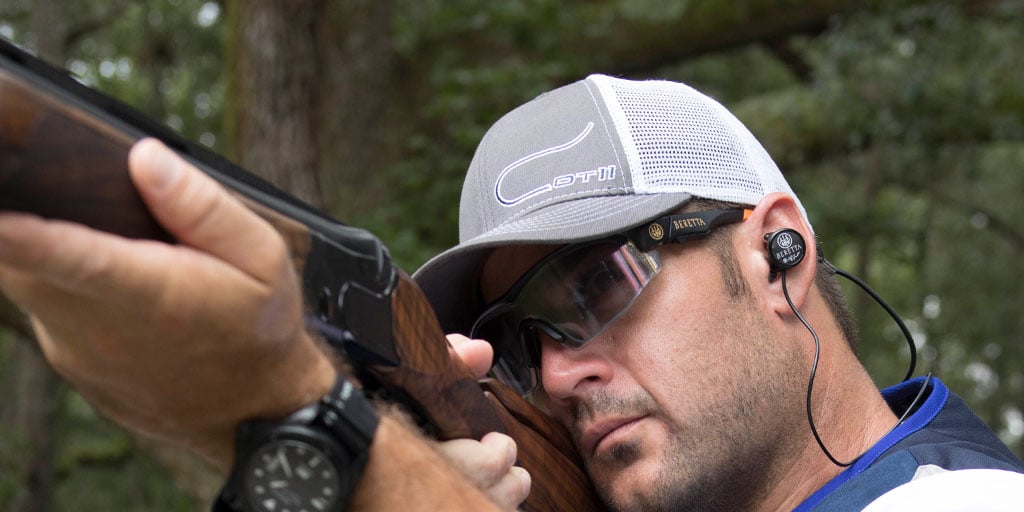 There are two reasons every shotgunner needs to wear shooting glasses. First, and most important is for protection of your eyes. Second, is to enhance your ability to see the targets quickly and clearly.

Protective eyewear is mandatory at most shooting ranges today – as it should be. And it makes even more sense for the hunter to wear eye protection.

The primary purpose of shooting glasses is to protect your eyes from blowback. This is debris such as unburned powder or hot gasses that can be expelled from a firearm when it is fired. Think it doesn’t happen? Think again

The point was driven home to me while videoing a duck hunt a number of years ago. We had a good afternoon, and I’d done quite a bit of shooting. This was back in the days when non-toxic loads weren’t as good as they are now. Everything seemed normal with the footage from the hunt UNTIL we got it back to the editing suite. As we watched a close-up shooting sequence in slow motion, we saw a literal ball of fire come out of the ejection port as the semi-automatic action opened then closed! In real time, it was so fast you couldn’t see it. It was just inches from my face, and I never even knew it was there! Blowback does happen, and you want eyewear that can keep it out of your eyes.

You also need your shooting glasses to protect you from flying shells and target debris. When you crack open your auto ejector equipped over/under you’re launching those empties directly at your face. If you catch them … great. If you miss, shooting glasses protect your eyes.

Skeet shooters breaking high seven know how often shards of clay rain on you if you don’t catch that one dead center. Shooting glasses keep the pieces out of your eyes if you forget to wince and duck.

Upland bird hunters in particular benefit from shooting glasses, too. Moving through cover is rife with probability that a tree limb, pine needles, a cornstalk, or cattail stem can catch you square in the eye. It’s an “ouch” and perhaps a trip to the ER you can avoid with shooting glasses.

Even the finest shooting glasses are not “bulletproof,” and that isn’t what they’re designed for. However, they have saved the eyesight of many hunters who were victims of errant pellets in the field. Sadly, many who weren’t wearing shooting glasses have lost their sight. A dear friend’s brother was part of a pheasant drive in South Dakota, and he took a #4 pellet to his left eye from about 100 yards. Though he went through many medical procedures, he ended up losing the sight in both eyes due to the damage and sympathetic blindness. He wasn’t wearing any glasses; had he been, he would probably still see today.

For reliable protection, off-the-rack sunglasses and even regular prescription eyeglasses won’t cut it. The lenses you’ll find on most shooting glasses are made from polycarbonate, which is the same thing bulletproof glass is made from. Obviously, the lenses of the shooting glasses are much, much thinner. Polycarbonate won’t shatter to create shards that can reach your eyes making things even worse.

There are two standards for certification of shooting glasses: ANSI and Military Standards.

ANSI stands for American National Standards Institute. Their requirement is for the lenses to stop a .25-inch steel ball traveling at 150 fps. That’s not nearly strong enough to stop a shot pellet fired at even moderate range, but it will handle all of the other reasons you wear shooting glasses and perhaps a pellet fired from a long distance. Look for the Z87 certification on the glasses or the packaging.

Military Standards for shooting glasses are higher. Their certification is called MIL-PRF-31013 and requires the lenses stop a .15-inch diameter steel ball traveling at 650 fps. Not many shooting glasses achieve this high standard. If you find a Mil-Spec pair they will be expensive, but worth the extra money.

If you need it, prescription correction in shooting glasses will absolutely help you see the targets better. General eye health is important overall, and all shooters should be the first in line when it comes to annual checkups with the eye doctor!

However, the primary way in which shooting glasses help shotgunners see their targets better is by filtering the light through different colored lenses. Light conditions, backgrounds, and target colors all come into play in how well and how fast you’ll pick up on targets. The proper choice of lens color can make a world of difference.

While some makers have taken lens tinting nearly to the custom level (meaning you can get about any color and level of tint you can dream up) there are five basic colors every shotgunner should consider:

CLEAR – If you’re only going to have one pair of shooting glasses, they should have clear lenses. They work in the widest range of conditions including shooting in low light and even under the lights, which is common in American trap and skeet shooting. Clear lenses don’t distort colors, which can be important for game identification and safety while hunting.

GRAY/GREEN – The colors of traditional sunglasses, gray and green work for shooting in the bright sun as well. Gray, especially, enhances contrast and depth in bright conditions.

YELLOW – On gray days, and even in fog, yellow tinted lenses seem to make the sun shine. They are great for hunting in these conditions, though you’ll note some loss of color perception. They make white stand out brightly. Some shooters experience headaches from intensely tinted yellow lenses, so start with a light tint, and work your way up to see what’s best for you.

PINK/VERMILLION – These red-family colors are commonly worn by clay target shooters because they make the orange targets we shoot really stand out against a range of backgrounds – especially a light colored sky. Vermillion has become a standard all-around for clay target shooters.

PURPLE – Purple tinted lenses may look odd, but they are the number one choice when shooting orange targets against a green background like so many shots in sporting clays. Against leaf cover, they enhance the orange and push back the background so you can focus clearly on the moving target.

If you hang around the trap range enough, you’ll see a lot of shooters with blinders on the temples of their shooting glasses. Trap shooters know exactly where their targets are going to appear. They don’t need to catch movement out of the corners of their eyes. In fact, it could be a great distraction to them. The same goes for skeet shooters.

However, in sporting clays and definitely in hunting, seeing incoming targets or game in your peripheral vision can enhance your score. In both situations, you still need protection for your eyes from the sides, so consider shooting glasses in which the lenses wrap around the sides of your head. These offer both peripheral vision and protection.