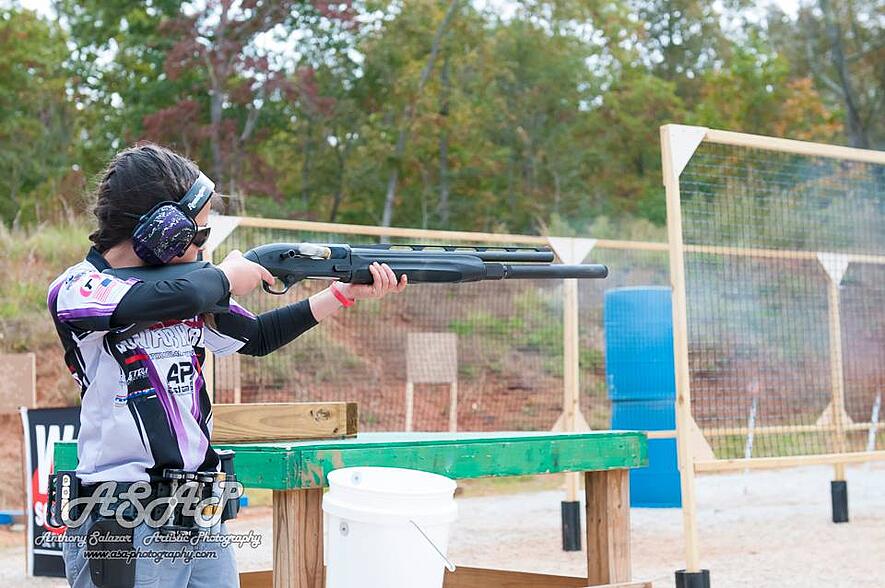 Shyanne Roberts is a normal 10-year-old girl, but she is anything but average.  This New Jersey native started compteting with firearms at the age of 7, and she is now a sensation in 3-Gun competition.  Shyanne has chosen the Beretta 1301 Comp as her competition shotgun, and I recently got the chance to ask her why she chose the 1301, how she got started in competitve shooting and what's in store for her in 2015. Jaci: First off, thank you very much for taking the time to chat with me today. For the readers out there that may not know who you are, tell us a little bit about yourself and how you got involved in shooting at such an early age?

Also see: A look at the Beretta 1301 Tactical shotgun

Shyanne: Well, my Dad was a Certified Firearms Instructor even before I was born. He always said if there were going to be guns in the house that my little brother and I would know from a very early age that they weren't toys and had to be treated with respect at all times. He started teaching me the safety rules when I was around four years old and let me sit on his lap to shoot his Ruger 10/22 so I would know what it sounded like. Once I was around 5 and I could tell my Dad the safety rules any time he asked from memory, he let me start shooting some more to show I could safely handle a gun also. After I showed that I could, he bought me my first rifle, a Cricket Bolt Action Single Shot .22 for my sixth birthday. We took it to a gun shop and indoor range to use it and almost right away my Dad could see that I seemed to have a natural talent for shooting. I could call bullseye shots at 30 yards and do it over and over.

After about a year or so of just target shooting, my Dad asked if I though I might like to try entering a match.  I did and I loved it, and that's how this whole crazy ride I'm on got started.

Jaci: I happen to know you love your Beretta 1301 Competition Shotgun, what was it about the 1301 that made you choose it over the other 3-gun ready shotguns available today?

Shyanne:  Honestly, I hadn't tried anything else before I got it, I originally started out with a Remington 1187 20 gauge, but we had some issues with it.  A good friend of my Dad and I, Lisa Marie Judy, met us at the NRA Convention in Indianapolis last year and invited me to come shoot the Lady 3 Gun Pro Am. Over the Summer we kept in touch, and when she found out about the all the problems I was having with my 1187, she helped me get my Beretta 1301. Once I got it and shot it, I fell in loved with it - It cycles so fast and smooth, and is so much more reliable than my 1187. And it was a 12 gauge to boot! So many people are always surprised to see a ten year old girl running a 12 gauge shotgun like a boss!

Jaci:  I've had to make modifications to my shotgun because my arms are pretty short, so I would make a guess that you've had to do the same.  What modifications have you made to the 1301 to fit your small frame?

Shyanne:  To be honest, I havent made any size modifications at all. It's actually sort of funny, because when I have my competition magazine extension installed, the shotgun is almost as long as I am tall.  I'm also turning 11 this coming Summer and my Dad says I'm growing so fast that I can just grow into it instead of changing anything. Thats' working out so far.

Jaci: What advice would you give someone that is thinking about buying a 1301 Comp?

Shyanne:  I would tell them to buy one! It's a really smooth and fast shooting shotgun, ready for 3-Gun right out of the box. We are doing some modifications this winter getting ready for 2015, but they are the same ones everyone does to their shotguns. Adding a Match Saver, welding the shell lifter, opening up the feed port, adding a magazine extension, stuff like that. I'll probably add some of my famous purple “bling“ parts to it also, like a purple bolt release paddle and some other details just to make it mine.

Jaci: You recently shot the Lady 3-Gun match as a member of the Beretta USA Team, how would you describe your experience at that match?

Shyanne:  Oh boy, I could talk about that match all day! I had so much fun, learned so much and made so many new friends, range “moms” and “sisters”. The Lady 3 Gun Pro Am was my first ever really big, National level match. I got to hang out with all the Pro Ladies and become friends with them. I finished last, but thats ok. I went there to learn as much as I could, from the best women shooters in the country and to prove what I've been saying, that kids can use guns safely, and have a lot of fun doing it if they learn the right way to handle guns.  I still came home with an awesome prize, a purple AR 15 that was built and donated by Geiselle Automatics for the “Tough as Nails” Award. That was because of something Chad Francis, Katie Francis's Dad said. He was an RO on one of the stages and after I started, he could see I was really getting pushed around by my shotgun and reminded me I could switch to my pistol. I said “No, I'm going to finish this”. Later that day, he found my Dad and told him I was “ Tough as Nails” because I just wouldn't quit or give up. Coming from Katie Francis's Dad, that meant so much to me.

Jaci: What was your favorite match to shoot in 2014?

Shyanne:  The Brownells Lady 3 Gun Pro Am for sure, not even close.

Jaci: What practice drills do you do to improve your shotgun skills?

Shyanne:  Right now my hands are too small to do “Load Four” drills, so I'm practicing on getting as fast as I can on “Load Two” drills to make up for it.  I'm also practicing mounting my shotgun to get a good cheek weld. Dianna Liedorff was helping me at the Pro Am and saw that I was shouldering my shotgun a little bit too low, and showed me how to do it right.  I've been working on that and on a conditioning routine to build up my arm strength so I can handle the shotgun better and faster without having to take short pauses during a string.

Jaci: In addition to being a competitive 3-Gun shooter, you're also a very outspoken Second Amendment advocate.  What compelled you to become a pro-rights activist and what would you like to say to people that think you're too young to be shooting anything, much less a sport like 3-Gun?

Shyanne:  New Jersey was trying to pass another law in the Spring of 2014 to make the maximum size of magazine 10 rounds, down from the currrent 15 rounds, which is already half as many as most of the rest of the country. That was when I was just building my first AR 15 and getting ready to start shooting 3-Gun.  It made me mad that I hadn't done anything wrong and the State of New Jersey was trying to make it even harder for me to compete by trying to pass that law.  So, I talked about it with my Dad and he said I could go to the Capitol if I wanted and tell the people there what they were doing was wrong and how it would effect me and my ability to compete.

Jaci: I've heard that you've got some big plans for the rest of 2015, Where will you be shooting your 1301 this year?

Shyanne:  We're still trying to work that out. I know Im going to the NRA Convention in Nashville in April. We might even have a really, really big announcement to make while we are there. I plan on going to the MGM Junior 3 Gun Camp in VA in July, shooting the Three Man 3-Gun Match in Topton PA, I'd really like to try to make it to Rock Castle in KY, and maybe the World Shoot in Virginia. Frog Lube and Trijicon sponsor that match, and they are both sponsors of mine, so I really hope I can make it. And I'm super excited to shoot the East Coast Brownells Lady 3 Gun Pro Am again!  I'm still in school, and there's a law about how many days I have to be in school, even if my grades are all straight A's, so we have to be careful about how many days I miss for shooting matches.