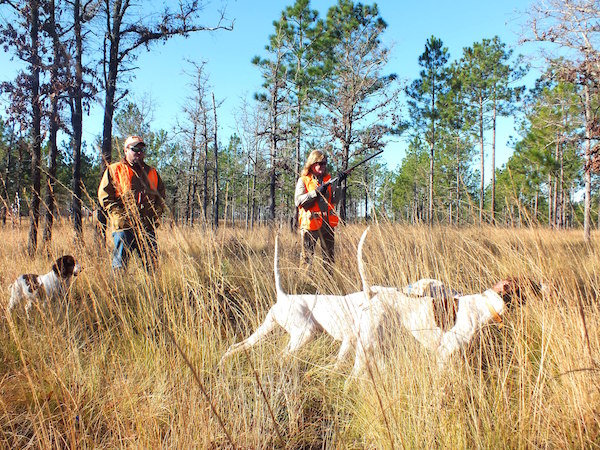 On Point: Chief and Sugar on point, with Kicker poised for the flush.

We were heading into the morning sun across a wire grass and scrub oak-covered knoll to pick up a long shot I’d just made. Spot, an English pointer, locked up and Joker backed. I assumed he was pointing my downed bird. The flushing cocker bounced in for the retrieve when the guide called, “dead bird,” and a single quail got up, flying strong and definitely not a dead bird. My wife, Cherie, was on the right side and downed the bird about 20 yards out. As the cocker headed out on the retrieve, another single popped out and I took the shot while Cherie was reloading. I broke my gun down and when one of the pointers moved forward, still another bird bounced out of the knee-high scrub oak, just as Cherie closed her gun. This one was hers, and she dropped the little bobwhite rooster in the wire grass. Incredibly, as she was reloading, another bird flushed and we eventually got six birds out of the spot within a few yards of where we eventually found my original dead bird. You can never predict how it’ll go on a Georgia quail hunt.

The fact that it’s so difficult to choose a thoughtful and desired gift at Christmas says something about just how blessed Americans are. Many of us simply have everything we need, and perhaps the most stressful thing about Christmas is finding something appropriate to give to someone we love. Several years ago, my wife took up wingshooting and we’ve enjoyed the sport as a couple since that first hunt. She fell in love with the country, the dogs, and the excitement of the shooting. Now, we often give each other a day of quail hunting as a gift, and Cherie likes nothing better than a trip to a classic quail hunting location. 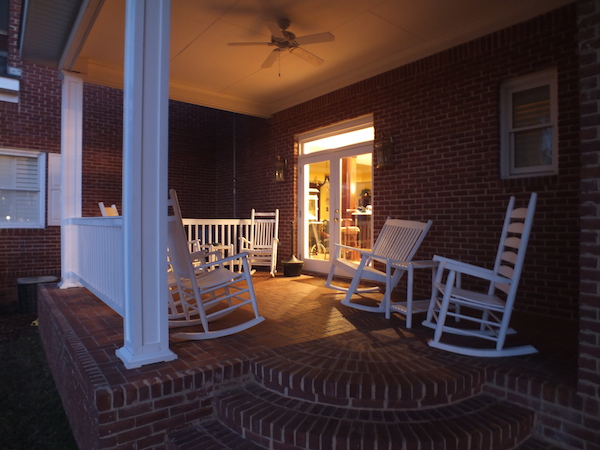 Porch: The South isn’t the South without porches and there are plenty of porches at Southern Woods for telling lies or smoking cigars.

Southern Woods is located in the heart of classic quail country in Sylvester, Georgia, just a few miles south of town on Route 33. The long driveway passes through a pasture and rises over a gentle ridge that reveals the plantation house just over the crest. With a large pond in front of the house, the brick façade with tall columns reflects the heritage and romance of the Antebellum South. Inside the lodge, the décor is classic southern hunting, with hardwood floors and high ceilings. Beautifully decorated, with trophies, memorabilia, and overstuffed chairs, the main room’s walls feature African trophies including the big five, with an imposing shoulder mount of an African elephant over the massive fireplace. There are 31 well-appointed guest rooms, 24 in the main part of the building and seven more in the recently added clubhouse. Some have doors opening into the hall and others are grouped around central meeting areas with kitchen and bar facilities for large groups.

After the afternoon hunt, the clients gather around the house bar to swap stories about guns and dogs while waiting for the dinner that’s served at seven. Cherie and I arrived in time for drinks and had time to acquaint ourselves with other guests before we got to the steaks. After eating, we lingered over conversation with other clients before retiring to our rooms to catch up on emails and get ready for the morning hunt.

At Southern Woods, everything is organized and runs on schedule, yet it somehow seems relaxed and casual. The day begins with an 8:00 am breakfast of bacon, eggs, grits, and biscuits. At 9:00 am, the parade of Khaki, Green, and Burgundy colored hunting Jeeps towing dog trailers pulls up to the circular drive in military precision. Hunters are assigned a Jeep and guide as the day begins. This level of relaxed organization may be the reason Southern Woods was chosen by CNN as one of the top six hunting destinations in the country. 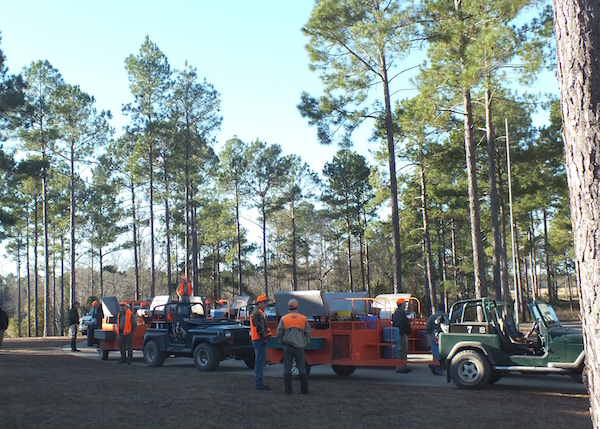 This is classic Georgia bird hunting in rolling, controlled-burn pines and wire grass. Though the plantation has a kennel of 140 dogs, many of the guides use their own dogs. The normal arrangement is two pointing dogs and a cocker flushing dog, and the dog work may well be the best part of the trip. Our guide, B. J. McKinnon, of Nashville, Georgia, owned his own dogs and, in sequence, we worked six pointers and B.J.’s little cocker, Kicker, as our flushing dog. The birds flew fast and the dogs worked well. Like every guide I’ve ever drawn at Southern Woods, B.J. felt like an old friend by the end of a hunting session.

Cherie and I got back to the plantation a little later than some of the other hunting groups because we’d spent a little extra time talking with B. J. about dogs before heading in. When we arrived at the dining room, almost everyone else was seated, and the table was covered with stainless covered serving containers of steaming pork loin, squash casserole, butterbeans, corn on the cob, and iced tea. This would be pretty standard lunch fare at a Georgia quail plantation, but this lunch was remarkable not just because it was delicious, but also because the vegetables were all raised on the plantation. I knew this, but the others at the table where Cherie and I were eating were amazed when I told them. It may be Southern Woods best kept secret. I only learned this because I just happened to be in the neighborhood of Sylvester, Georgia, one day in late summer and wanted to show Cherie the plantation. We arrived on pea shelling day, and the wives of the guides were all down at the shed, shelling field peas. Meticulous attention to details and providing the best possible trip is something I’ve learned to expect at Southern Woods, but raising their own food for the clients to enjoy goes a bit beyond the norm for a game preserve. 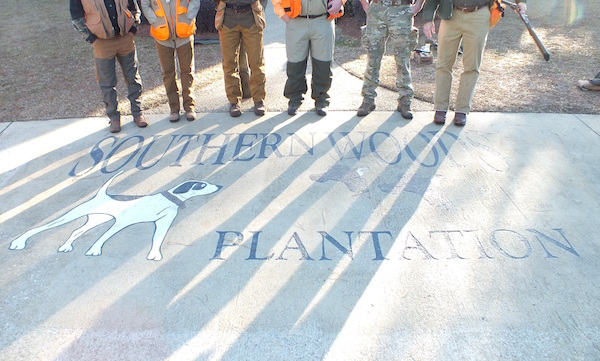 Long Shadows: When the hunters line up for the morning pickup, the shadows over the pines are still long.

After lunch, clients have time for a siesta before the parade of Jeeps and dog trailers assembles in the circle drive for the afternoon hunt and three more hours of great dogs, fast flying birds, and beautiful Georgia pines and wiregrass. Eat, hunt, eat, hunt, sleep, repeat, not a bad way to spend time.

South Georgia is dotted with game preserves. In fairness, I haven’t visited most of them, but I’ve traveled quite a bit and shot at a lot of places. I don’t recall another game preserve where the attention to detail was so well executed. Operator, Benjie Deloach, has been running Southern Woods for 19 years and he runs it like a well-oiled machine. In spite of this, he seems as relaxed as he would if he were just there for a day of hanging around. Benjie is quiet and soft spoken, yet every aspect of the experience has been flawless every time I’ve been to Southern Woods. 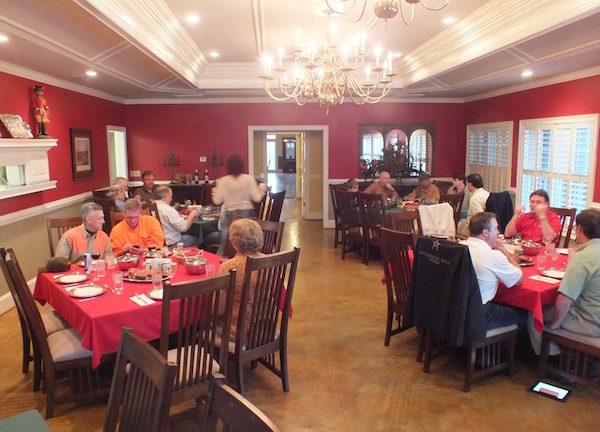 Dining: The dining is southern comfort food raised on the plantation served in a comfortable southern setting.

There are quail lodges that spend more effort on the trappings and tradition. Southern Woods doesn’t offer spas or side excursions, but they offer a wonderful hunting experience for an individual, a couple or a group and they do so for a very reasonable price. The dogs, guides, birds and food are exceptional, the lodge is reasonably priced, and they can even pick you up at the airport. I can’t imagine a better gift for someone than a day or two or three, of sweet southern hospitality at Southern Woods.