Tactical vs. Gun Lights: Which to Use? 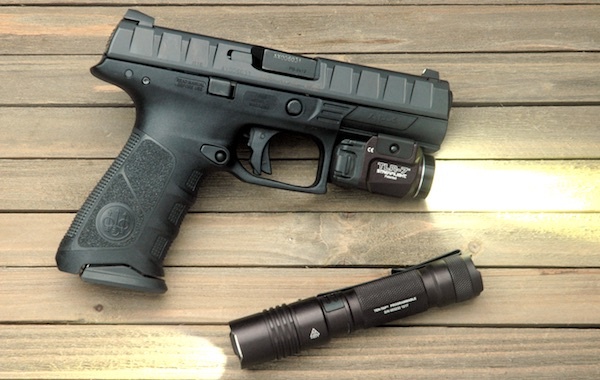 It’s 8:20 on a summer’s evening as I type this, and twilight is starting to settle in over the small town in Florida where I live. My wife and I will go for a walk after I’m finished with this article. I’ll have a concealed carry pistol with me as I usually do, along with a mobile phone, some other stuff, and a powerful handheld “tactical” flashlight. I consider a small, powerful light to be an absolutely essential part of my everyday carry, and I’ve come to see the benefits of having a light on my firearm as well. Both are useful, and both have their roles for self-defense.

Also See: Shooting the Beretta 1301 in the Dark

Why you want a flashlight

We as a species discovered early on that having an artificial light source was a really useful thing, so we invented the campfire to keep away predators at night. Campfires are big and bulky, though, so we quickly invented the burning branch to light up our way at night and to keep predators at bay as we moved from place to place.

And that’s precisely the role that the modern tactical flashlight performs. A bright handheld light (150 or more lumens) lets you see clearly at night inside and as well as outside. It also allows you to see and identify the people around you that might want to do you harm. More than that, though, they can also help defuse a dangerous situation before it happens and also be used as a less-lethal means of self-protection.

A bright flashlight can be used to defuse a situation before it happens because, in a crook’s world, there are two types of people who most often carry and use bright flashlights: police officers and security guards. Both spell trouble for our bad guy, and so when they spot a bright light outside at night, they know something very bad might be coming as well. A bright flashlight shined into the eyes of an attacker at night can also blind them for a brief time, giving you time to try something else, and this trick can work in the daytime as well, provided your flashlight has sufficient output. In a pinch, a sturdy handheld flashlight can also be used as a striking tool to add a little more impact to your punches.

Why you want a weapon-mounted light

Weapon-mounted lights have pretty much the same power as a handheld light, but they serve an entirely different purpose. A handheld flashlight is meant to be used primarily to find your way and identify people before they become a threat and secondarily as a less-lethal defensive tool. There are techniques that can transform your handheld light into something that helps you see your target better in low-light situations, but the reverse is not true. For the armed civilian, a weapon-mounted light serves one purpose: To verify that what your gun is pointing at is indeed the target you want to shoot. A weapon mounted light is not meant to be used to find your keys, and they’re not for lighting your way on a dark night. It's a light that augments the effectiveness of your weapon, and nothing more. Think about the rules of gun safety, and the need to keep the gun pointed in a safe direction: Is sweeping your firearm back and forth keeping it pointed in a safe direction? Yes, police and the military use weapon-mounted lights on their guns all the time, but their jobs probably involve actively hunting for bad guys much more frequently than yours does.

Is there a place for a weapon-mounted light for we armed citizens? Absolutely. A weapon-mounted light works really well on a home defense gun, which typically are used in situations where you want to be crystal-clear that the target in your sights is hostile, and not a friend or loved one bumping around inside your house late at night.

There are also times when you want both a weapon-mounted light and a handheld light. For instance, the 1-2 punch of using a handheld light to find the bad guy and then using a weapon-mounted light on your pistol to verify that yes indeed that person in your sights needs to have a gun pointed at them is an advantageous technique that works both inside and outside your house. A tactical light is also useful when you’re using a weapon-mounted light on a long gun like a tactical shotgun or a rifle for activities like searching around your house after an incident, or all the other hundreds of things that make a good flashlight so practical.

How powerful of a light do you need? The simple answer is, powerful enough to do the job, and maybe a little more. Maybe a lot more. I myself prefer both my handheld lights and my weapon-mounted lights to have at least 250 lumens worth of output, and more (much more) if at all possible.

Whatever option you chose, a bright handheld flashlight should be a part of your everyday carry. They’re just too useful to be without.