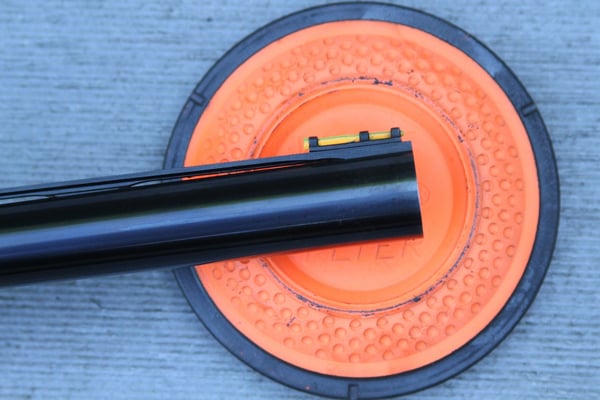 The debate over beads is so great, it cannot be contested, or even in explained, in one post, so we’re giving it a second. In Part One we learned the difference between single-projectile firearms which you aim and a shotgun which you point with a lot more margin for error. We also learned a shotgun will work perfectly well without beads and that some folks think it’s best to learn to shoot one that way. And finally, we covered front beads and mid-beads on modern shotguns.

Now it’s time to explore why many … make that most … top shotgunners consider highly visible beads so crucial on both target and field guns.


Early examples were simply silver metal or sometimes ivory beads. Today, it’s far more common to see brightly colored beads. And many shotgunners are addicted to “light pipes” which are long optical plastic tubes that catch and gather light to shine brighter than Rudolph’s nose at the end of the barrel. These come in changeable fluorescent colors to optimize your ability to see them in a variety of lighting conditions and against any background.

Skeet champion, Olympic shotgunner, exhibition shooter, and shotgunning instructor, the late John Satterwhite, recognized the importance of the shotgun bead as a reference point beginning in the late 1960s and early ‘70s.

Do you remember those straight edge rulers that were on the “Required School Supplies” list at the beginning of each year? Most of us had to settle for a wooden ruler with a metal strip embedded in the edge, but the cool kids had those fluorescent green or pink plastic jobs that acted sort of like a prism. John told me in the days before these brightly colored light pipes we now see everywhere, he and his teammates would buy those rulers at the dime store, carefully trim pieces out of them, and mount the pieces to their guns.

Do Not Focus on the Bead

It seems like a lot of headache and expense to create a highly visible bead that you’re not supposed to look at and which some shooters tell you’re actually best to do without. Actually, successful shotgunning requires that you see the bead, but not focus on it.

One of the most common reasons for missing a target – right behind lifting your head and stopping your swing – is that you were looking at the bead instead of the bird. In the mounted gun games, it’s easy to tell if the shooter (even yourself) was focused on the bead when they called for the bird. The muzzle makes a squiggle or figure-8 before the swing smooths out and tracks the bird. This is because your brain is telling your hands, arms, and body to move to catch the departing bird, but your eyes are taking their sweet time changing focus from the bead to the target then telling your brain which way it’s actually going. In really bad cases, the focus can switch from bead to bird and back two or three times, and that’s a guaranteed loss.

While you should never focus on the bead(s), it is important they show up in your periphery or “unfocused” vision. If you’ve properly mounted the gun, the bead is your best reference point of exactly where the muzzle is pointing. “Seeing” the blurred bead while focused on the target makes it easier for you to make those instinctive adjustments while pulling the trigger and maintaining your swing.

Think you don’t see the bead or the barrel when you’re in the zone? You may be surprised. Try this in a practice session when you’re shooting really well.

Do everything as you normally do – pre-shot routine, call, swing, pull trigger, break bird. But as soon as you know you broke the target, close your eyes and recall the exact picture you saw as you conclude your follow through. Most if not all shooters recall seeing the bead and barrel, albeit out of focus, in relation to the bird.

No beads, one bead, two beads, dull beads, mid-beads, and bright beads all have their fans and detractors. And there are reasons for each. However, starting out with a new shotgun you’ll probably be happiest and progress fastest with a bright, light-gathering bead of some kind on the end of your barrel. And if you currently shoot with a dull bead, but seem to have hit a plateau in your progress, experimenting with a bright bead might break the dam and help you move ahead.