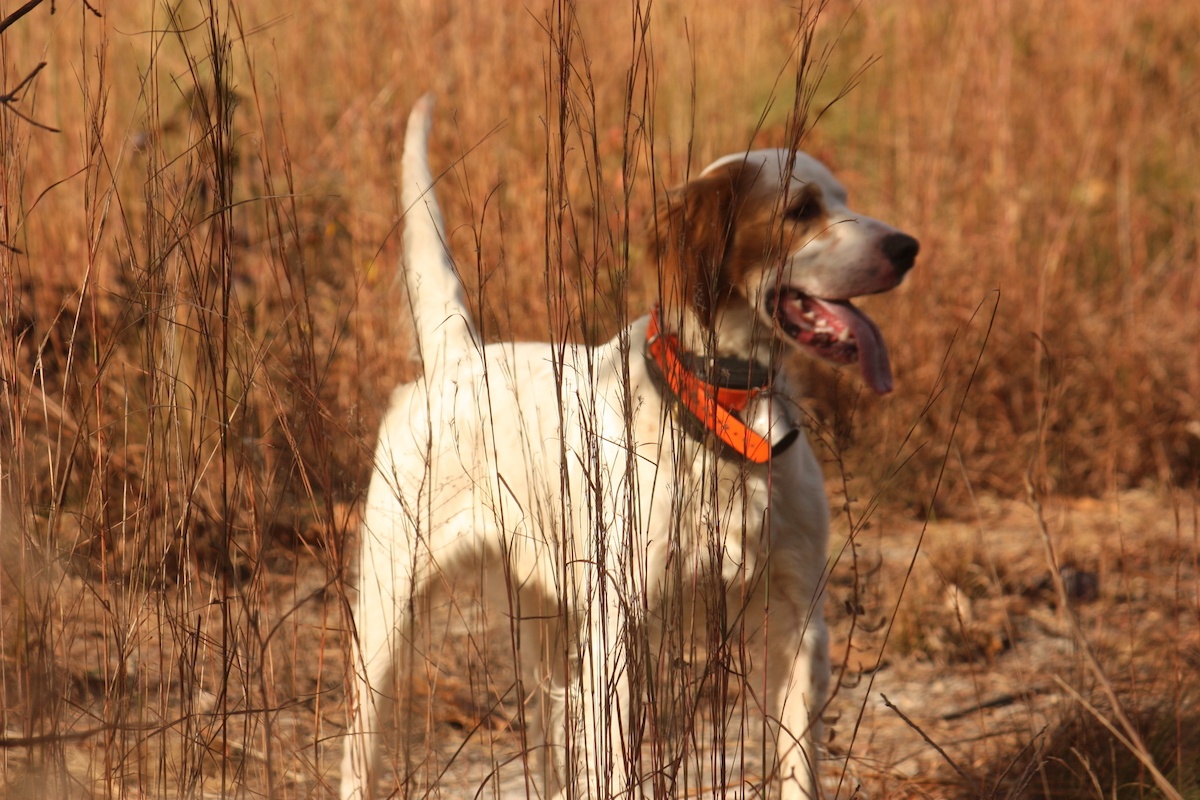 If you own a bird dog, let alone a string of 'em, then the odds are you're a fanatic. You know what their every movement and noise means. But if you're hunting over a buddy's dog, then you might not be as keyed into their tells. That's not a problem unless they're on point and you're far away. Here are some of the many different ways dogs give us clues about what's going on when they're hunting.

We all remember those perfect days when every dog put down was jam on. That might be because they had frequent bird contacts and were extra focused. But dogs have stellar days when there are fewer birds around, and that's largely due to the fact that the scenting conditions make it easy for them to find birds. Cool or cold days with air temperatures very different from the birds' body temperatures mean that the dog is easily finding the bird. Moisture from a light rain, a dusting of snow, or even the morning dew helps the cause, too. Light-variable winds cause the birds' scent to waft around and dogs hit scent very quickly. Good scenting conditions reduces trashy points, and dogs aren't likely to run over birds as they might during hot, dry, windless days. They'll be relaxed, intense and find the birds.

Running birds leave behind foot scent. Birds that are stationary for prolonged periods of time give off what is called body scent. Foot scent is weak and spread out throughout the cover and fields while body scent is strong and concentrated. Dogs that make initial contact on foot scent means that they are getting close to the prize and their behavior changes. Sometimes the changes are subtle while at other times they are more pronounced. Study your buddy's dog to see how it shifts gears and zeros in on a bird.

Bird doggers watch these changes to get ready for a point, flush and shot. Sometimes, a dog becomes more animated mostly because they're getting close to the reason they're working so hard. As the dog moves from searching to foot scent that whiff of goodness fires them up. You'll see snappier footwork out of some dogs just as you'll see quick directional changes. Those directional changes are normal for birds rarely run in straight lines. As the wind changes or a dog runs off the scent, they'll need to readjust. Quick directional changes are common for them to get back in the game.

Other dogs respond to the scent by moving increasingly faster through fields and coverts. The dog that was once casting rhythmically has found clues to what it has been looking for the entire run. As they pick up foot scent, they want the body scent so they'll move faster and more deliberately to find the bird. In doing so, they'll quickly eliminate birdless areas and move on to ones holding game.

As some bird dogs speed up others slow down. Some dogs are simply more methodical in the way they nail a bird. It's not that their prey drive is any less, it's just that their way is more deliberate. They cautious and careful and don't want to make a mistake.

Frequently their body carriage changes and they'll drop slightly lower to the ground. Their speed may decrease, too, and they'll go from a run to a trot and on down to a quick walk. Dogs that know a bird is around but aren't quite sure where it is might creep. While the ideal is for them to find and point the bird with confidence that isn't always the case. Creeping up to a point comes from weak scent on a hot day, but it's important that the dog pin the bird before the shot.

It's ideal for a bird dog to run with a high head because picking up wafting scent is easier. While some dogs carry that high head right up to a point, others drop their heads closer to the ground, particularly if the scenting conditions are tough. That change in head carriage can indicate that they're getting close to the bird.

Whenever you notice a dog shifting gears it's time to get ready for the point. If you have a dog running inside of bell range, then quicken your own pace to close the gap between you and your dog. Some wild birds hold for long times while others feel the dog's pressure, get nervous, and walk off. Shift that shotgun from your shoulder. Carry it in the ready position so you'll be ready to mount, swing and shoot. When the dog finally locks up, you'll be locked, cocked and ready to rock.

The fun part is that all dogs behave differently, so watch the ones that are working hard for you. Then you'll be able to uphold your end of the bargain and put feathers in their mouths. You're a team, after all, one of the sweetest ones of which I know.