Being a rookie is one of those life necessities. Every time we learn a new skill, we’re rookies for some period of time. It’s not a bad thing; it’s just our required learning period. In sports, the “rookie” label often applies to a player's first year in the big leagues. When it comes to handgun shooting, you can shorten your “rookie season” by learning and implementing the proper techniques right away. Let’s look at a couple of the most common rookie mistakes and discuss how to banish them to distant memories.

The “Weekend at Bernie’s” dance. The backward lean. The “let me get as far away as possible from this impending explosion in front of my face” stance. Whatever you want to call it, the number one rookie mistake, at least by frequency, is leaning away from the gun. I’m not even talking about whole body positioning. I’m talking about just the torso – from your belt line to your head. If you watch a first-time shooter who has had no coaching, you’ll almost certainly see them lean backward from the waist while thrusting the gun forward. When you tell them to lean forward into the gun, they’ll usually thrust their hips forward while continuing to lean backward from the waist. The position looks a little bit like those old-time boxing stances that guys with huge mustaches assume. It’s a natural reaction based on the brain’s desire for self-preservation that we’ve probably been fine tuning since the caveman days. When you set up to fire a handgun, an explosion is about to happen right in front of your face, so the tendency is to lean away from it. It’s common sense, right? 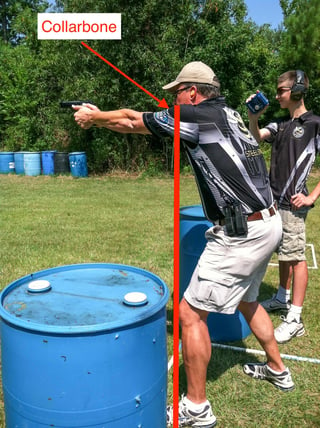 Unfortunately, this technique, while great for avoiding getting punched in the face by an irritable mastodon, is lousy for controlling a handgun. Because a pistol launches a projectile forward, it has to move backward. Because Newton. To combat that recoil, it’s up to the shooter to push forward into the shot so they can be the boss of their gun, not the other way around. If you start firing while your upper body is leaning backward, you’ve given up all ability to control the gun with your body weight. Each time you fire a shot, your body will move farther and farther backward right up to the point where you start to lose balance. You’ll notice that the muzzle will rise above the target and that you’ll have to work to bring it back onto the bullseye after each shot. Your range neighbors will notice that your technique looks kind of silly.

While people will argue forever about the proper placement of feet and arms, getting the upper body leaned into the shot is the most important thing you can do. Here’s how to do it right. Make sure that your collarbone is in front of your belt buckle. That’s it. If you do this, I can balance a penny on your collarbone. When it falls to the ground, it will not hit your belly, waist, or legs on its way to the ground. That means that your whole body is leaning into the shot. That means that your handgun is going to encounter some serious resistance to its recoil motion. That means you’ll remain on target for the next shot. You’ll be controlling your gun. It’s that simple.

Here’s a mistake that persists because it seems, and feels, so entirely logical. When you’re trying your very best to hold a handgun steady on target, it’s going to move. Those sights are going to sway, drift, and sometimes bounce right off the bullseye. That’s because we’re not robots. Our bodies are constantly shifting and balancing, we’re breathing, our muscles are straining to hold the gun into position, and our hearts are hopefully continuing to beat. All of this creates a shooting platform that’s not entirely stable. As a result, the sights are going to hover and move around the perfect center of your target.

It seems entirely natural to try to fire the shot at the exact instant your front sight moves across the bullseye you want to hit, right? The problem is that this seemingly sensible technique will often cause you to miss – in a big way. Why? Making a good shot depends on two primary considerations: sight alignment and trigger control. Once the sights are lined up perfectly, it’s up to the shooter to execute a perfect trigger press. That means moving the trigger until the shot fires without moving the gun. If the average handgun shifts just 1/10 of an inch, that translates to a whopping five inches off target 25 yards down range. That’s how important it is to press the trigger without disturbing the alignment of the pistol.

By definition, when you try to break the shot at any particular fraction of a second, you are, by definition, rushing the critical second part of the accuracy equation. That frantic motion to press the trigger quickly as the sights pass over the bullseye almost always results in a jerky trigger press that moves the gun as you do it. The result? A miss.

As strange as it might sound, ignore the movement of your sights on target. Instead, focus on executing a perfect trigger press. If you do that, your gun won’t move, and the shot will land somewhere in that small zone of sight wobble. That’s OK. As you practice more and more, the degree of sight movement will decrease, and as long as you’re focusing on the trigger, your shots will continue to land in an ever-decreasing circle represented by the gun’s movement.

So there you have it, two of the most common rookie mistakes and how to correct them. The good news is that you can banish these rookie techniques on your very next outing to the range.