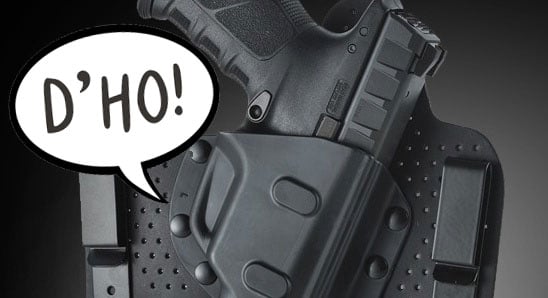 Everybody has a first time. You know what I mean. You might start to perspire. Perhaps you develop a nervous tick. Everyone I know is, at the very, least anxious their first time. And if we’re all honest with ourselves, there’s probably more than a bit of outright fear bordering on panic. That’s right: I’m talking about the first time you go out in public carrying a concealed firearm.

It’s OK. All of those reactions are perfectly normal. And if anyone tells you they didn’t have any trepidation their first time, they’re probably fibbing. Not only is some healthy apprehension expected, but it's also probably a good thing. After all, you’re venturing out into the world carrying a lethal weapon. Of course, you have no intention or desire to use it. It’s there in case you experience that really bad day that far too many others have encountered. The world can be an ugly place.

Also See: Two Mistakes Rookies Make In Handgun Shooting – And How To Fix Them

While the first time is a necessity, you’re also venturing into new territory with life and death consequences, so you better prepare as much as possible in advance. Today, let’s discuss a couple of rookie concealed carry mistakes, and more importantly, how you can avoid them. Just to be clear, the intent is not to make fun of new concealed carriers. In fact, my attitude is the more, the better. We’re just trying to help shorten the learning curve that we’ve all faced.

The Problem (The wrong holster)

I just bought myself a new Bugatti Veyron. To save a few bucks, because saving money is wise and smart, I fill it with 23% Ethanol diluted with 19% regurgitated restaurant fryer oil. It saves me several dollars per month on gas, and since I dropped a cool two million on the car, I figure I’m making sound financial decisions!

OK, that’s a ridiculous scenario, but it’s exactly what happens far too often when someone buys a concealed carry holster. After dropping five hundred or a thousand bucks on a handgun designed to save our very life under the worst possible circumstances, we tend to get all cheap when it comes to picking a holster.

“Fifty bucks for a holster? That’s crazy, I can get one from Epic Deal Mart for $19.99, and that comes with a 10% manicure discount coupon!”

Here’s a thought. Just as that Bugatti Veyron is only as good as the gas you put in it, your ability to use your gun in an emergency situation is limited and enhanced by the equipment used to secure and present our gun. Yes, training is the most important factor in any self-defense situation, but if your holster fails, then all your training is for naught. And by fail, I don’t necessarily mean break. Even that $19.99 gun sack probably won’t fall apart under normal conditions. What I’m talking about is a failure to do what a holster is required to do. In my book, that boils down to three things:

So here’s the bottom line. Price doesn’t always equate to quality, but it’s a darn good indicator. Don’t blink over spending $50 to $100 on a quality holster that fits your needs. Not only did you spend far more than that on a reliable gun, we’re talking about something that could literally help save your life. Find another budget area with lesser consequences to trim instead.

The Problem (Getting all touchy-feely)

Since we’re talking about first times, I might as well take the plunge and talk about inappropriate touching too. But seriously, I chose this mistake because it’s so closely related to the first, and the solution is in part the same.

When you start carrying a gun, pay very close attention to how many times you touch it when you’re going about your daily business. Better yet, count the number of touches per hour. Got the number? Great, now triple that, and you have a good indication of how often you’re likely fiddling with your concealed gun. It’s a new thing with big potential consequences, so it’s a natural human instinct to check, re-orient, and verify that that’s still there.

Here’s the problem. If you’re fidgeting with your gun, other people can see that too. While most people we encounter are so immersed in their smartphones they wouldn’t notice a nearby meteor impact, there are a couple of groups that are tuned in to spot such behavior: police, seasoned criminals, and other concealed carriers. If you’re legal, and almost all concealed carriers are, the police issue isn’t something to be overly concerned about, except for the fact that you may be making them think you’re a twitchy criminal about to do something evil. The group to worry about most is the experienced bad guy crowd. Those are the very last people you want to know that you’re packing.

So how do you prevent your nervous gun check habits? There are two steps. First, get a quality holster that performs with excellence the three functions we discussed earlier. That alone will ensure that your gun will remain where you want. The second step, which relies on the confidence that a quality holster provides, is to raise your consciousness about when you fidget and check so you can stop it. A habit takes a couple thousand repetitions to form. In this case, we’re breaking a habit so it might take a thousand self-training catches to stop yourself from subconsciously checking your gun all the time.

Here’s another tip that will help. When you’re out in public, make a game of trying to spot other concealed carriers who are doing the touchy-feely thing. The more you spot others making the same mistake, the more you’re thinking about it, and the more you’re exorcising that demon from your own routine.

In fairness, there are times you want to develop discreet touchy-feely habits. For example, I seem to have developed a habit of grabbing my shirt hem when I get up from a chair or out of a car. I carry inside the waistband almost all the time and have found that more often than I would like, my shirt can get caught up on the gun grip while I’m sitting. As I stand, I discreetly grab and pull down my shirt hem on the gun side to make sure it’s not riding on top of my gun, exposing it for all the world to see. It’s a similar habit to women straightening their skirts and men tweaking the knee area of slacks when they stand to make sure clothes settle back into place properly.

So, there are two things you can implement immediately to start improving your concealed carry sophistication. There’s a lot more to cover, and we’ll get into those tips in future articles.