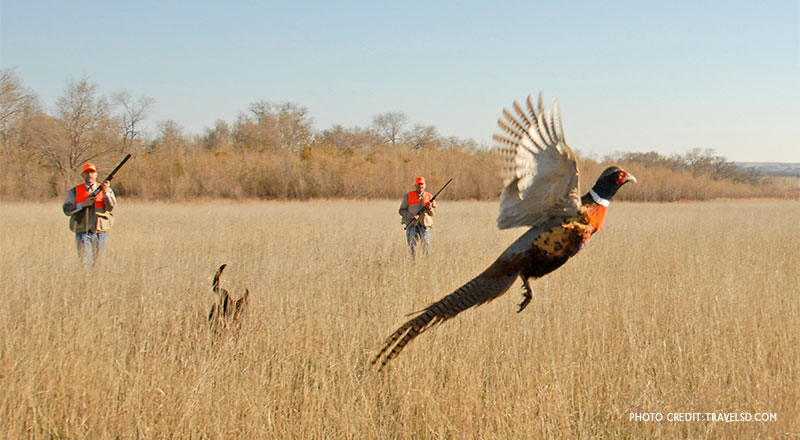 With Hunters in a line, it’s not only safer, but there are more safe directions you can shoot. Photo credit Travelsd.com

A while back, I hunted with Mike Johnson, a friend who runs the Clinton House Game Preserve in Clinton, South Carolina. My son in law, Jeff Jordan, had just begun training his first Boykin spaniel. Mike owns some of the best bird dogs I’ve ever hunted over, and his Tillie is the best flushing dog I’ve ever hunted over. It was a treat for Jeff to get to hunt over Tillie and he was full of questions. As we walked up on Mike’s pointer, Tank, who was locked up like a concrete yard ornament, Jeff asked, “Why did you decide to get a Boykin as a flushing dog?” Mike’s reply was, “I got tired of walking out in front of loaded guns.”

Upland hunting is a wonderful way to spend time outdoors. The shooting is challenging, the dog work is entertaining, and the birds are, for the most part, tastier and easier to prepare than waterfowl. It’s great exercise and it allows social interaction between hunters. It is, however, potentially dangerous because upland birds tend to fly in unpredictable directions. The birds don’t know which way to fly to best evade the hunters and sometimes fly right into the faces of the hunters or dogs. Often, birds fly very low, just over the tops of cover, and they sometimes flush late, when hunters and dogs are gathering up the birds just taken.

Of course, the hunt can be, not only safer, but also more enjoyable if all the hunters obey safety and courtesy rules. Safety dictates that shooters constantly be aware of the location of everyone, including the dogs. Bird dogs are thin skinned and somewhat fragile compared to other breeds. They have little fat, and even bird-shot fired from a considerable distance can penetrate to their vitals. They’re also well trained and bred, expensive animals and they deserve the utmost consideration for their safety while doing their work. 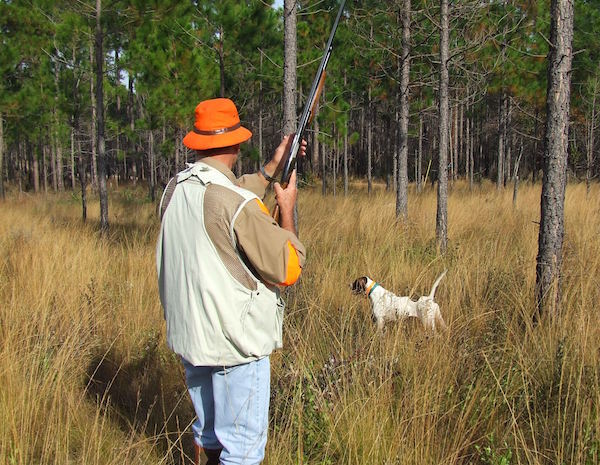 Keep muzzles elevated at all times when hunting over fine dogs. A dog may well be more valuable than the vehicle you drove to the hunt. Photo by Cherie Jones.

Hunters should be aware of the dogs at all times since upland birds often flush without warning. Many times, quail and other upland birds fly close to the ground so low shots should only be taken when you’re certain you won’t be swinging your gun on a dog working in tall cover. Normally there are two or three dogs in play at all times and if you don’t know where the dogs are, don’t shoot.

In the old days, dogs weren’t considered truly trained unless they were steady to wing and shot. This means that the dog should stay in place when the birds fly until directed by the handler to move. This allows the guns more vertical range to cover safely with their shot. In more recent times because of changes in the way field trials are run, dogs aren’t trained to hold at the location of the point until released. Often, modern training methods allow the dog to begin the retrieve as soon as he sees a bird go down. If a bird is flying low and the dog is running out to retrieve a previously shot bird, it isn’t safe to take the shot because of the chance of hitting the dog. Generally, low shots should not be taken. Low flying birds often stop short, so wait and flush the bird again for a shot.

The best way to safeguard the hunters is to keep everyone in a straight line. In some upland situations, there are three or more people in the field. With a guide and two hunters, all three should stay in a straight line allowing shooting in all but one or two directions. With a guide and two hunters, the guns can each cover 270 degrees without endangering the guide or well-trained dogs. With more than three guns and all hunters in a straight line, the center guns can shoot in front or, provided they elevate their guns to vertical as they turn, behind them. The guns on the ends can shoot 270 degrees. This way, walk up shoots with ten hunters in the field can be as safe as two hunters.

Of course, muzzle awareness is always an issue with loaded firearms and it’s particularly important in upland hunting. Gun muzzles should be kept pointed up, to keep the dogs safe. If hunters turn to shoot behind them, the gun should be pointed straight up while turning and hunters should never rotate unless they have firm footing. A falling hunter is a danger to himself and everyone around him.

When dogs point, it’s courteous to both dogs and hunters to advance to the point at a fast but reasonable pace. I often guide at game preserves with my Lab, Larry. Larry’s a pointing Lab and he points a bird when he locates it. Pointing Labs aren’t conditioned to point until the cows come home. The idea is to allow them to range a little further than a flushing dog. The point allows the hunters a little extra time to get to the dog before the bird flushes or runs or before the dog breaks point and busts the bird.

Most people sneak up on a pointing dog as if the dog was pointing a land mine. Guides often have to urge the hunters to stay in line and maintain the safety the line affords. When the dog points, move in as fast as is reasonably possible on the direction of the guide, especially when birds tend to flush early or run or if the dog is a flushing dog and has found a bird and is pointing or paused.

Of course, no line of hunters is safe if one of them doesn’t obey safe fields of fire. Since the bird can flush and fly in any direction, hunters must assume a plan only to shoot when it’s totally safe. This means the gun on the left doesn’t have a shot if the bird flies to the right. Only the gun on the right is safe to shoot then, provided the bird is high enough and no dogs are in that direction. 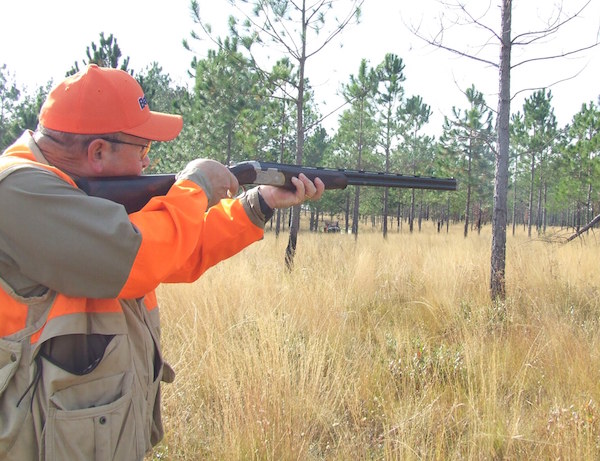 It’s sometimes permissible to take a low shot, but only if you’re sure of the location of every hunter and dog. Photo by Cherie Jones.

All this is just common sense tempered with past experience in upland hunting. If you’re hunting with a guide, ask him how he likes his clients to approach flushes. If you’re hunting with others, let the man with the dog or dogs make the decisions. In the thrill of the covey rise or the explosion of a flushing pheasant, it’s easy to get excited and make a mistake that will be regretted for a lifetime. Getting in the habit of safe, courteous hunting can result in safer and more successful hunts and greatly enhance your upland hunting experience.