What Is a Shotgun Target Load? 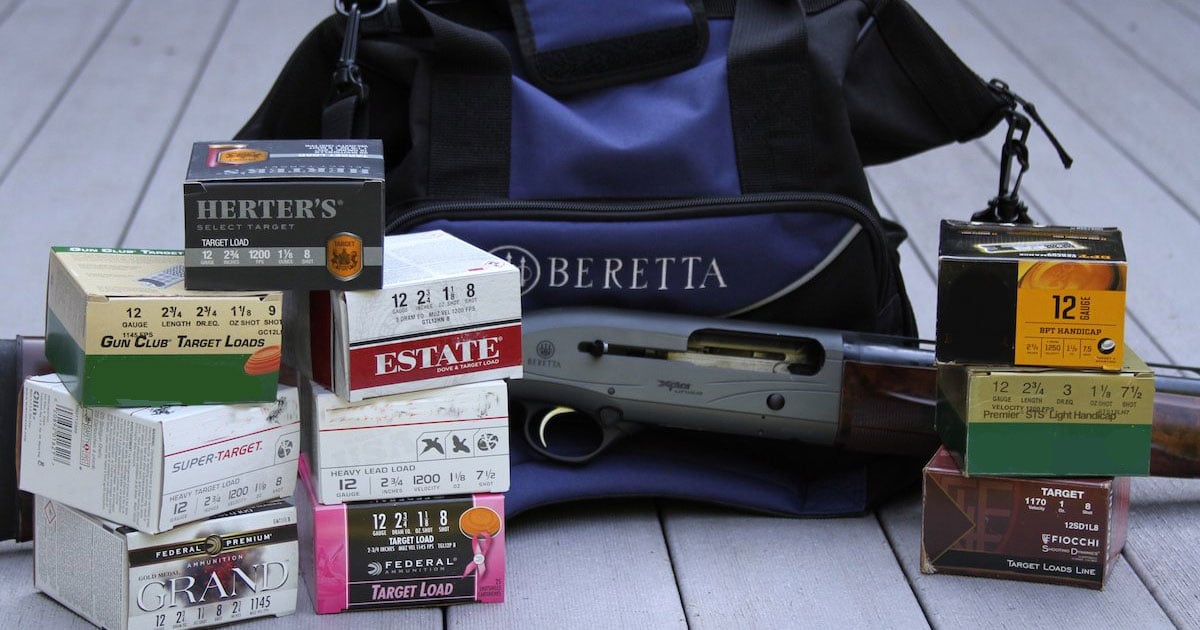 All boiled down, a target load is any shell you drop into your shotgun with the intent of breaking a clay target. That can be anything from the most bargain basement, off-brand promotional load to a $5.00-per-shell exotic metal non-toxic variety.

What the majority of us shoot falls somewhere in the middle. However, you may have a lot of questions about “target loads.”

All target loads are built with the same five basic components:

The most visible part of the shell is the hull or case. Today, this is nearly exclusively a plastic case with a metal head. The head is usually steel or brass depending on the brand and the load. For some time, there was also the “Activ” brand that quite successfully loaded all-plastic shells with no external metal head.

The qualifier “nearly exclusively” is because Federal still produces an annual run of paper case target loads under the brand name “Gold Medal Paper.” These are beloved especially among older trap shooters for nostalgia and the opinion that all else being equal, paper case shells produce less felt recoil than plastic case shells. Watch a shooter who shoots “Federal Paper,” as they are known, and you’ll almost always see him or her pick one up, put it to the nose, and inhale deeply. Just fired paper hulls produce an aroma that’s a shooting aphrodisiac to many old timers – yours truly included.

At the rear of the hull, in the center of the head is the 209 primer. When struck by the firing pin, chemicals inside the primer explode, creating a powerful, very hot spark to ignite the powder. It’s important to note the material inside the primer is the only “explosive” part of any cartridge. Gunpowder burns rapidly and with great force, but it does not explode.

Inside the case, the smokeless powder rests on the primer. It’s the amount and type of powder that determines the velocity at which the payload will leave the muzzle, and partially the recoil level.

The powder is compressed at the rear of the shell by the base of the wad, which is fundamentally a plastic cup. The wad seals the powder at the rear of the shell so when it burns to create expanding gases, the majority of the force is used to push the wad and shot forward. The wad also contains the shot to prevent deformation as the payload is launched set-back and moves down the bore.

The final component is shot. In 12 gauge target loads, the payload can be anything from 24 grams (slightly less than 7/8 oz.) in shells for international trap and skeet to 1 1/4 oz. for box pigeon shooting. Most commonly available today are 1 oz. and 1 1/8 oz. shells. For clay target shooting, the common shot sizes are #7 ½, #8, and #9. 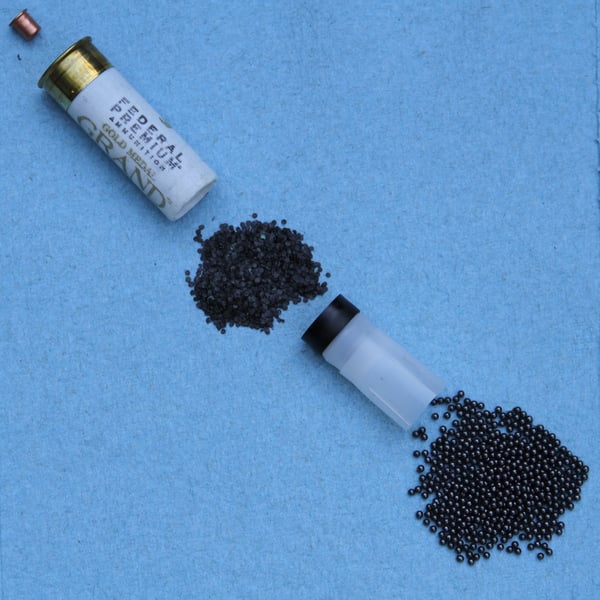 A word about shot size: If you choose to purchase your shells before heading to the range, be sure to check on any restrictions there may be regarding shot size. Larger shot carries farther, and some ranges have limited shotfall zones. You may be restricted to smaller shot sizes for that reason. Additionally, a few ranges require the use of non-toxic (steel) shot only. In either case, the club nearly always sells ammunition on site to meet its requirements.

Why the Range in Prices?

If shotshells loaded for target shooting all include the same five components, then why does the price of shells within the category range so widely? The answer is in the quality of the components used and the standards to which the shells are made.

The least expensive shotshells are called “promotional loads.” These are loaded by major ammo makers, but have last names like “Game & Field,” “Dove & Target,” “Gun Club Target,” and others. Promotional loads are loaded to a performance standard, which is an average velocity for the payload. However, the actual components in these shells can change without warning. Powder blends and amounts may vary, so long as they safely achieve the velocity standard. Same with wads and primers. The lead shot is not as hard as that in top-shelf loads.

The biggest difference is the hulls. The cases of promotional loads are much thinner and made by a process called polyforming. After being fired they may last for only one reloading, or perhaps not even that.

This makes it possible to sell promotional loads for as little as $5 to $6 per box.

On the high end of the price range are the target loads on which each company makes its reputation, like Federal Gold Medal Grand.

These brand stake shells are Formula 1 racecars of the shotshell world. It’s here that companies make a name for themselves among the top competitors. The more winners shooting Brand X, the more wannabe winners will shoot Brand X. But winning over top shooters is no easy task. Top competitors spend long hours at the patterning board figuring out whose and which load patterns best from their gun. They test velocities, choke/shell combinations, and anything else they can think of.

When they select “their” shells, they need assurance those shells are going to be consistent – not just against a standard, but with exactly the same top-quality components that were in the shells they tested. For example, the Winchester AA has been the Winchester AA – same hull, same primer, same powder, same wad, and same shot … for a long, long time!

Top quality target loads feature the hardest possible shot, which means higher antimony, which means more expense. They are also loaded in hulls made by compression forming or other processes which are slower and more expensive but produce hulls that will stand up to many reloadings. That adds value for high-volume shooters.

At the level of competition in which winning shooters break hundreds straight, any miss by a super-shooter is viewed with great suspicion. Was it because of a mental lapse on the part of the shooter? Probably. But it is possible there could have been an inconsistency in the shell. Building top-brand target loads the way they do, the ammo makers seek to eliminate this possibility – and usually do.

So are the name brand shells worth the money? It depends. Promotional loads are very, very good. Brand stake shells are the best.

To go out on the Back 40 and shoot hand-thrown clay targets or get together with friends at the sporting clays course for an afternoon of fun – go with the promotional loads; save your money to buy a round of refreshments in the clubhouse. If you’re a serious competitor, and/or hand loader, you probably want high-end shells. If you shoot a weeknight league it’s up to you.

Different shotgun games have different requirements for shells. Each governing body sets payload and velocity limits for the shells its competitors may use. Most of the standards you’ll hear are for 12-gauge loads; however there are restrictions in skeet and sporting clays for sub-gauge events with 20, 28, or .410 shotguns, too.

Though most makers have gone to clearly listing velocities on target load boxes, some promotional loads still use the dram system which is a remnant of black powder days. Look for 12-gauge loads with 3¼ drams or less.