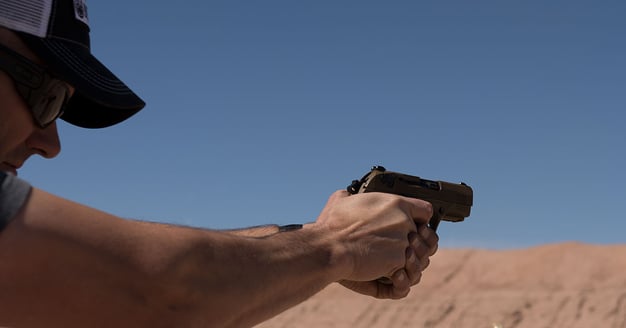 Certainly, there are situations where it does, and like many other factors, the benefit depends on the kind of shooting and the capability of the shooter. For the beginning shooter, a super-precise and repeatable trigger can be a detriment to accuracy. In precision shooting, a precise trigger is certainly an advantage. Under those conditions that light and exact trigger allows the shooter to fire the gun with a very low-pressure level, making it less likely that the shooter will move the gun.

Bench rest and long-range precision shooters use triggers that are so light the gun almost fires with a wish. Under those circumstances, the firearm is well positioned and stable, either from the use of an artificial rest or the tension of a shooting sling. For precision shooting from less stable shooting positions like standing, sitting or kneeling, advanced handgun and rifle shooters use the precision of the trigger, taking up most of the resistance and breaking the trigger with a bit more pressure as the gun moves into the center.

The practice of increasing pressure on the trigger as the gun comes into the center is a tricky proposition for new shooters because there’s the tendency to "grab" the trigger, causing movement through the pull itself or through recoil anticipation. It’s a technique that takes a lot of practice and can generate bad habits for newer shooters.

In fact, the best results for new shooters almost always come from the shooter not knowing exactly when the gun will fire. Most new shooters, especially new pistol shooters already have problems with anticipation of recoil or flinch. Grabbing the trigger when the sight picture is perfect is the primary cause of poor accuracy with new shooters.

As a trainer and coach, I’ve learned the method to avoid this is the surprise break. This involves the shooter increasing pressure until the gun fires, rather than grabbing it when the sight picture is best. To accomplish this, I use a target with a non-penalty area large enough to allow the shooter to easily hold the sights within that clearly marked zone. I tell the shooter that any hit in that area is a perfect shot so there’s no reward for a perfectly centered shot. Then I have the shooter take up the slack in the trigger at the beginning of acquiring the sight picture and begin increasing pressure as soon as the sights are in the non-penalty zone.

The first shot is almost always a centered shot. Depending on the ability of the student to resist the temptation to grab a center shot, subsequent shots will stay centered or reflect recoil anticipation as the shooter figures out just when the trigger breaks. For this exercise, a trigger that’s totally predictable gives worse results than a vague and inconsistent one, because it’s easier for the new shooter to learn when to flinch.

The effects of recoil anticipation (flinch) can be illustrated to the shooter by using dummy rounds mixed in with live ones. Load random rounds into the magazine or cylinder. When the striker falls on a dummy round, the shooter will see his or her flinch. I point the direction of movement out to the shooter and remind him the next round might also be a dummy. Generally, the next shot is centered because the shooter is really focused on getting a surprise break, but the process must be repetitive to become a conditioned response.

Sometimes you’ll see a really good shooter dip the gun on a dud round, but this is explained by the fact that managing recoil for fast repeat shots requires pushing the gun back down and really good shooters push the gun back down immediately after the striker falls. It looks like recoil anticipation, but in this case, it’s recoil management. The difference between recoil management and recoil anticipation is timing. Poor shots come from managing recoil before the striker falls.

Often, new shooters want to learn to shoot fast and add accuracy later. I suppose this may be possible, but it’s certainly not likely because shooting fast teaches bad habits that must be overcome before accuracy is possible. For a capable shooter, a competition trigger allows speed and accuracy. For a new or just adequate shooter, a precise and repeatable trigger makes it easier to anticipate the exact instant the gun will fire, and this is counterproductive to accuracy. Yes, you can learn to shoot with a gun with a really good trigger, but, for the beginning shooter, it may be more of a handicap than a help.