The Toughest Waterfowl Gun Ever! 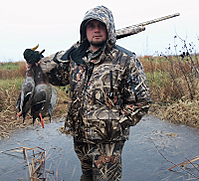 Every single duck season I listen to hunters swear by their gun. They say it is the toughest gun ever made. Then about two weeks into season they are swearing at it, throwing it in the truck and changing stories. I only have one response: "If you are up to your butt in alligators, it is hard to remember that you just came to drain the swamp." Translation, if you are not shooting a Beretta A400 Xtreme then you can wish in one hand and crap in the other to see which fills up faster!


The reason I say this is I used to be in that group. I shot guns because of the tradition of my family or I saw a long bearded man shoot one on TV. It is so easy to become an industry "go around". Shooting a different gun than you did last season. When the rubber meets the road there is only one that stands alone when the bad weather moves in, Beretta. Now, you probably are justified to say "he is really harping on that Beretta." Answer: Yes I am and proud of it.

There is a difference in someone being paid to say good things about a gun on television and someone who actually believes in what they are saying. Bottom line is, I have said this before, tough hunts don't last but tough guns do and that is why I shoot the Beretta A400 Xtreme.

I leave you with this story. Towards the end of the season we hunted a day where the weather was everything from snow to hard sleet with the temps in the upper teens. Two of the men hunting with us that morning were shooting another gun that has to do with an eagle and by the end of the hunt they were shooting our Beretta's because there guns would not cycle in the extreme conditions. The moral of that story is if you are shooting a hammer then everything is a nail, but if you lie down with dogs don't cry when you get the fleas.

A true duck hunter has to get to a place in his life where he swallows his pride and decides he is going to shoot the best. I know this because I had to do it myself. So, go get you a Beretta A400 Xtreme and quit getting advice on the color of your car from a blind man.