A few days ago, I harvested a great-looking deer. Here's how it went...
Equipment Used: Beretta 390 with a fully rifled cantilever barrel from Beretta. Burris Fullfield II 3-9x40 scope. Remington 385 grain, 2 3/4" AccuTip slugs.
Got in the stand at about 1:30 on Monday, 11/14/11. It was the first low wind day in about the last three days. Heavy winds and rain finally moved out and the afternoon was almost totally calm. We are about 4 days past the full moon and the time was right for big deer to be on their feet looking for does. 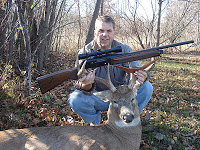 I was in a elevated ground blind on one of the few hills in the flat land corn country of Newton Co., IN. At about 3:15 PM I heard some movement in the thick brush to the NW of my stand. Close, very close. Since the wind was so low the noise was easily recognized as that of a deer. The snap of a twig really echoed. Before I knew it, there he stood, out of the brush and on the edge of a cut corn field. And only 20 yards away. I was low and out of sight in the blind so he never saw me. All I needed to do was stand and take the shot. But, first, I had to get the safety pushed over to the "fire" position. But, with him being so close, I really had to be careful not to snap it into the "fire" position.


I managed to get it to the fire position, stand and take aim. The deer, at this point, was only 27 yards away and gave me just enough of a quartering away shot. As soon as I pulled the trigger and saw him hunch up his back, I knew the shot was good. He still managed to jump over a fence he was standing next to, but it didn't matter. He ran about 50 yards into a cut corn field and piled up, DOA.

The whole encounter took less time than it probably took you to read this. But that's how it goes. Two minutes worth of excitement that creates memories for a lifetime.


Did you harvest your first buck yet? How did it go?