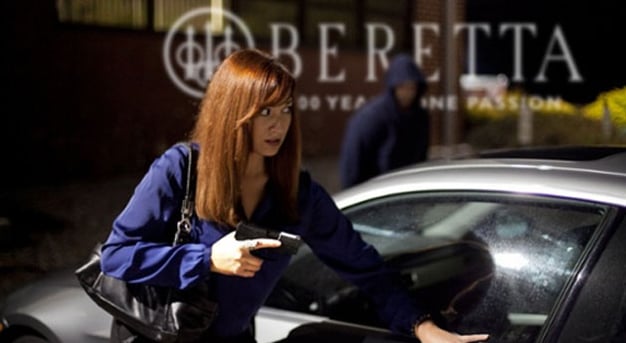 I thought I was going to actually have to use my Conceal Carry (CC) gun a while back. My daughter and I had just returned from hunting. We were parked more than twenty miles from town on a highway in the high country. We had just loaded the horses in the trailer and gotten into our truck.

We sat in the truck at the trailhead parking lot eating a sandwich and warming up. A white mini-van with no license plates drove up. As it parked in front of us we noted two men were in the front seats. They sat in their vehicle for several minutes as a trooper ticketed someone else on the other side of the highway. After the trooper pulled away the men got out of the van and approached our truck.

Without saying a thing my daughter immediately locked her door. I took out my cell phone and as the men headed our direction. I snapped a picture of them and their vehicle. I pressed send and texted just the picture to a police officer who is a family friend. My daughter asked me why I was doing that. I explained it probably wasnt the best picture, but at least if something happened, someone would know who to look for.

We were in a one-ton truck with a trailer load of horses. A quick get-away would not be an option if things turned bad. My heart rate increased as I feared the worst.

The two made their way to my side of the truck. One man was on a cell phone and the other waved hello. I cracked my window about a half-inch. The man said they had broken down and asked if I would drive them to town to get transmission fluid. I declined, lying to them that we were waiting for my husband and friend who were hunting, but told them I would call for help. I immediately pressed a speed dial button phoning my officer friend whom I had just sent the picture.

I gave the officer a description of the events and our location. He immediately called dispatch to send an officer our way.

I told the strangers help was on the way.

My daughter and I waited as the men walked back to their vehicle. Once they were in I put the big diesel in gear and we drove away as quickly as we could.

In the end there was no immediate threat - so the CC remained on my belt.

There are many people in our country who are embracing their Second Amendment right and purchasing a gun for protection, including Conceal Carry guns. I hope these individuals are taking a certified Conceal Carry firearms course in conjunction with their purchase.

Carrying concealed is a huge responsibility. I hear a lot of questions about what model, what caliber, revolver or semi-auto. The answer to these questions is It is a matter of personal preference. I mentioned in the story above that the situation is one I hoped to never be in. As you are strapping your new pistol to your belt, chest, ankle or other location stop for a moment. Think about it. What would you do if you had to use this weapon to take the life of another?

Yes. I said take the life. That is what the firearm is for. It is for protection when you feel your life is in eminent danger. As you stop and ask yourself the question, what feelings or emotions arise? Do you feel confident in what you are undertaking by strapping the firearm to your body?

There are the more important questions everyone should be asking themselves. During firearms courses, you are taught to never point a gun at anything you do not intend to destroy. This means that if you pull your conceal carry gun, you better intend to use it. If you have assessed this notion and believe you are capable of using your conceal carry, there will be work ahead.

Lastly, think about consequences. Research your state laws to learn what will happen if you brandish your weapon. Think about how actually using your gun is going to affect not only you but your family. Think about how you will be treated after your life has been threatened and then you have taken the life of another. First guess? Regardless of the situation, you will not initially be treated as a hero. Take the time and be prepared. Carrying concealed is a serious matter.