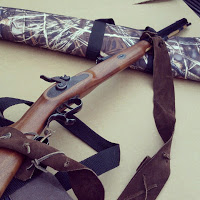 My dad bought me my black powder rifle when I was 12 years old, which was my first deer rifle (before this I had been using a 20 gauge shotgun). We were in the sporting goods section at the store, when I noticed it on sale. I dont remember how much it was, but it was too good a price to pass up. I ended up with a .54 caliber Thompson Center Renegade.

I got the rifle after deer season was over, and I spent the months leading up to the next muzzleloader season practicing with it. I was extremely excited about hunting that year because it was going to be my first time getting to deer hunt in a stand alone. By the time muzzleloader season arrived, I was a crack-shot with my new rifle.

We loaded up the Jeep and headed to the woods the Friday before opening morning (Dad took me out of school early to go hunting). When we got to deer camp we were greeted with my uncle, Paul, telling us about a bear that came under his tree while he had been bow hunting that morning. He said the bear caught his scent and came right up to the tree he was in then stood up and leaned on the tree on its hind legs and watched him for about five minutes before moving on. After giving the bear time to move on, Paul climbed down and hightailed it back to camp.

There were a lot of hunters in camp that weekend so I ended up hunting with Dad opening morning because all the stands were taken. We didnt see anything. Paul killed a buck about daylight. He field-dressed the buck, dragged it back to camp then went back to his stand and killed another buck about an hour later. Since he was tagged out, Paul suggested that I hunt his stand that evening. My chance had come.

I got in Pauls stand about 2 oclock that afternoon and settled in to wait. I didnt see anything all afternoon, and I had watched like a hawk due to that bear being around. The sun started to dip down behind the top of the mountain behind me, so I decided to call it a day. I removed the cap, tied my string to my rifle and started lowering it out of the tree. My rifle was about halfway down when I heard a noise. I looked up and saw a spike coming down the trail towards me. 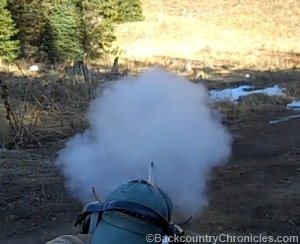 I have no idea how that deer didnt see or hear me trying to get that rifle back up the tree. However I did it, that spike kept coming at me. I jammed a new cap on the nipple with trembling fingers, drew down on Spike and dropped the hammer. Smoke and fire blew out the end of the barrel as the rifle boomed, and I couldnt see a freaking thing because of all the smoke. I heard the deer running then a crash.

I reloaded with shaking hands and probably spilled half the powder then hustled out of the tree. After a little bit of looking I found him. He had run about 30 yards down the bench and keeled over. I had killed my first deer with a perfect heart shot.

About 5 minutes later, my dad came walking down the bench from the direction the spike had come. Dad had pushed Spike along the bench ahead of him on his way to get me. I am not sure who was more proud, Dad or me.

Three bucks were taken from that tree in one day that year and that was how the legend of the Honey Hole Tree started. That may not sound impressive compared to where you hunt but that never happens hunting in the Ozark Mountains, where a deer camp of 10 men might tag 2-4 deer on a good Opening Morning or sometimes all season depending on the year.

We killed more deer out of that tree over the next several years, but never again so many in one day. We dont hunt in that area anymore, but one of these days I plan on going back. Those memories are some of my most treasured.

How old were you when you first went hunting?