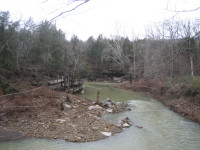 One of the great things about growing up in Arkansas is living so close to the Ozark Mountains and the great camping trips we had there. Our usual spot was a 1-2 hour drive from home depending on which way we had to go in to the camp.

When I was a kid every summer as soon as school let out and sometimes sooner if we could get away, a bunch of us would hit the woods to go camping. Our fall deer camp doubled as our favorite summer camping spot. We usually had at least 2 Jeeps full of dads, uncles and kids. There were several time we had as many as 15-20 of us camped out.

In the days before seat belt safety we were usually all in Dad's CJ5 Jeep. My dad drove, another dad rode shotgun, our tent, all our gear and 5 kids were all crammed in the Jeep. Three of us had to squeeze in the back of the Jeep on top of our gear, one kid was in the dads lap in the passenger seat and one kid rode on center console. We also had the doors off the Jeep. I miss the good old days when we could do stuff like that without getting a ticket. 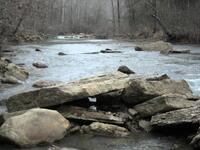 As soon as we reached our campsite, we would pile out of the Jeep and hit the woods or the creek. We usually went straight to the creek if it was running any at all. Our camp was on a high bank above a creek over looking a spring fed hole of water that hardly ever went dry in the summer.

Inevitably one of us would fall in the creek within 5 minutes of getting there which was usually fine, but on those spring and fall trips it was a might chilly.

On the hot summer weekends we usually just played in the creek. Other weekends, especially closer to deer season, we would spend a lot of time squirrel hunting and checking for deer sign or just hiking and exploring.

While we didnt hike in to our camp, our camping was primitive with no conveniences of any kind. We drove nearly an hour from the main road to our camp where the road ended back then so it was isolated. We used the water from the creek for cooking, doing the dishes and sometimes drinking.

Steaks were our customary Friday evening dining choice. We didnt bother with anything healthy like vegetables. Just the steaks cooked out over the campfire and had cookies or Little Debbie snacks for dessert. There is something about a campfire steak that makes it taste so much better. The rest of the time we lived off bologna sandwiches, snacks and sodas.

We usually set up a tent and the dads and younger kids would sleep in the tent. My camping compatriots and I usually slept on the ground out under the stars. Bugs never did seem to bother us much when we were sleeping on the ground. Sometimes you would wake up with a spider or some other bug crawling across you face that you just swatted away. Other times the mosquitoes were so bad that you had to sleep with something covering your head to keep them away. The rest of the time we just scratched a few bites and went on. And we loved every minute of it. 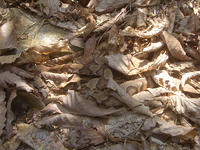 We rarely saw snakes. I guess we made enough noise to scare them off. But there was one time one of us almost stepped on a copperhead that was about 3 foot long which was the biggest copperhead weve ever seen. Most of the larger copper heads you see around here are about 18 long. I helped my friends dad skin it out. Even with it's head cut off, that copper head kept striking at us.

The most fun of all that we had were the vines that grew on the side of the mountain behind our camp. We would find a good thick vine with a clear area down the hill and swing from it. The side of the mountain was steep enough that we could swing out and be really high up. There was only one bad incident with the vines. Early one summer we hit the woods and the first thing my buddy did was run up the hill, grab the old vine from the previous year and swing out. He swung all the way out and just started back when the rotten vine broke. He landed tail first on a pointed rock. I think he might have broken his butt.

Despite some of the minor bumps, scratches and bruises, we all had a whole lot of fun, weekend camping was our most favorite summer past time. I hope a lot of you got to do the same, and if you get a chance take your kids out camping.

What are some of your great camping memories?