Have you ever met someone so dumb they could throw themselves down on the ground and miss? Well this teal season I was thinking that about the local weather tv personality. I mean if brains were leather, he would only have enough to saddle a fire fly. It was suppose to be nice, like cool September weather. Instead, the entire teal season was hot as hell. I just new after last years unbelieveable teal season that we, the pro-staff of Xtreme Flyways, was going to lay down some awesome footage the entire month. Yea, I felt like things were all going my way. The problem was I was in the wrong lane.

The whole season wasn't a bust. But it was tough. We started out in Southeast Missouri on opening weekend. Thought we had a few flocks patterned...nothing both days. So, I called a buddy at River Ridge Outfitters in Carrollton, Missouri. It is a small town in the Northwest corner of the state that lies on the Missouri River. Its a hotbed for Canadian Geese late but I didn't know if it was going to be worth it for September teal. You see teal are very moody, tempramental and can't stay in the same place for long periods of time. Remind you of anybody? Don't read this next to your wife.

Anyway, we made the five hour journey as a team up north ahead of a good cold front that was pushing down. Getting all the cameras and equipment moved that far as well as the staff on such a short notice is tough. You see we not only have to film in the field but we also have to do all of the interviews with the entire staff and go through every detail of what we did or are going to do. I know, this information is about as useful as a pogo stick in quick sand. However, you just have to trust me this is going somewhere. When we arrived it was not much different than down south. HOT! 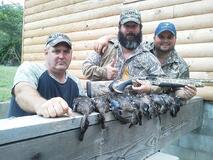 up and started raining teal. From every direction they where coming into the duck hole. We were smiling like goats in a briar patch. For two straight days our Beretta shotguns smacked and I mean smacked the teal. These birds fly so fast with no slow down in them. Filming them is very tricky but we picked up where we left off last season with no hitch in our step.

Now some people would have just set home, called themselves a duck hunter and wiped their ass like normal. Those people would gripe with keys to a new Lexus in both hands. I am not trying to beat a dead horse here...course, can't hurt none either. What I am trying to say is this coming duck season or whatever tough moments you might be going through in life always remember you were created to succeed. Failure only comes when we choose it. My father once told me the definition of a Man or a Woman was the person who stood up for what was right even if they had to stand alone. I choose to succeed even if I have to stand all by myself.