Do Handguns Have Knockdown Power? 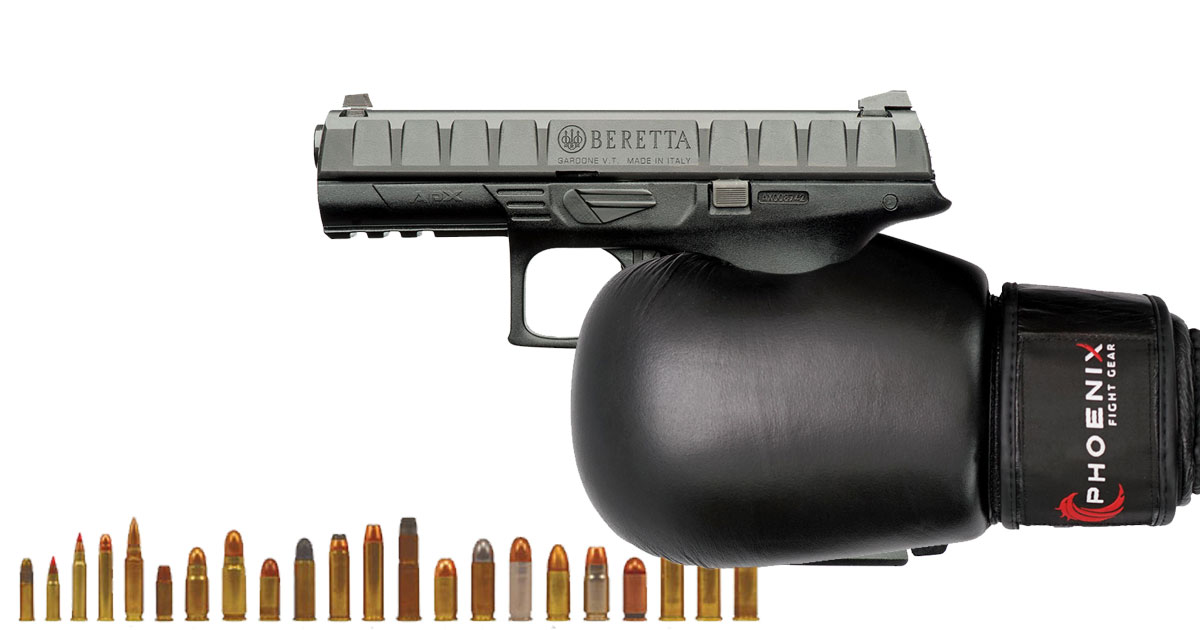 Let’s clear something up. Hollywood does a lousy job of portraying the performance of handguns. Pistol shots cause villains to fly through windows, cars, and buildings to explode and nameless henchmen to surrender by the thousands. In other words, TV and movies show that handguns have serious “knockdown” power. Let’s talk about that for just a sec…

Also See: The Dangers of a False Sense of Security

A lot of people with advanced "post-a-comment-on-the-internet" degrees talk about things like “knockdown” and “stopping” power. While handguns certainly can cause recipients to hit the deck, it’s not as a result of a pistol or revolver bullet literally knocking them down.

Remember that scene in the movie Men in Black? Where Tommy Lee Jones hands newly-minted MIB Agent J (Will Smith) a tiny silver pew-pew-pew pistol? Then when "J" fires it, he’s knocked backward 15 feet right onto his toucas? Well, that’s exactly what would happen in the real world is handgun ammunition actually had “knockdown” power. If your gun were capable of knocking someone down, you would be on the receiving end of some equally vicious recoil.

If someone tells you about the knockdown power of a given cartridge, immediately run to the nearest library and ask to borrow a copy of Physics For Dummies. In it, you might find mention of a guy named Isaac Newton.

While his brother Wayne was busy developing a fine singing career in Las Vegas, Isaac focused on important issues related to the motion of objects. Among his other accomplishments, he came up with that “equal and opposite reaction” theory. If you want to know his exact wording, translated into English, it’s this.

“To every action, there is always opposed an equal reaction: or the mutual actions of two bodies upon each other are always equal, and directed to contrary parts.”

So that’s the simple explanation in Newtonian physics terms. Let’s put that into more practical perspective. In the guns and shooting world, there are two common measures of “power.” I put that word in quotes because I’m taking a surface-level approach to physics.

The first is kinetic energy. Commonly measured in foot-pounds, you can think of the kinetic energy as “destructive power.” While not a perfect analogy, I envision kinetic energy as a power drill. It exerts a lot of chaos on boards and such but doesn’t impart much actual force on an object. When you drill a hole in a piece of lumber, the wood doesn’t go flying across the room. As an example, 9mm ammunition has a kinetic energy measurement of somewhere around 350 to 400 foot-pounds depending on the bullet weight and velocity.

The second common ammo “power” measurement is momentum. This one does represent the ability of the projectile to move an object. If something has lots of momentum, it can knock something else down. That same 9mm projectile might have momentum of about 19 pounds-feet per second.

So the point here is that barring a million other factors, handgun bullets simply don’t have enough energy to knock someone out of their shoes and through a plate glass window.

Yet some (certainly not all) people tend to hit the ground when shot. Why? Well, it could be one or more of a myriad of reasons. Fear is a leading contender. Bodies are naturally disinclined to want to be shot again. Pain certainly has an impact. Sometimes, a structural element like a critical bone is broken, taking away support and causing a tumble. In other cases, a cause might be “electrical” damage. A disruption in the ability of the brain to communicate with muscles can cause all sorts of weird things from collapse to erratic movement.

Don’t believe me? Next time you have an opportunity, take a 25-pound bag of sand to the range and prop it up on a stool. Heck, you can even stick something on the front, so the bullet doesn’t pass through, thereby delivering all its “oomph” to the sandbag. Guess what’ll happen when you shoot it?