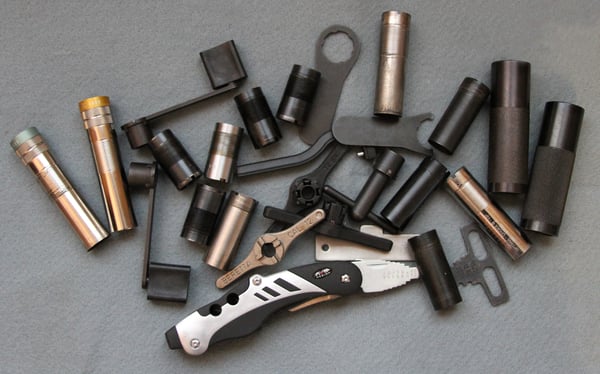 The choke tube wrench adapted to fit into the arbor of a cordless drill driver is apparently an urban legend – at least from the perspective of it being made commercially. Yet I’m sure a Frankenstein-ed version has shown up at the clays course on more than one occasion. Some shotgunners seem that addicted to changing choke tubes. No one needs a powered choke tube wrench, but watching some shooters on the sporting clays course, it seems like it’s an invention that would speed up their play.

Also See: Does How You Break Targets Matter?

The ability to conveniently change choke tubes is a good thing … I think … until it becomes a distraction … which doesn’t take very much. If the choice is between spending time estimating yardage to select the “perfect choke” and spending more time determining break point, hold point, and pick up point and visualizing breaking the targets, your score will benefit far more from the latter than from the former.

The control choke constriction has on a shotgun’s pattern is important, but can be overblown. If choke selection is so mission critical, how did shotgunners of yesteryear – before there were changeable chokes – ever drop birds or break challenging targets? There’s a case to be made that choke is less important today than it was back then. That’s due to the engineering and the quality of components in modern shot shells. All else being equal, today’s superior powders, harder and rounder shot, and soft-launching and shot protecting wads pattern tighter than their ancestors.

Most quality field shotguns today come with at least three choke tubes labeled improved cylinder, modified, and full. Sporting guns often come with two more which are labeled cylinder or skeet and improved modified. These names are relative. “Cylinder” is supposed to (and usually does) mean no choke. The bore of a 12 gauge nominally measures .73 inches so that’s the inside measurement of a cylinder tube.

In order of least to most constriction, the full list of choke tube names includes:

In shotgunning, performance is the bottom line. The standard constrictions are supposed to result in the following percent of the shell’s payload of shot falling inside a 30-inch circle at 40 yards:

Again, these are standards. Actual performance will vary based on the load and even the individual gun from which it is fired. However, except for the actuaries, auditors, and mathematicians in our ranks, few shotgunners actually enjoy counting holes in paper and doing the math. Simplifying choke selection puts the fun back into shooting and removes a potential distraction that more than offsets any possible benefits of selecting “the perfect choke.”

For “Big Three” clay target shooting in the U.S. – that’s trap, skeet, and sporting clays – you definitely do not need a turkey or extra full choke, so drop them from the list. Either a cylinder or a skeet 1 will perform masterfully for those incoming skeet-type targets shot at a few yards –pick one or the other. You’re not going to notice a whit’s difference between improved cylinder or skeet 2 either – so pick one and live happily ever after. Improved modified or full is pretty close to a tossup, too, so just pick one. That leaves modified standing alone. It’s a super all-rounder, especially in the field. You need one.

That gets us down to four tubes. No matter which clays game I’m shooting, my choice is to err on the side of the pattern being too open rather than too tight. At least for shooters shy of expert ability, allowing margin for error with a larger pattern enhances scores. If you’re worried about enough pellets in the pattern, go with smaller shot sizes. You may not see as many soot ball breaks, but I don’t know of any shotgunning game that scores those higher than the 2-pellet chips and chunks.

I’m speaking from personal experience, but I know for certain my scores at sporting clays go down when I’m changing chokes frequently or worrying about choosing between 7 1/2s or 8s and light loads vs. handicap loads. They go up when I put an IC tube in the barrel of my semi-auto, fill my shell pouch with light 8s, and leave the rest of the tubes and the heavy 7 1/2s in the car.

As in so many of life’s pursuits, your performance will improve and you will enjoy yourself more if you simplify … simply simplify!