Years ago, I had a feeling that lasers were a good thing for a self or home-defense gun. I’d only used them on the range for practice, and at home dry firing, but it just seemed so sensible to me. All of the “marketing messages” sounded pretty rational.

“You can focus on the threat and still aim accurately.”

“They help you aim in low light conditions, when most self-defense encounters occur.”

“Lasers allow you to shoot accurately from unconventional positions.”

There are more marketing benefits, but you get the idea. Anyway, it all sounded good enough to me to install laser grips on my self-defense handguns.

Then, in the summer of 2013, I competed in the Crimson Trace Midnight 3 Gun Invitational event. That was an epiphany. What was until that point theoretical, became very real. Running around in the pitch dark, trying to hit targets as quickly as possible, showed me first hand the value of lasers. I could keep the gun at low ready while I was searching, yet engage targets without assuming a full stance and normal sight picture. Since I was searching for targets, I could keep my focus on the target, yet still engage. And it was fast. Way, way faster than finding my night sights.

I became a believer, big time, and even increased my level of “believingness” when I did more training and competing in the dark.

Having had my own epiphany, I get befuddled when I hear folks pooh-pooh the use of handgun lasers and repeat the age-old myths about lasers. The funny part is that 99.9% of the people who gleefully repeat those dusty laser myths have never actually used one with live fire in the dark.

Let’s take a look at some of the classics.

Using a laser will just give away your position! 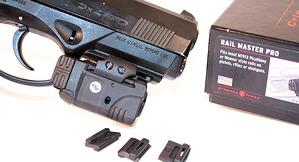 Well, if we’re talking about a home invasion in the middle of the night, me and my spouse yelling  “Get out of our house, we’ve already called 911!” is what’s going to give away my position.

Hollywood has perpetrated some pretty unrealistic scenarios when it comes to defensive encounters. Too many people envision a home-defense event resembling that scene from Silence of the Lambs, where people with guns sneak around like Ninjas trying to find each other in the pitch dark so they can have an epic gun battle. If you’re the unfortunate victim of a home invasion, I can pretty much guarantee you won’t be playing hide and seek with a squad of highly trained gunfight commandos. In reality, it won’t much matter if someone sees your handgun laser beam as it will immediately be followed by a speeding bullet heading in the same direction.

If your gun is out, and your laser is on, you are already in a gunfight so you might want to use every possible advantage to get your shot on target quickly.

If you can’t get past this myth, then invest in some quality training from a reputable self or home-defense trainer.

A laser is a crutch for poor shooting technique!

I hear a lot of variations on this one.

“If you need a laser, you don’t know how to use iron sights.”

“Using a laser will degrade your ‘proper’ shooting skills.”

“People should learn how to shoot correctly.”

And so on. These arguments drive me crazy. Would you ever not use the power windows in your car because it might degrade your manual window crank skills? Would you toss the microwave because you might forget how to use a frying pan? Luddites, unite!

Of course you should learn the basics, including the use of iron sights. In fact, lasers are a great tool to help you learn fundamentals like sight alignment and trigger control. Why on earth would you give up every possible incremental advantage? If you’re fighting for your life, you want every possible advantage on your side. The iron sights will still be there. If you laser is fried by a sudden solar storm, or your attacker disables your laser with a portable EMP nuclear device, you always have your iron sights.

Lasers don’t take away any capability, but they certainly do add options. You can focus on the threat and still aim. You can aim from unconventional positions or from around barricades. The more options, the better, right?

OK, hotshot, what are you gonna do when the batteries run out?

I actually had a gun range safety officer lay that statement on me once. As with the previous example, I have to assume folks who are genuinely concerned with this argument don’t drive or operate electrical lights. After all, you could run out of gas or blow a fuse! Why risk it?

As with any technology, it’s up to you to pay attention. Change the batteries once in a while. Put night sights on your gun anyway, in case your batteries do run out. Choose a laser with a positive on/off switch, so when you’re practicing at the range during the day, you won’t run your batteries down. Lasers have become exceptionally durable and reliable. Like any product that has life and death implications, don’t go cheap. Buy reputable and proven equipment. Don't refuse all the advantages of new technology because the battery "might run out."

More important than debunking specific myths, stop and think the next time you hear statements like these tossed around. We humans have a terrible habit of hearing something and simply passing it on without really thinking through it. When myths like these get passed around often enough, far too many people take them as truth.