Smaller caliber guns aren’t necessarily just for newer shooters. If you want to become an expert, practice with a light-kicking gun might be just the ticket.

The classic example is a .410 shotgun. Folks assume that since the .410 is small, light, and shoots a low recoil round, then it must be great for new shooters. With some exceptions, I think the opposite is true.  The .410 is really an expert's gun. If you see someone slinging a Beretta 687 Silver Pigeon on the skeet range, chances are they know what they’re doing. It’s hard to bust a moving clay target with a small shot charge. But if you can, then repeating the action with a 12 gauge will seem as easy as hitting water with a boat.

There’s a similar scenario with .22LR handguns. While it’s not harder to hit a target with a .22, I think a .22 pistol is just as appropriate for an advanced shooter as a beginner.

If you want to become an expert shooter, you need to master trigger press. Perhaps the best way to build outstanding trigger press skills is through daily dry fire practice, like the drills we exaplin in the Trigger Pull Drill article. Yet most new shooters are going to get bored with dry fire. Don’t get me wrong. I’ll always encourage lots of dry fire practice, as part of your handgun training. The best professional shooters in the world practice dry fire drills every day. But let’s face it. New shooters want to shoot! So let’s skip the dry fire stuff for now and talk about ways to become a better shooter while actually shooting.

Enter the .22 long rifle caliber pistol. It's not just for beginners.

I regularly shoot guns of all types, in dozens of calibers. It’s all fun. But if I’m honest with myself, I’ll always claim a good .22 pistol as my favorite. Why? It’s the purest form of achieving the joy of shooting, without any of the downsides. No loud explosions right in front of my face. No harsh recoil. No blistered hands from the grips or trigger guard grating against my skin with each shot. No four digit ammo bill. No neighbors complaining about noise from three miles away. Just the fun of finding a target, pressing the trigger and hitting it. 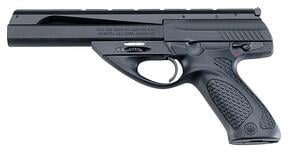 The real benefit of shooting a .22 is not so much the lack of downsides of larger cartridges, but the ability to easily focus only on the quality of your trigger press. Without the anticipation of noise and recoil, you can focus 100% of your brain activity on the trigger finger movement, even after the shot is fired. It’s like dry fire with benefits!

When practicing with a .22 pistol, I like to pick small targets. Aim small; miss small. Focus on nothing but the front sight and a deliberate and slow trigger press. I mean s — l — o — w. Glacially slow. Don’t try to yank the trigger when the front sight is just where you want it. Instead, try to keep the sight on the target while you’re being slow on the trigger. I guarantee you will hit what you’re aiming at if you exclude everything else in your world except the front sight and a slow and deliberate trigger press.

While it will be satisfying to hit your tiny targets as you learn how to slowly press the trigger without moving the gun, there’s an even bigger benefit. You’re training your brain and your muscles on the proper trigger press. So when you switch to a larger centerfire pistol, your brain will be conditioned to repeat a smooth, not jerky, trigger press, even though there is recoil on the way.

If your goal is to have fun and build good shooting habits, you can use most any .22 pistol. It doesn’t have to exactly match your gun. Check out the Beretta U22 Neos. With space age looks, it will get attention at the range. More importantly for this purpose, it’s ridiculously comfortable and easy to shoot accurately. While I like the Neos, I’ve been Jonesing for a model 87 Target model. Very similar in feel to my Beretta 92FS, it would make a great complementary practice piece.

If you really want to practice with the feel of your regular gun, consider a .22 conversion kit. If you own a Beretta 92 or similar model, check out the Model 92 Practice Kit. It includes a slide, barrel and magazine that mount to your gun’s frame, thereby converting it (temporarily) to a .22 pistol. You’ll have the same grip and trigger pull, so you’ll develop good habits with your normal gun. If you don’t own a Beretta 92, practice kits are available for a wide variety of handguns, so shop around.

You may find that, after shooting a larger pistol for a while, you start to miss. That’s probably because you’re letting the anticipation of recoil slip back into your brain. No worries.  Just break out the .22 again. In fact, take it to the range every time you go and shoot it first to warm up. You’ll reinforce the good habits, remember some of the pure joy of shooting a .22, and save a little money in the process.